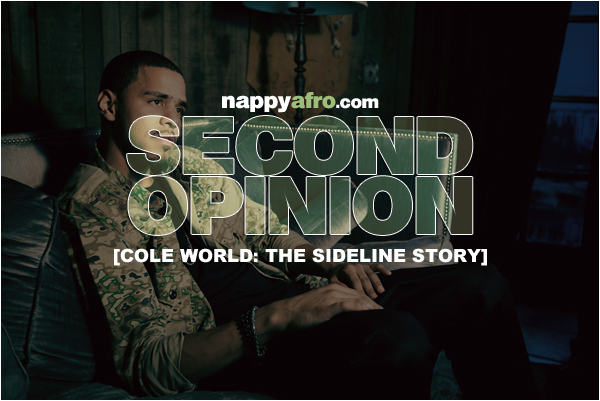 We already heard what the homie DJ LP had to say about J.Cole’s debut studio album. We give it a second look in what is quickly becoming the fro’nation’s favorite recurring article. Hear what the rest of the staff thinks on such a big album, as we each talk about Cole World: The Sideline Story. – Saule Wright

Saule Wright
J. Cole was in a position that not too many new artists have found themselves in lately, being quite honest, we can say it’s unprecedented. Jay Z, love him or hate him, is probably one of the most popular rappers in the last 15-20 years. Having him co-sign you means that you gotta come out correct. Add to that some extremely strong mixtapes and you have the perfect storm to flop. I’m glad to say he answered the call and didn’t fold under the pressure. The beats on here are dope with only 1 or 2 songs that I wasn’t really wowed by, subjects were varied, and his delivery was on point. I’ve heard folks criticize the bars and sure, there are some questionable ones but when you include this many songs, that may happen. Even still, they don’t dominate the album. I think the storytelling moments about his signing and such add to the enormity of this album for his career and complete it as well. Had he dropped about 4 or 5 songs from this project, I think we’d be in rare air nowadays (5 Stars). As it stands, this is a tremendous debut effort from J.Cole. He faced the hype dead on, delivered, now has to overcome the hype, the cosign, a dope album, AND strong first week sales for his second album. Good luck bruh.

DuB
The first time I heard about J. Cole is when news broke that Jay had just signed Rocnation’s first artist. I remember thinking “so?”. Jay has been known to sign some pretty mediocre talent (Bleek, and all the cats in State Property not named Young Chris, Beans, and Freeway) and then Blueprint 3 dropped and I heard “A Star Is Born”. I remember thinking he was going to be one of the nicest newcomers since Drake. I went on and fell in love with all of his music and became a huge fan. Now it has been about two years since “A Star Was Born”, and we have the album that will act a foundation to the rest of his career. On Cole World: The Sideline Story we find J. Cole on the stage that he has been waiting to perform on his entire life. It is very obvious that he enjoyed making this album. We get a story of a young man who very intelligently paints a picture of the world from his pint of view. From songs like “Lost Ones”, “Lights Please”, and “Never Told” to songs like “Mr. Nice Watch”, “Can’t Get Enough”, and “Work Out”; he creates his world and it becomes very easy to understand that he sees the world as a multilayer of emotions. The question of how good the album is has been going around for awhile. Some say it could’ve been an instant classic, while others say it isn’t what it should’ve been. Point is, we could’ve taken 10 songs from all of his projects and made a 10 track album that could’ve been comparible to Illmatic (I have the tracklisting ready if you want to challenge me). This album isn’t an instant classic, but what is? Classics all have to pass the test of time, and the only thing keeping me from calling this “Classic” is it hasn’t been out long enough. Yet I will be willing to say very early, that 10 years from now people will want to ask him about this album because of the status of “Classic” it will attain.

H20
Three years ago, I don’t think anyone would have been able to guess that the first signee of Roc Nation would be heralded as Hip-Hop’s last great hope. They also wouldn’t have guessed that his debut album would be expected to be a classic by people who’d only heard three mixtapes. Yet somehow, three years later, J. Cole is here with what has to be album of the year. Despite the rumors that he was getting dropped, no hit singles, and competition from his boss for the aforementioned honor, my first spin of Cole World: The Sideline Story exceeded all my expectations. Does that mean that I thought this would be a classic debut album? No, because I don’t believe in instant classics; we can talk about where J. Cole’s catalog stands 5-10 years from now. What I do know is that this undoubtedly an exceptionally well-crafted album and the best debut album of any Hip-Hop artist since Food & Liquor in ’06. You don’t really have to agree; most of the people who listen to this album right now are going to still be caught up in ridiculously high expectations they had for this album. When you put that aside, you’ll see that while time will tell whether or not Cole released a classic, what is important is that he released one of the best hip-hop albums of the year and should be proud of how his debut turned out. With music like this, it won’t be long before he’s off the sidelines and leading the league.

B-Easy
I think Cole World: The Sideline Story is more about the moment. Not to say the album isn’t good because it’s a great debut for J. Cole. But it feels as if most of Hip-Hop is genuinely happy for Jermaine not to only finally drop his debut album but to have a spotlight on rap music that doesn’t feel dumbed down and is multifaceted. Add to the fact that we’ve literally seen this kid working to this point for the past three years; Cole World is an accumulation of all of this. Classic? I don’t know. There’s still a lot of cringe-worthy lyrics here (That “you can’t out-fart me” line on “Dollar And A Dream III” still fucks with me every time I hear it). But as most of my homies here at nappyafro have already said, it’s too early to start placing that stamp on this album. But damn, this is an exceptional start to J. Cole’s career.