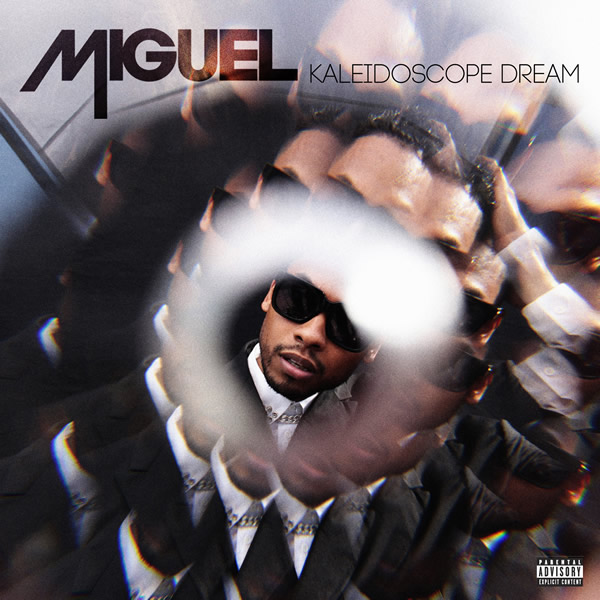 Miguel’s sexuality has been questioned since he stepped on the scene. I am one of those that questioned it a little also. He has Little Richard-esque hair, wears tight fit formal clothing, and was small in stature. I was just making assumptions. But my “gaydar” was off because he has a long time girlfriend. She is quite attractive to say the least. She can be a Certified Banger. But sexuality does not matter when it comes to creating music. Frank Ocean has made sure of that. So let us just talk about what we see through the Kaleidoscope after listening to Miguel’s new album.

1. Adorn
Produced by Miguel
Tamia’s “Beautiful Surprise” is still my favorite grown folk song. But “Adorn” has found a spot if I want to seem cool to the young generation. He commands the track with his version of a Bruce Lee “wah” in the background. He also shows that it is not all studio work by performing it live on a radio show not too long ago. This should be the hottest R&B song on the radio right now. I cannot confirm it since I do not listen too much of the radio but maybe one of you can.

2. Don’t Look Back
Produced by Happy Perez & Miguel
I thought I hit the wrong button when this first came on. I thought this was the new single from Hoobastank. The album took a drastic change from “Adorn.” He shows his range yet again near the end where he speaks on his cheating ways. The track has three layers. All might not be appreciated but it is all touched on.

3. Use Me
Produced by Pop & Oak
The song is addictive. The guitars get to you and you cannot escape. It speaks on how sometimes you want a woman to take control and use you like a Law & Order: SVU victim every once in a while. No Stabler.

4. Do You…
Produced by Jerry Wonda
It is a sprinkle of Taylor Swift on the beginning of this one. Then the bass kicks in and you are taken on a floating journey. I do not like drugs but I like where this dream is going.

5. Kaleiodoscope Dream
Produced by Salaam Remi
I found myself trying to sing the words without knowing them at all. I got lost in the dream. It is just that enticing. 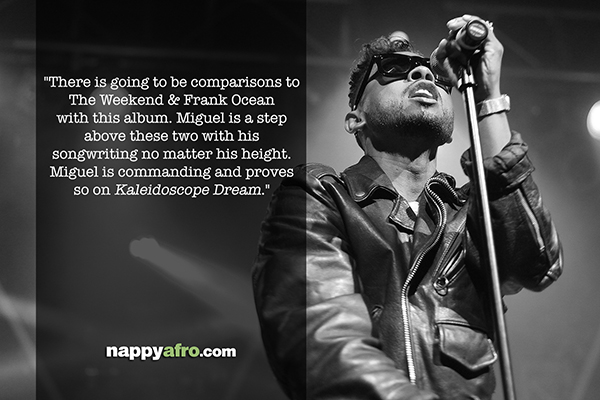 7. How Many Drinks?
Produced by Salaam Remi
This is the going home from the club track. Miguel wonders how many drinks it would take for a lady to tell her home girls she will find her own way home. Miguel’s confidence is on another level on this one. He even ventured off into a Ryan Leslie with rapping a little bit. It is not out of place however.

8. Where’s The Fun In Forever
Featuring Alicia Keys; Produced by Miguel & Phatboiz
He takes us to church with this one with a nice little drum kit to add to the mix. This is when it comes to the production. It is quite ironic after a song about taking a girl home.

9. Arch & Point
Produced by Pop & Oak
The album is getting quite freaky at the end. Sex is prevalent here. I would have not got that from the title. The arch is the young lady’s back and the point is to point her toes. I should have said spoiler alert. You probably are smarter than me. I was thinking bows and arrows.

10. Pussy Is Mine
Produced by Miguel
The simplicity of this track just resonates with me. It is a track I could sing on my way to class. I have caught myself doing it today. Sometimes you just need a little ignorance. This is my favorite track on the album. It was a risk but the award it there. The reward is there.

11. Candles In The Sun
Produced by Miguel
He makes his final risk on his closing track. He questions the presence of God. The groove is not lost but it stirs up some questions. It does not matter an artist’s religious belief if the final product of music is this.

Bottom Line:
There is going to be comparisons to The Weekend and Frank Ocean with this album. Miguel is a step above these two with his songwriting no matter his height. I have brought up commanding multiple times but that is what he does on Kaleidoscope Dream. There are basically no features. Miguel handles a lot of the soundscape of the album himself, inviting only a select group of veteran producers in. You only dream about R&B albums like this but it has come true.