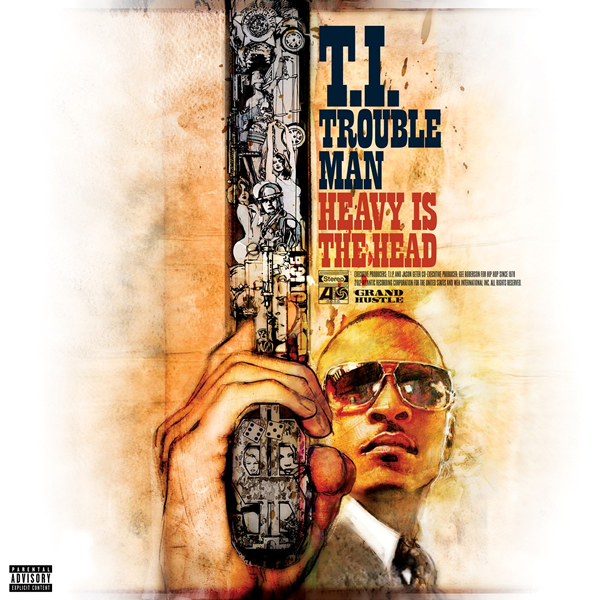 T.I. and I have a weird type of relationship. I think he is one of the most talented artists, but I don’t like most of his music. I’m a big fan of I’m Serious and Paper Trail but most of his other music has been pretty average in my opinion (I know most people don’t agree). Here though, we have Tip in an awkward position. He could go in one of two directions. He can do an album that is pretty introspective, I.E. Paper Trail, or he can get back to the party like most of his core fans are in demand for.

This album is going to show people where Tip stands. He is either still one of the most exciting emcees in the game, or he is now a has-been. It’s hard not to think that he is categorized in the latter. I mean whenever a rapper does a reality show I feel like their career is pretty much over as a rapper (Jim Jones, Juelz Santana, and Game).

Is T.I. still the King of the South, or has he been dethroned? Only time will tell, but this album will serve as a nice indicator. Let’s get into the album.

1. The Introduction
Produced by Tommy Brown & Travis Sayles
A classic Marvin Gay sample is always a great way to start an album. Tommy and Travis do a great job of flipping the sample. T.I. is one of the best at starting albums off with a great song that keeps your anticipation up for the rest of the project. This is no different.

2. G Season
Featuring Meek Mill; Produced By Cardiak & Chinky P
This is pretty much filler. That’s not a great thing this early in the album. It’s not terrible, but it really isn’t anything special either.

3. Trap Back Jumpin’
Produced DJ Toomp
This is the return of the King. He reminds me of Trap Muzik T.I. right here. He is just on his game right here. Toomp laces him with a great track right here. T.I. is talking that shit too.

4. Wild Side
Featuring A$AP Rocky; Produced By No I.D.
This is really my introduction to A$AP Rocky. I mean I’ve heard some of his music before, but I couldn’t take someone who calls themselves pretty too serious. He does his thing, but the show is T.I.’s. His second verse is unbelievable as he begins explaining some of his mischievous actions as an adolescent.

5. Ball
Featuring Lil’ Wayne; Produced by Rico Love & Earl & E
Remember a couple of years ago that these two had the game on lock. I mean even with Jay-Z, Nas, and Eminem making reappearances in the game, these two ran it. They both have done some time recently, so it is only right that Tip brings us a track with Weezy F. This is just a fun song. This is for the party and I can see a lot of women dancing to this. Sometimes Wayne sounds so bored, but here he actually sounds motivated. It isn’t a ground breaking track, but It’s fun.

6. Sorry
Featuring Andre 3000; Produced By Jazze Pha & Sir Clef
This is the first serious song on the album. T.I. comes hard with this. The instrumentation gives this track a dramatic feel and it is hard to believe that Jazze Pha produced this. This is one of my favorite songs that he has produced in recent years. T.I. does a great job of showing you the way he sees the world in his eyes. Andre 3000 comes in and takes the track to the next level as well. He has me so mad, while Big Boi is dropping garbage albums, he is killing the feature game right now, but we need that album. This is easily my favorite track on the album.

7. Can You Learn
Featuring R. Kelly; Produced By DJ Montay, Jamezz Bonn, & Mr. Jonz
This is one of the tracks that every T.I. album must have. This is for the ladies, no doubt. R. Kelly handles the hook. I know some people will love this, but it isn’t for me.

8. Go Get It
Produced By T-Minus
This is, honestly, kind of boring. I mean it isn’t bad, but it isn’t good either. I can’t say that I hate it, but when I listen to this album, I just wait to it to finish so we can get to more exciting stuff.

9. Guns And Roses
Featuring P!nk; Produced By T-Minus & Nikhil Seetharam
I wouldn’t be surprised if this is the next single. Tip tackles relationship issues and trying to make his woman happy, but how at times he feels that if she was a dude he would go and put his hands on her. P!nk does her thing on the hook. This song slightly reminds me of Eminem’s “Love The Way You Lie” with Rihanna. 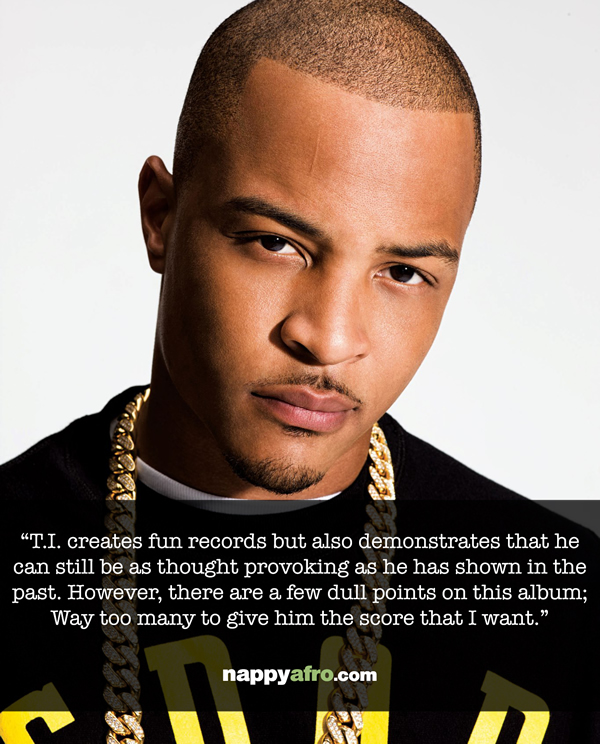 10. The Way We Ride
Produced By 1500 Or Nothing
This is going to remind you of some UGK classic music. I’m loving this. This is the type of music that you play while rolling through your city.

11. Cruisin’
Produced By Lil’ C
I’m guessing this is for the ladies. This is an awkward attempt of doing something the ladies would like. When the song starts there is a guy singing. I couldn’t figure out who it was, and I was patiently hoping T.I. would come in and save the track. I had to listen to this twice to figure out that the dude singing was Tip. This is a skip. Maybe skip of the year!

12. Addresses
Produced By T-Minus
Here he gets back to the hard rapping. I love the beat as it only exemplifies the aggression that Tip is trying to convey. This is obviously a diss song to a specific artist. I have my idea of who he is talking about, but he never says any names so your guess is as good as mine. He admitted this was about another ATL artist though.

13. Hello
Featuring Cee Lo Green; Produced By Pharrell
This cut is produced by Pharrell. He does a nice job crafting a nice mellow song that Cee Lo sounds comfortable on, but also allows T.I. to be himself. He is speaking to the haters with this one. He is acknowledging that he sees them but doesn’t respect them. This is a nice cut.

14. Who Want Some
Produced By DJ Toomp
It is always hard to listen to a DJ Toomp beat and try and decode the lyrics, because you just want to vibe out and enjoy the instrumentation. T.I. is one of the only rappers who are interesting enough to ride over multiple beats by Toomp on an album and you not get lost in the beat. This is T.I. talking that stuff the only way he knows how to do. He is accepting all challenges, Who wants some? He even pokes fun at the feds, “Tell the ATF I got three 380’s left”.

15. Wonderful Life
Featuring Akon; Produced By Sanchez Holmes
This is an interesting track. The concept of the track is eerie. He spits a rhyme about telling loved ones how blessed they are from the grave. Imagine the video for “I Ain’t Mad At Cha” by Tupac, that is what the first two verses are. That is the visual I have when I listen to this. The last track is dedicated to his homie who was slain. This is one of my favorite tracks.

16. Hallelujah
Produced By Planet VI
This song is going to grab your attention immediately. The very first thing you hear is “Jesus loves me” sung by what sounds like Kelly Rowland (It’s not by the way). The song is very introspective, and a perfect way to end this album. He speaks on all of the traps that he has fallen into that has lead to trouble. He seemingly has accepted his mistakes and looks at them as learning tools.

Bottom Line:
I didn’t talk much about the skits, but they are pretty crucial to this album. He places them cleverly between tracks (almost like good kid, m.A.A.d. city) to add to the story. He goes through a few instances of himself getting in trouble (Even the BET Hip-Hop Award fiasco when he got arrested) and you get to hear the story from his point of view.

T.I. creates somewhat of a hybrid here. It has some real deep and introspective parts of the album like Paper Trail, but it also has some of the qualities that many of Tip’s fans missed as far as bringing the party music. Do I think this is Tips best album? No! Do I think that the King has been overthrown? No! Although Tip doesn’t reinvent the wheel with this album he does do what he has always done well. He creates fun records, but also demonstrates that he can still be as thought provoking as he has shown in the past. However, there are a few dull points on this album. Way too many to give him the score that I want. If he takes off three of those records like “Cruisin'”, “Go Get It”, and “G Season” this album is a 4 or even a 4.5.