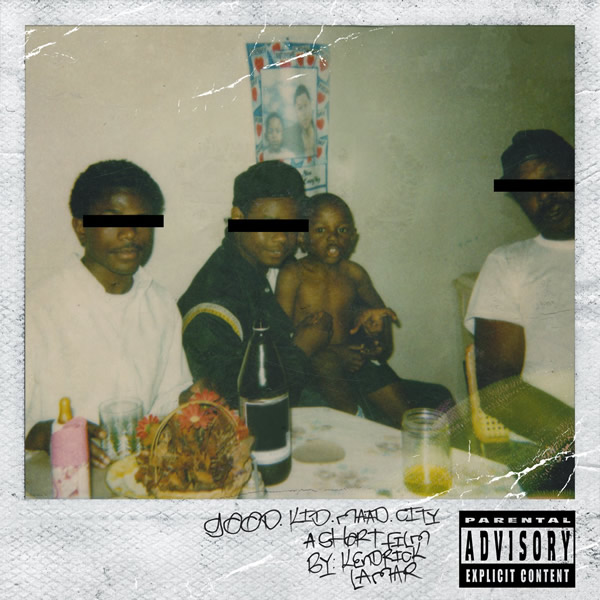 For the past couple of years, Kendrick Lamar has been bred for this moment. Co-signs have been made, torches have been passed, and the West Coast Hip-Hop crown has been all but presented to Kendrick. The only thing is now he has to grab it. Last year’s Section.80 raised his profile but this is different. This is the major leagues now. With good kid, m.A.A.d city being Kendrick’s first album on a major label, this is his moment on a major stage. And a lot is riding on this too. Besides kicking in the door further for his TDE/Black Hippy brethren, K.Dot has been getting a big push from the good Dr. Dre himself as well as having a whole coast on his shoulders. Is Kendrick up for the challenge? Let’s take a trip with a good kid through a m.A.A.d city.

1. Sherane a.k.a Master Splinter’s Daughter
Produced by Tha Bizness
The album’s introduction not only starts off the story that is good kid, m.A.A.d city, it also shows Kendrick Lamar’s talent as a storyteller. He raps about his meeting of a girl named Sherane at a house party, but the details and foreshadowing on the way he tells the story brings the rhymes to life. The production by Tha Bizness has a dreamy feel to it and makes the moments described seem like they were all happening in slow motion. As for the title: Master Splinter’s Daughter = Hoodrat?

2. Bitch, Don’t Kill My Vibe
Produced by Sounwave
Kendrick has a lot subliminal and deep lyrics here, but in the end the main thought is just as the title says: “Bitch, don’t kill my vibe”. That may be the reason why this song grabs people; who doesn’t want to say that phrase? So far, this song is the one I most hear being played off this album. The laid back beat and sing-a-long chorus helps a lot too (Kendrick’s multiple flows here also must be pointed out). Crazy thing: Lady Gaga was suppose to be featured on this song (I wonder would it have sounded like this).

3. Backseat Freestyle
Produced by Hit-Boy
After two somewhat mellow tracks, things speed up with “Backseat Freestyle”. I picture a 16 to 17 year old K.Dot sitting in the backseat of his friend’s speeding car and spittin this. And he kills it not with just with braggadocious and bold lyrics but with change in flows. He goes Orenthal James Simpson on the third verse:

If I was to compare this to anything it would be Lil’ Wayne’s “A Milli”, but that in no way is to take anything away from this song; it stands on it’s on. And how the hell did Kanye let Hit-Boy give away this beat? Shit is crazy. It’s also serves as a intro to the next track…

4. That Art Of Peer Preesure
Produced by Tabu
Another good example of Kendrick’s storytelling ability. As he is talking about the ills of peer pressure you are right with him; You know that he riding shoulder to shoulder with his homies in a car, you know that they rocking basketball shorts and probably played ball earlier in the day, and you get all this from the first few lines in the song.

Recognition must be also given to the production by Tabu. The first minute and a half of this song is totally different from the main part of the actually track and to most artists, that would be enough for a great song on it own. But here it’s just a well done intro for the hard edge main portion.

5. Money Trees
Featuring Jay Rock; Produced by DJ Dahi
The flow Kendrick uses here seems to drop in quality but on further listenins, you find that the flow is just as good but the delivery has changed:

Now that I think about it, the sound reminds me of Outkast songs like “Liberation” (Especially Anna Wise’s portion). Jay Rock shows up as the only Black Hippy member to make the album (Not counting bonus tracks) and delivers a verse to fit the feel of the song. Even though the subject matter isn’t relaxing this is a good song to vibe out to. Ya bish.

6. Poetic Justice
Featuring Drake; Produced by Scoop DeVille
It seems right that Drake & Kendrick Lamar would make a song that samples Janet Jackson and then title it after a movie from the 90’s. Both have showed love through song for another 90’s R&B singer in the past and both are basically kids showing their 1990’s upbringing. While the production is pretty straightforward sample wise, a song like this had to be on this album to round it out and also give one for the ladies. Don’t be surprised if this turns out to be a single. (Sidenote: The end of the song has a skit that connects right back to the main story taking place after “Sherane a.k.a Master Splinter’s Daughter”).

7. good kid
Produced by The Neptunes
This conveys the feeling of Kendrick just falling deeper in the trap that is his city. It also once again shows his talent telling a story. The first verse deals with him getting stomped out by gang members even though he has no affiliations (“For the record I recognize that I’m easily prey/I got ate alive yesterday”). The second verse deals with him being harassed by the police afterwards (“Step on his neck as hard as your bullet proof vest”). The final verse has him in his room filled with stress, frustration, & drugs (“The silence in this room/With 20 Xanies and ‘shrooms”). Props to The Neptunes on the production too because this is not a sound you usually hear from them. With Pharrell on the hook, “good kid” has the feel of a spacey 1960’s psychedelic drug trip but still it connects with the intensity of K.Dot’s rhymes.The song also serves as the “cause” to the next song’s “effect”. 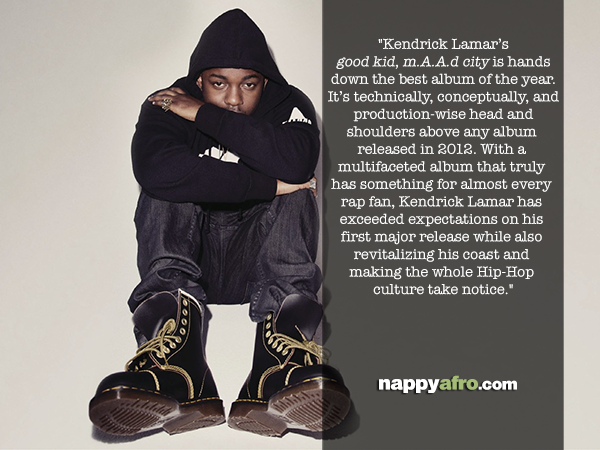 8. m.A.A.d city
Featuring MC Eiht; Produced Sounwave, THC, & Terrace Martin
The first half of this song is just aggression over menacing production. Kendrick goes on the offensive and starts his assault with one long verse as the good kid goes m.A.A.d:

That was back when I was nine
Joey packed the nine
Pakistan on every porch is fine
We adapt to crime, pack a van with four guns at a time
With the sliding door, fuck is up?
Fuck you shootin for if you ain’t walkin up you fuckin punk?
Pickin up the fuckin pump
Pickin off you suckers, suck a dick or die or sucker punch
A wall of bullets comin from
AK’s, AR’s, “Aye y’all. Duck.”
That’s what momma said when we was eatin the free lunch

But that’s just the first two minutes and a half. MC Eiht, who adds his own verse and sounds great here, appears and brings the second half of “m.A.A.d City”. The song samples Five Stairsteps’ “Don’t Change Your Love” and I point this out because that song was also sampled on Ice Cube’s “A Bird In The Hand” and appropiately Compton’s Most Wanted’s “Straight Checkn ‘Em”; two rap acts from Kendrick’s city. The track is very well put together and story wise may be looked at as the climax. Also giving in this song the meaning behind the album title: “Compton, U.S.A. made Me an Angel on Angel Dust”.

9. Swimming Pools (Drank) (Extended Version)
Produced by T-Minus
I think “Swimming Pools (Drank)” wins on a few fronts. While most lyrically talented rappers with substance like Kendrick have to dumb down the flow for a hit single, here he is rapping about his grandfather’s flask & speaking as his own inner conscious on a “radio single” and the shit still works. And let’s talks about that second verse where he starts out in another voice rapping as his conscious. I was surprised when I saw him do the song live and realizing that it’s not all studio tricks; that’s just Kendrick. And talent.

The first song “Sing About Me” is really intricate on different levels. On the first verse Kendrick plays the role of his deceased friend’s brother who calls Kendrick to show gratitude over how Kendrick held his brother after he got shot and died. On the second verse he plays the role of the sister of Keisha, a girl who was the subject of a song off Section.80. She gives him a hard time for putting her sister in a song and ask what did he have to gain by doing it (Sidenote: The two characters for the first verses are related to add more layers to the story). On the final verse Kendrick, as himself, asks hard questions and then answers the questions from the previous verses. The sound of the song are melancholy with that even coming through more because each character dies at the end of the verses (One gets shot & one fades away).

On “I’m Dying Of Thirst”, Kendrick, still wanting revenge after his friend is shot, gets reflective on the reason of his wrong ways as well as the violent ways of his city. The dying of thirst K.Dot speaks about could be the need for God in his life or just hope in general. His cadence matches the drums of the production as the singing in the background makes the reflection more so poignant.

I haven’t mention the skits a lot in this review yet but those added to these songs make this track a movie in it’s own right.

11. Real
Featuring Anna Wise; Produced by Terrace Martin
As the song title says, this song is about real. More specifically, the need of self love to be so. Kendrick talks to women and men about material gains and how it doesn’t matter in the end if you don’t have love for yourself. To prove the message is universal, all the three verses here are similar. This is the most sing songy track of the album but it comes off well.

12. Compton
Featuring Dr. Dre; Produced by Just Blaze
Listening to this song of out context, it’s just Kendrick beside his mentor Dr. Dre rapping about their birthplace (Which is great on it’s on). When listening to this song in context of the album, it feels like the finale with Kendrick standing strong after almost falling in the trap of Compton but getting past it and still bigging up his city in the end. All this over a booming instrumental by Just Blaze. The story has the a happy ending, the credits are rolling, and that’s the end of good kid, m.A.A.D. city.

Bottom Line:
With only a couple of months left in 2012, let’s get this out of the way: Kendrick Lamar’s good kid, m.A.A.d city is hands down the best album of the year. It’s technically, conceptually, and production-wise head and shoulders above any album released in 2012.

But is it too early to call good kid, m.A.A.d city a classic? Maybe. But when you look at classics from the past, many have gifted rappers giving the world a first person view of their surroundings and showing it’s realities good or bad. Think Nas’s Illmatic or Biggie’s Ready To Die or Snoop’s Doggystyle. This album tells a story that’s layered and well crafted from the lyrical ability of Kendrick to the well placed skits that pushes the tale to the superb sonic background that makes it accessible. All of this pushing good kid, m.A.A.d city to a great level.

With a multifaceted album that truly has something for almost every rap fan, Kendrick Lamar has exceeded expectations on his first major release while also revitalizing his coast and making the whole Hip-Hop culture take notice. King Kendrick has arrived.