Hit-Boy Presents: HS87 – All I’ve Ever Dreamed Of [Review] 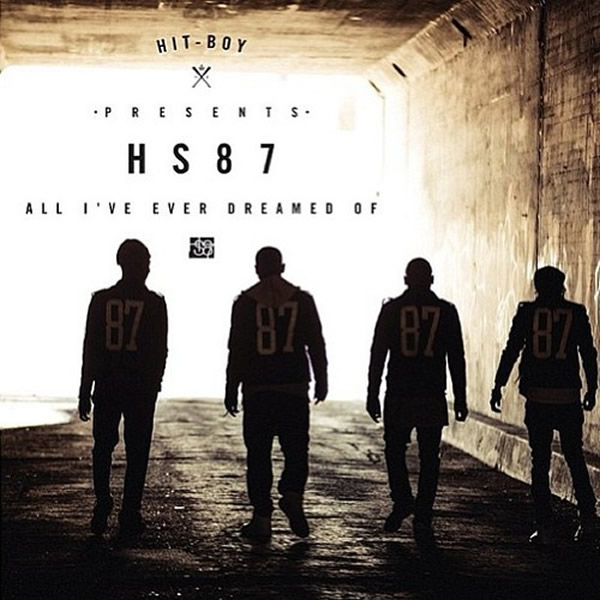 Hit-Boy, the producer most known for The Throne’s hit song, “Niggas In Paris”, had an incredible year, last year, with placements on albums by Justin Bieber, Nicki Minaj, and Kendrick Lamar. His biggest accomplishment was the release of his debut mixtape, HITstory. With that release, he proved that he was more than capable of being behind a microphone in a recording studio instead of being just behind the control boards. In 2013, the Inland Empire, California representer wants to show that he can control a clique of his own instead of being just another player on the G.O.O.D music team. Hits Since 87 (HS87) consists of Hit-Boy, rap duo Audio Push (Oktane & Pricetag) and singer K. Roosevelt with its affiliates Kent M$NEY & B Mac The Queen. With Cruel Summer comparisons because of his close relationship with Mr. West and his own involvement with the project, HB has some expectations to fulfill.

Note: All songs produced by Hit-Boy

1. Them Niggas
Featuring Audio Push & Hit-Boy
The production on here reminds me of C-Murder’s “Down 4 My Niggas” which might be an intentional effort as each verse features bars about how their team is better than everyone else. If you think this is Clique part two then you will be surprised to know that it is not, but it is the first of many reminders of the G.O.O.D music album.

2. You Wouldn’t Believe It
Featuring Audio Push, Hit-Boy, & K. Roosevelt
I think this would have been better as the intro. The production gives a grand entrance feeling as the HS gang plants their flag in the dirt and share details of their life that many would not believe.

3. What A Feeling
Featuring Hit-Boy, Audio Push, & Kent M$NEY
Hit-Boy opens the song by saying what everyone is thinking after listening to this beat for the first fifteen seconds: The music sounds like it is from the 90’s and yes, he produced it. The song talks about the feeling of getting money after coming from humble beginnings. Nothing groundbreaking here, but the song can’t be ignored based on the fact that it does jam. This song will get played in the ride.

4. Enormous
Featuring Hit-Boy, Travi$ Scott, Cocaine 80’s, & Kent M$NEY
The feature list for this song had my interest because I listened to Cocaine 80’s EP, The Flower Of Life, earlier this year and have been listening to it constantly ever since and also I have been wanting to hear some new Travi$ Scott after being impressed with his verse on Cruel Summer’s dark track, “Sin City”. Here, I was very disappointed. This song was boring to me besides Hit-Boy’s verse ending with advice to stay away from bad contracts. This song does not get a SKIP, it just gets a SHRUG. I wouldn’t fast forward through it or hit repeat for this song.

5. Caution
Featuring Hit-Boy & Audio Push
“They are killing them often” this is the only thing they want me to take away from this song. By the 2:20 mark, they kill my interest in this song. SKIP.

6. No Chaser
Featuring K. Roosevelt & Audio Push
I know Jeezy had a line about knocking two chicks down like the Twin Towers, but I’m still surprised to hear Oktane say, “Twin Towers, I’m Bin Laden because I’m gonna knock that down if she got good top and a big bottom”. The production on this is for the over 25 lounge crowd, it’s real smooth like a well mixed drink, fine wine, or good whiskey.

7. T.U.
Featuring Audio Push, Problem, Hit-Boy, & Juicy J
This is the song to play when there is too much alcohol consumption for you to take. “I’m fuck as drunk. Nah, I’m drunk as fuck” is a funny phrase that will be sung loud and proud in any club after 2am. As I write this I am sober, I have to admit that I do not like this song.The mandatory club song for the 21 and over crowd, I’m happy that it is not about molly, it still employs an overused term in contemporary Hip-Hop, “Turn Up!” Of course, Juicy J has to be the star of the song with the most memorable verse.

8. Cypher
Featuring Hit-Boy, Kent M$NEY, Audio Push, B Mac The Queen, ScHoolboy Q, Casey Veggies, Xzibit, Rick Ross, Method Man, Redman, & Raekwon
HS87 meets MMG, Wu-Tang Clan, TDE, PNCINTL, Gillahouse, and the dude from Pimp My Ride and creates a winner. I loved the beat change for Ross’s versse. Xzibit had the best flow, but Method Man’s verse had the best cultural references: Whitney Houston, Bobbi Kristina, Stevie J, and Lil’ Scrappy all fit in his quick appearance while the opening bars of Redman’s verse will appear in the statuses and updates of late 80’s and early 90’s babies: “I’m from the era of Biggie Smalls, TLC ‘Waterfalls'”. ScHoolboy Q, Casey Veggies, and Raekwon each had opening lines that make you believe that they are about to fight for the top spot but they fail to live up to expectations while all the members of HS87 including B Mac, in her only appearance, end up getting outshined on their own track.

9. Fan
Featuring Hit-Boy & 2 Chainz
Hit-Boy’s mixtape had a lot of songs that would get regular play from me. “Fan” was not one of those songs. Here we have one of my least favorites about a Polefessional working wonders in front of HB’s eyes resurrected with a new verse from a G.O.O.D Music affiliate. 2 Chainz’s contribution takes several different routes before mentioning the apple of his eye that has his infatuation. Bad Pun intended: I am not a fan of this song. 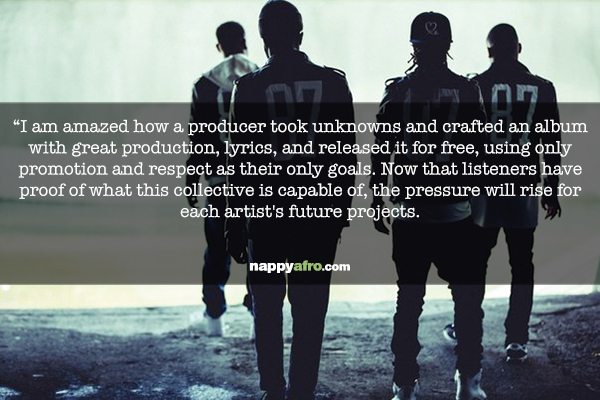 10. Do Me Now
Featuring K. Roosevelt & Hit-Boy
If there was any song that I expected to hear on the radio from this compilation, it would be this song. The production is up-tempo R&B, not techno or house music with singing. I am a fan of musicians that are brash in their lyrics and the fact that there are no delusions in what the song is about or what K. Roosevelt wants when he sings “…have you creaming before we even get into it” make this song a favorite of mine and a bedroom anthem for those with the most confidence.

11. Make Something
Featuring Kent M$NEY, K. Roosevelt, Hit-Boy, & Common
Love the soulful 70’s influence in the production on this tale of life before making something of a bleak situation. Hit-Boy and Kent M$NEY share personal stories of what they did before getting recognition for their music. Another G.O.O.D music affiliate sighting, as Common appears last and represents for all the impoverished youths with his verse. “From Basquiat to Nasty Nas, we paint pictures.” Very inspiring words.

12. Shoebox Money
Featuring Hit-Boy, Audio Push, & Kent M$NEY
Enough of the sentimental and back to the ignorance on the next track. It may seem like a major leap, but those same poor ghetto kids on the last track having a shoebox full of money in search of white girls with black asses is somewhat believable if people told you what you could not do or have; look at every pro athlete ever. Okay, for those that don’t believe, remember that fun and ignorant songs are great if they are done well. This song makes me want to say goodbye to Regions and open an account in my closet. Also, the production at the end is definitely Kanye West influenced.

13. Tonight
Featuring K. Roosevelt
I keep thinking that K. Roosevelt sang this song in the key of Frank Ocean’s “Swim Good”. Maybe I am crazy. Listen to this song and tell me it does not sound like a stripped down and slower version of the song with 80’s techno bass. I can see myself skipping this song on some occasions. Maybe it will grow on me in the future.

14. Only Right
Featuring Audio Push & K. Roosevelt
Just like that, the lone singer of the clique redeems himself by delivering the hook in a harmonizing voice that compliments the song and its mood.

The first verse of the song from Oktane almost did not get played all the way through because I was stuck on the social commentary about today’s families in the first four bars.

I can’t see I need glasses.. of Hennessey. I need passion. We live in a world where it’s easier for a Dad to have a kid than it is for a kid to have a Dad…

…and money makes all these women love you and haters mad/They mad at us because we making moves that they never had,/but that’s hard to care about when you got swag and extra cash. Turning good girls bad,/mama told me about them women because rats like cheese but never actually get it. Mousetrap./I see ya’ll, get on my level or freefall/

…I’m from that left side,/that West side,/that 87HS side/where everyone of the best ride,/now let’s ride because my brother Hit took the throne,/Price took the crown. Late nights, staying up for my niggas that stayed down./Glasses up for the people that I ride with/because the West is back and the IE revived it.

Pricetag’s verse is not to be ignored either as both parts complement each other, but I keep returning to the first two minutes of the song. I still can’t believe that these are the same dudes that made, “Teach Me How To Jerk”.

15. All I’ve Ever Dreamed Of
Featuring Hit-Boy, Audio Push, K. Roosevelt, & Robin Thicke
Points go to Hit-Boy for making a reference to Alan Thicke and Growing Pains on a song with the actor’s son singing the hook. With a choir harmonizing in the background, the HS gang ends their project on a high note paying respect to their past dreams and current realities. And let the church say Amen.

Bottom Line:
This project is the complete opposite of Cruel Summer because it surpassed all expectations. Let me explain before I get outrage for my comment: No one was expecting this project, so the risks were not that high. The G.O.O.D Music album was talked about for nearly a year with details being revealed every few weeks until its release so there were really no surprises. All I Ever Dreamed Of was created under the radar and released onto the world surprisingly. None of the songs were really that out of place and thankfully, none of them ran past the five minute mark. I cannot think of the last time a compilation album from a label was this cohesive and allowed everyone the right amount of airtime that they deserved to shine as individuals and collectively. Hit-Boy is on 12 out of 15 songs as he should be since he is the marquee name that grabs most of the attention. Audio Push appears on ten songs, making listeners, including myself, interested in their future projects, and K. Roosvelt appeares on six songs, which seems unfair, but he did just put out a mixtape.

I am amazed how a producer took unknowns and crafted an album with great production, lyrics, and released it for free, using only promotion and respect as their only goals. Now that listeners have proof of what this collective is capable of, the pressure will rise for each artist’s future projects. I believe they will continue to produce good music and hits as long as Hit-Boy is credited as executive producer.

Download: Hit-Boy Presents: HS87 – All I’ve Ever Dreamed Of [Mixtape]