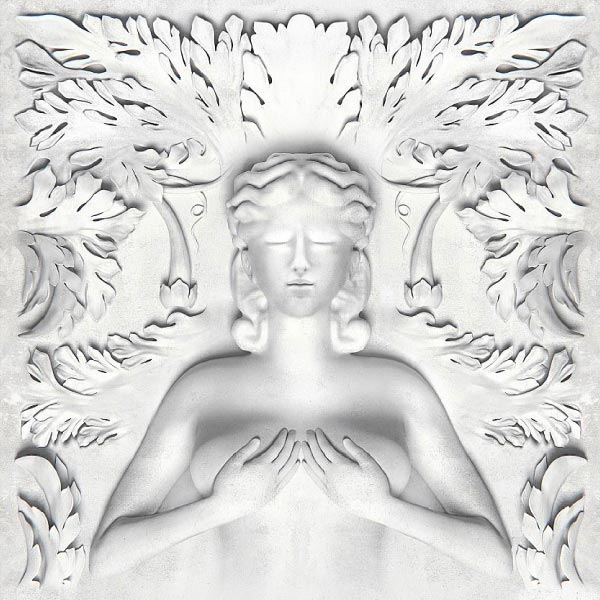 G.O.O.D. Music’s collaboration album, Cruel Summer, was released officially last week and received mixed reviews. The quality of Kanye’s work remains at a high level in 2012 and he’s showing no signs of slowing down. While some may be disappointed with this record, I believe their negative feelings don’t stem from the quality of his work but instead are the result of their familiarity with almost half of the album and the fact that there are only twelve tracks on it. Most of us were expecting the usual 16 or 17 songs and maybe a bonus track or two. With these issues in mind, I’ll review this record as objectively as possible despite the fact that I’ve heard “Mercy” a million times and that Jamaican singer’s voice is giving me a headache.

1. To The World
Featuring Kanye West, R. Kelly, & Teyana Taylor; Produced by Andrew “Pop” Wansel, Kanye West, Hudson Mohawke, Ken Lewis, Mano, Travi$ Scott, & Anthony Kilhoffer
As many of us know, Kanye likes to start his albums with something grand. With the help of R. Kelly, he’s outdone his initial statement from My Beautiful Dark Twisted Fantasy with “To The World.” This is Kanye West’s version of “Fuck the World.” R. Kelly’s lyrics and melody are in line with the imposing character of the song. He sings some of the most memorable lines on the record and the hook is truly empowering, not to mention addictive. His verse starts:

Deuces minus one, middle finger to the sky tonight.
The whole world is a couch. Bitch, I’m Rick James tonight! (I don’t give a fuck)
Throw it up, throw it up, ‘cause you can’t take it with you.
Funny how they wait ‘til you’re gone just to miss you.
To the world, to the world. Then I’m on my Sinatra.
I’m doing it my way. Let’s take it a notch up. (Take it up)

Teyana Taylor finishes the song nicely with vocals in the same direction as West and Kelly. Musically, this is one of the best songs on the record.

2. Clique
Featuring Kanye West, Jay-Z, & Big Sean; Produced by Hit-Boy, Kanye West, Anthony Kilhoffer, & Noah Goldstein
The most melodious song on the album is followed by one of the hardest. The song starts with an ominous tune sung by James Fauntleroy asking a rhetorical question about the morality of “the dollar you murdered for.” Big Sean raps about the unquestionable dominance of his clique on the hook. His verse is audacious and self absorbed as usual. Jay spits his only verse on the record next with even more audacity than Big. He not only mentions his family in the game but also a true cousin who was locked up for almost 12 years but didn’t snitch. He parallels G.O.O.D. Music and Roc-A-Fella as “the Dream Team meets the Supreme Team.” It’s apparent that Kanye set this song up so that the level of audacity would climb with each verse because his is truly the most bold of the song, if not of the record. After bragging about setting records at Louie Vuitton, eating breakfast at Gucci and that his girlfriend is famous simply from “home movies,” he hilariously explains the difference between black and white people.

Yeah, I’m talking business. We talking CIA.
I’m talking George Tenet, I seen him the other day.
He asked me about my Maybach. (I) Think he had the same
Except mine tinted and his might have been rented.
You know white people, get money don’t spend it.
I’d rather buy 80 gold chains and go ig’nant.

3. Mercy
Featuring Kanye West, Big Sean, Pusha T, & 2 Chainz; Produced by Lifted, Mike Dean, Mike Will, Kanye West, & Hudson Mohawke
The most played song on the record comes next. It’s just as tough as the last track but a little stranger. That annoying Jamaican line at the beginning of the song is describing the plight of those being sent to hell. The verses from Big Sean, Pusha T and Kanye are all solid but the aggressive effort from 2 Chainz takes the cake. This is one of the darkest tracks on the album and exemplifies its malevolence.

4. New God Flow
Featuring Kanye West, Pusha T, & Ghostface Killah; Produced by Kanye West, Boogz & Tapez, & Anthony Kilhoffer
Pusha T presents himself as god-like on “New God Flow.” Instead of bragging about money or women, he brags about drug dealing and violence. He takes the first two verses and ‘Ye takes the last. The hook is sampled from “Mighty Healthy” by Ghostface Killah. This song was released as a single a few months ago. It didn’t “wow” me then and still doesn’t. 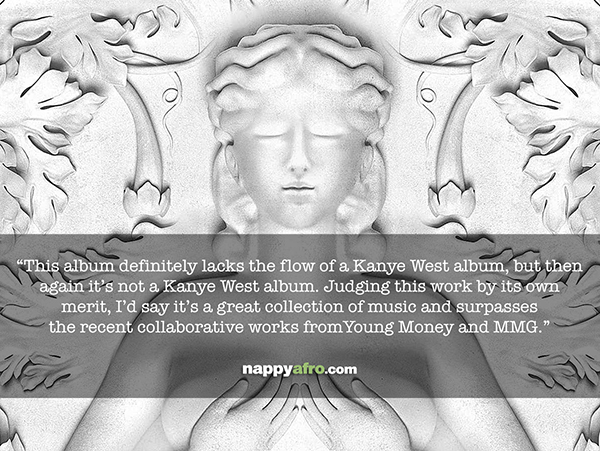 6. Cold
Featuring Kanye and DJ Khaled; Produced by Hit-Boy
As expected, Kanye West created controversy this year with this single, which he originally titled “Theraflu” without permission from the company. Whether he simply forgot to obtain legal rights to use the title or he intentionally used it knowing the consequences is debatable. Apparently the company complained and West changed the title to “Cold.” But that’s not all. He also instigated a response from PETA with his line “Someone tell PETA my mink is dragging on the floor.” Not a bad song.

7. Higher
Featuring The-Dream, Pusha T, Ma$e, & Cocaine 80’s; Produced by Hit-Boy, Kanye West, & Mike Dean
This song and the next definitely push the limits of weirdness on the record. The beat on the verses have a tribal fireside feel. It’s a little to slow paced for my liking. Skip.

8. Sin City
Featuring John Legend, Travi$ Scott, Teyana Taylor, Cyhi Da Prynce, and Malik Yusef; Produced by Tommy Brown, Travi$ Scott
G.O.O.D. Music continues the dark and evil vibe with “Sin City.” It almost feels like a very dark musical because of the underlying story that flows throughout it. It feels like mix between The Warriors and Fear and Loathing in Las Vegas. Travis Scott starts the song describing an anorexic, cocaine addicted female who has given her soul to the City of Sin, presumably Las Vegas. He presents himself with this woman on a drug binge through the night.

Now look what we did now, the cops behind us.
Ran that red light, did you have to be mindless?
SMH We all know that cocaine killed Abel.
From the scholar letters devour this.
She stepped into hell, ‘cause winter got cold.
Don’t look in her eyes, you might see straight to her soul.
Don’t say yes to that good, ‘cause you’ll never know.
‘Cause we’re lost in the city where sin is no biggie.

Teyana Taylor plays the part of Sin City as if she were the evil spirit that holds the sinners in her grasp. She claims that this is where her heart belongs. Immediately after, she and John Legend together sing the part of the female begging for forgiveness and for the demons to be washed away. Malik Yusef acts as the judgmental gatekeeper of the city who later becomes one of the residents of the city.

You are all unwelcome to Sin City
Yet the population still increases its density
And that increases its intensity
Which increases the propensity
To complicate your simplicity
No matter your ethnicity
All for the sake of publicity, in this city

CyHi has the best spots on the song, describing the life in Sin City. It’s in his rhythm. This may be the darkest track on the album and is one of my favorites.

9. The One
Featuring Kanye West, Big Sean, 2 Chainz, & Marsha Ambrosius; Produced by Kanye West, Hudson Mohawke, The Twilite Tone, Anthony Kilhoffer, Mannie Fresh, & Lifted
After the most evil sounding song comes the most peaceful with a beautiful melody. Marsha Ambrosius elegantly sings the hook claiming to be “The One.” Kanye spits first, making the same claim in many different ways.

Big Sean goes second and impresses. He changes up the rhythm and meter midway through to keep things interesting. Unfortunately 2 Chainz wraps it up with a subpar verse. James Fauntleroy ends the song with a nice tune. This is a great song and is one of my favorites.

10. Creepers
Featuring Kid Cudi; Produced by Dan Black
Kid Cudi appears on the record for the first and only time in “Creepers.” I’m not sure why I feel this way about this song specifically but it’s got that Teen Wolf feel that he usually uses. Cudi fans will probably love it but it’s not really my thing.

12. Don’t Like
Featuring Kanye West, Chief Keef, Pusha T, Big Sean, & Jadakiss; Produced by Young Chop, Kanye West, The Twilite Tone, & Noah Goldstein
We all know this song. I feel like Young Chop has really made a name for himself. His grandiose style was bound to impress Kanye West. I’ve heard claims that Kanye ruined the original with this remix and they couldn’t be more wrong. Kanye took an amateur single and brought it up to his level. This is definitely the most gangster song on the album.

Bottom Line:
This album definitely lacks the flow of a Kanye West album, but then again it’s not a Kanye West album. Some of the songs like “Creepers” and “Bliss” seem to be thrown on there from another record and it feels as if ‘Ye didn’t know where to put “I Don’t Like.” Listeners are bound to be disappointed when comparing this work to My Beautiful Dark Twisted Fantasy. Despite the fact that we knew it was a collaboration album, most were anticipating a Kanye West record. Judging this work by its own merit, I’d say it’s a great collection of music and surpasses the recent collaborative works from Young Money and MMG.