Song of the Week: Shaquille O’Neal feat. The Notorious B.I.G. – “You Can’t Stop The Reign” 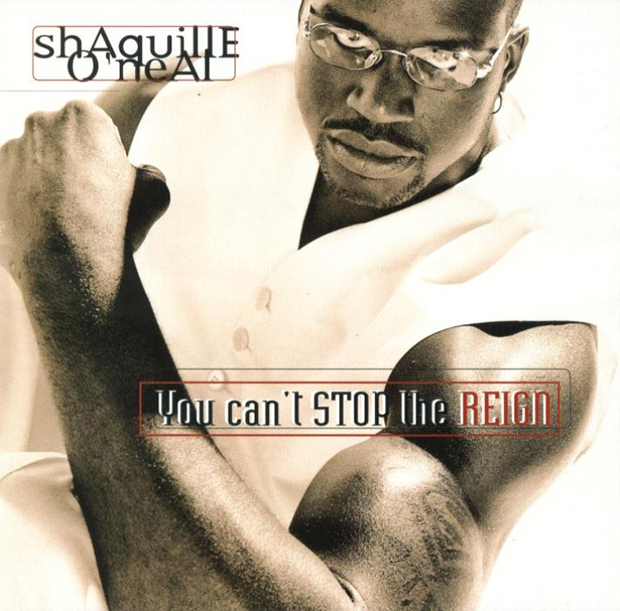 I know you kids out there will be like “WTF? Why He Picked Shaq?”, But people forget that Shaquille O’Neal could actually rap besides that verse he had on his first album saying “I’m extra tallem’s”. Yeah that line was wack but besides that he could spit better than a lot of the rappers now.

Shaq at that time was a new LA Lakers center after leaving Orlando Magics (Kobe Bryant at age 17/18 just started the NBA along with Allen Iverson in 1996).

He had movies already out like the Kazaam which I shake my head for ever watching it back then and he had Blue Chips movie that was out a couple of years before. Steel with Ray J didn’t come out until 1997 though. We can’t forget Shaq already had two albums Shaq Diesel & Shaq Fu: Da Return (Which was gold and platinum with guest features such as ill Al Scratch, Redman, RZA, Method Man, Keith Murray, Warren G, Erick Sermon, Phife Dawn from A Tribe Called Quest, Fu-Schnickens & Def Jef…). He already had his 1994 video game on Sega Genesis & SNES called Shaq Fu which I remember my homie Tony at the time had that game we use to play it back then but I thought it kinda sucked. Shaq also was on the cover of NBA Live 96 which was released on Playstation, SNES, Sega Genesis and Game Boy. He wasn’t the first NBA player to his own video game though I remember Michael Jordan had that Windy City game, Charles Barkley had that Shut Up & Jam and I think Scotti Pippen had a game too. Those were the days though………..

Shaq just released his third album You Can’t Stop The Reign in late 1996 a few months after 2Pac murder and many months after the 1996 bombing at the Atlanta Olympics which I remember like it was yesterday. Floyd Mayweather Jr. fought at the Olympics that year before turning pro later in 96′. Roy Jones Jr was my favorite fighter back then along with Mike Tyson, Riddick Bowe, and Evander Holyfield. I had just got my Playstation that year and I remember I had some Grant Hill Fila’s which a lot of people had including 2Pac in the booklet of All Eyez On Me. First expensive shoes I ever had in my life I knew my mom couldn’t afford it but I wanted to be so cool like the other kids and teenagers who had them then.

Anyway Shaq was signed to Interscope during this release after leaving Jive Records which was the home of Spice 1, ATCQ, Keith Murray, and various other artist at that time. He recruited Mobb Deep, Lord Tariq & Peter Gunz, Jay-Z, Rakim, Sauce Money, Ralph Tresvant, Bobby Brown & The late great Notorious B.I.G..

Notorious B.I.G. laid down one of the best verses I ever heard in Hip-Hop. Maybe I’m reaching but I do feel like the two verses he did was one of the best he rapped and one of the best I ever heard in my life. Biggie fit this track well. Shaq held his own too but Biggie stole the show. I wish Notorious B.I.G. was on the music video and I’m not sure why Big didn’t appear on the video version since he was still alive when the video came out. In 2001, which was 4 years after Notorious B.I.G. death, they used his verse on Michael Jackson Invincible album. Speaking of MJ…. Notorious B.I.G. did bless Michael Jackson with a verse in 1995 on the song “This Time Around” which was a dope verse. Music back then was exciting to me especially when we had legends working with upcoming legends.

Alright guys enough of me going down memory lane. Go ahead and check out this classic cut! R.I.P. Notorious B.I.G.