Rapsody – She Got Game [Review] 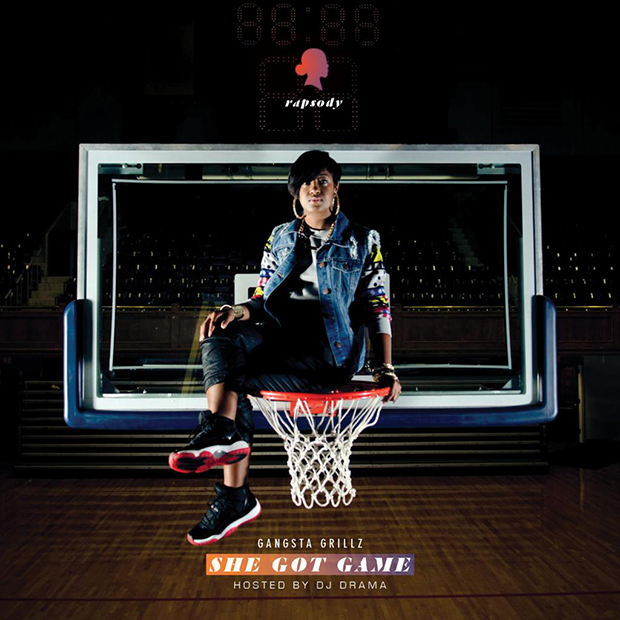 Rapsody is a rapper from North Carolina signed to 9th Wonder’s Jamla Records. She has released critically acclaimed mixtapes and last year, she released her debut album, The Idea of Beautiful, which kept critics and fans expectations high as she yet again produced quality material. This year, she returns to the mixtape scene with a guest. Mr. Gangsta Grillz, DJ Drama “hosts” the She Got Game mixtape. While I have taken issues with DJ Drama and his role on mixtapes,I am a fan of Rapsody and want to see if she continues her streak.

1. A Song About Nothing
Produced by Eric G
The project begins with some words of wisdom from DJ Drama and the North Carolina rhymer details a normal day in her life watching a marathon of Cliff and Claire Huxtable and reminiscing about her days on the court to the day she left the round ball on the court and picked up a mic. It’s interesting how she can rap about nothing but still makes you listen. Maybe, Wale was right, “People don’t love anything so give them nothing”.

2. Coconut Oil
Featuring Raekwon & Mela Machinko; Produced by 9th Wonder
Love the production, but don’t see the purpose of this song. I guess it was just a reason for a Raekwon verse. Mission accomplished.

3. Thank You Very Much
Produced by Khrysis
Everyone had a part in making Rapsody who she is today. To the fans that know her from her appearances on BET and features in The Source magazine to fellow MCs, Mac Miller and the Most Dope Crew and TDE to her parents. She thanks them for their advice and keep her name buzzing. The last line of the song is dedicated to her mentor 9th Wonder.

4. Lonely Thoughts
Featuring Chance The Rapper; Produced by Denaun Porter
They share their thoughts that are usually bottled up inside of them. Rap’s opening verse acknowledges how a bottle of alcohol gets the truth out of her. Chance The Rapper has been buzzing from the reviews of his breakout tape, Acid Rap. The Chicago rapper mentions why he doesn’t sell the mixtape instead of giving it for free and shares everything on his mind.

6. Generation
Featuring Mac Miller & Jared Evan; Produced by 9th Wonder
Mac Miller has a great flow, but could have done better by staying on the subject, Generation Y. Rapsody covers the traits of this generation: lack of segregation, YOLO, distrust in the government/justice system, and chemical dependency. Also, credit goes to Jared Evan singing the inspiring hook about how the generation is meant for something great even if they don’t know it yet.

7. Special Way
Produced by Khrysis
Two verses acknowledging the past way things were done. From her Mom letting her know everyday that she loves her to Rapsody still having love for people that changed on her,

8. Dark Knights
Featuring Wale; Produced by E. Jones
Batman references! Everything about this song works for me. The production alone makes you want to keep this song on repeat, but most importantly are the verses cleverly flipping references to my favorite superhero.

Bane ain’t a match for this emcee
And Dark Knight bat wings need a M3
All y’all drool for Ra’s al Ghul protégé
I’ve been cold as Jay on “3 Kings” [email protected]@a get schooled
I am the, 5’3″ Morgan free-flow genius
Underground killer like Bane whole team is
They couldn’t cop me now they stuck underneath me
I took a leap of faith and I climbed up easy
Rap-so-deezy and Eric Jones, I Gotham City
I save ya all from the bad rappers in ya city
And let you take a couple jewels like the cat lady
Dark Knights rise again Jamla we back baby

I’m a product of Reaganomics where the law is a greater problem
Where the [email protected]@as is spraying something and they got ’em
Word to Robin, that’s Gotham
That was fiction but I’m talking about the district
Where business is booming for bird flippers and morticians
And I understand the plight of Bane
Except we using other drugs just to fight the pain
It’s coming apart, I’m hoping to God you niggas ain’t playing
Cause I’m more Patrick Bateman and y’all Bruce Wayne..
….Fly as fuck, who the fuck is y’all to compare me to them peoples
[email protected]@as questioning they outfit like Jim Carrey on the sequel, get me

9. My Song
Featuring Mela Machinko; Produced by 9th Wonder
“Please Ms. Hill, don’t sue me”. Using Lauryn Hill’s “Ex-Factor” as the backdrop, Rap covers her feelings on missing out on the XXL Freshman cover. “And I ain’t mad about that XXL/I’m bigger than a cover, I want billboard sales”. By the way, she is not the next Lauryn Hill, but when she leaves, we will be talking about how we lost one. Don’t play like that Rapsody, the game needs you. 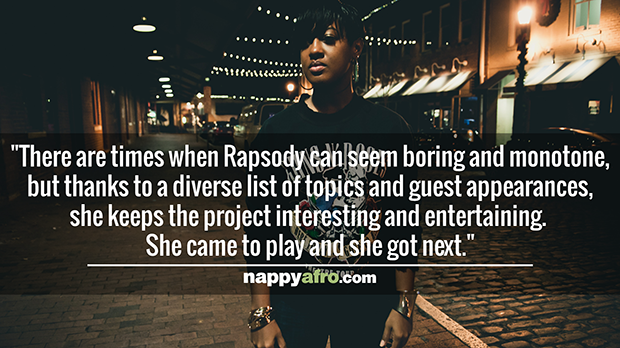 10. Complacent
Featuring Problem; Produced by 9th Wonder
Surprised at how good this verse from Problem is considering the only song I heard from him was “Like Whaaat”.

Where you come from where you judged by how many pounds you sold
Where you come from where you judged by how many hoes you fucked
If I succeed or if I fail in either one I’m fucked in my mind
‘Cus I got daughters and shit
And I’m onto my special month the smarter they get
So they learnin something, shit
But I wonder who’s teachin
Oh my bad, shit I’m done with the preachin
Yall wanna hear about the drugs, the money, sex and the guns
Or how I hate a hater and what I do with my tongue
Or how I’m with the faders and how my squad is the realest
Yall rather play my games than hear about my scrimmage, I dig it..

11. Love After All
Featuring Gwen Bunn; Produced by 9th Wonder
The last song was about finding happiness, on this one, she somehow finds love. Love is hard to find. Even when you don’t think it exists it can be in the most unlikely places.

12. Kingship
Produced by DJ Premier
“Kingship” is weird. I don’t believe that it is a DJ Premier beat. I’ve heard up-tempo production from him, but this is different. Rapsody does some ish talking on here, but I can’t really get with this.

13. Feel Like (Love)
Featuring Common; Produced by Ka
Brown Sugar, Love and Basketball, Love Jones, The Best Man, Boomerang, Purple Rain, even Coming To America gets mentioned as Rapsody compares her love life to love in the movies.This is the song that Common lives on. The soulful production and sample was made for him. Nice touch at the end how he refers to his own acting career in the “Black Romantic Comedy” genre.

14. Never Fail
Produced by Eric G
DJ Drama speaks for what’s seems like the first time in a long time. He wasn’t missed, but he still brought up a good point about how Kendrick Lamar did not bring up any female rappers in his controversial verse. Amazingly, she doesn’t know how to fail or even spell it.

15. Never Know
Featuring Nipsey Hussle, Ab-Soul, & Terrace Martin; Produced by 9th Wonder
Optimism and underestimation is the topic of this song. Great Kevin Ware reference in Rapsody’s verse and Nipsey Hussle details about his come up from South LA’s Slauson Avenue, but the Top Dawg Under Dog, Ab-Soul steals the show:

The mic check 1-2’Annotates turned to checks I deposited
And ain’t nothing wrong with checking into colleges
All in all, know it adds up, staying positive
That’s common sense, like water for chocolate
Riding high with my dawgs, man, y’all tried to top it
I kept the soul in the game, check your pulse
Hit the beat with my flow
I speak what I know, I reap what I sow
Bear the fruits to my labor
Diced pineapples on my rider, I’ll see you later
I’m onto bigger things, I can’t do it mini anymore
Labels say I’m more marketable than a grocery store
Got some dollars on my fix, I ain’t broke anymore
And it seem like don’t nobody know me no more
Somebody said ”Soul, did you sell your soul?”
And I could say yes or no
But you never know.

You ain’t even know It.

16. Jedi Code
Featuring Phonte & Jay Electronica; Produced by 9th Wonder
I like Rapsody’s verse, but Phonte’s line got the biggest reaction from me. After opening the song with his verse, the former Little Brother member lets it be known that he is not to be messed with lyrically:

Before you get reckless with Phontigga
And start slanging epithets
You better off walking through the crowd holding hands with two white bitches at Essence Fest.

WOW. With this song, Mac Miller’s “Suplexes Inside of Complexes and Duplexes” and Big Sean’s “Control”, I’m starting to notice how boring Jay Electronica is on songs. Maybe artists should stop putting his verse last. Rapsody verse is about how she is not copying anyone, she is laying down the foundation for the others, setting the code straight for future Jedis.

Bottom Line:
Very soulful project and the lack of DJ Drama’s voice and “DJing techniques” of yelling and restarting verses makes it even better. I am surprised that there wasn’t a single reference to Spike Lee’s He Got Game on here. Jesus! There are times when Rapsody can seem boring and monotone, but thanks to a diverse list of topics and guest appearances, she keeps the project interesting and entertaining. She came to play and she got next.