The Roots – …And Then You Shoot Your Cousin [Review]

Fresh off their collaborative album with English singer Elvis Costello, Wise Up Ghost from 2013, The Roots are already back with the concept album …And Then You Shoot Your Cousin. MC of the group, Black Thought said this album will be similar to their last one Undun in the sense that it will follow a narrative but this time involving several characters instead of just one. The strange album title and content is a humourless satirical approach to violence in both the Hip-Hop community and American culture overall. Time to get real on this one.

1. Theme From Middle of the Night
Performed by Nina Simone
In true Roots fashion the band keeps fans guessing with the intro track featuring nobody else but the late great Nina Simone thus kicking off the notion the album will follow. Simone’s shadowy vocals preoccupy as well as set the audience down what seems like an ominous road.

2. Never
Featuring Patty Crash; Produced by Mike Jerz, Trapzillas, Richard Nichols, Black Thought, & Questlove
If there’s one thing that this track can prove it’s that The Roots make beautifully dark music that doesn’t self-wallow or come off as preachy but instead just simply tells a story. The beat is made up of chants and some spidery notes that would send shivers down Marilyn Manson’s spine. The concept of the album also begins here with Black Thought introducing one of the many characters in this hopeless story the album is telling. Here we meet a person who is more than down on their luck and is a long-term disbeliever of the system.

4. The Devil
Performed by Mary Lou Williams
For those who know their ancient history this song plays out like a Greek chorus in the sense that it’s a short interlude that features a collective voice warning of the evils that will follow.

5. Black Rock
Featuring Dice Raw; Produced by Karl Jenkins, Richard Nichols, Questlove, & Black Thought
Dice Raw shines on this with his opening line to this showdown of a track with:

Yo what’s for breakfast?/Same as yesterday/Oh that’s right cheeseburger and a 40 ounce/Hey, what’s for dinner? Nothing nigga but last night I had dreams of a porterhouse.

The rattling instruments compliment the lyrics that tell the story of people living a life of ignorance in a place where the blind leading the blind will be a person’s downfall. Think of  “Endangered Species (Tales of the Darkside)” by Ice Cube & Chuck D.

7. Dies Irae
Performed by Michel Chion
Staying with the cinematic tone, experimental French composer Michel Chion steps in for this interlude that would make Yeezus proud. It thrashes, tunes, builds, and screams it’s way into the next song. 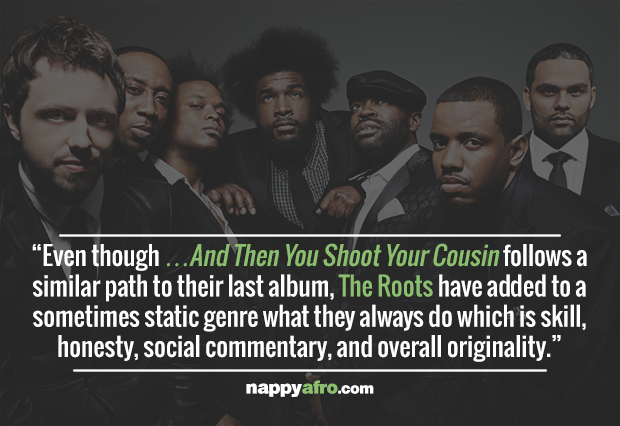 8. The Coming
Featuring Mercedes Martinez; Produced by Richard Nichols, D.D. Jackson, Questlove, Black Thought, & Joseph Simmons
This song forms more of an interlude feel like the previous track as singer Martinez sings over the soft piano keys that transform into the colliding violins and smashed piano playing. A possible audio metaphor for what the characters of this story are experiencing?

10. The Unraveling
Featuring Raheem DeVaughn; Produced by Ray Angry, Richard Nichols, Questlove, Black Thought
A slow build up of the piano is more suggestive of something ominous happening rather than openly saying it. Devaughn’s depressing hook sums up the tail The Roots have been telling throughout the album about the other shoe dropping for this characters who have been living a life of vice in order to get by. Black Thought’s beautifully twisted verse is short in telling the final moments of this man’s life.

11. Tomorrow
Featuring Raheem DeVaughn; Produced by Ray Angry, Richard Nichols, Questlove, & Black Thought
In a complete change of pace we get this surprisingly upbeat gem. There are themes on here we haven’t heard at all during this album. There’s whistling, an upbeat tempo, lyrics of hope and gratitude. At first listen it might seem like this song doesn’t fit into the concept and that’s half true. But after a few spins it becomes clear that the story isn’t ending on a clichéd wrap up where things aren’t so bad after all. It could be seen as a message that there are things to look forward to in life. But pay close attention to the crashing piano keys at the end of the track, this might be an indication of something sinister.

Bottom line:
It’s like the more light-hearted and jocular The Roots are on The Tonight Show Starring Jimmy Fallon the gloomier their music becomes. In the same vein as the group’s last album Undun a story is woven into a cloth that might be hard to look at but is necessary to do so.

The Roots haven’t created an album that takes its characters through an odyssey; they are merely going through their experiences on a world stage. The listeners  are the ones being taken on a journey through the environment and mind of several individuals who are experiencing hell on earth. This anguish is both inflicted on and created by the ones experiencing it.

Not since Mobb Deep’s The Infamous or The Roots’ own Undun has an album bravely delved into themes of the poor and hopeless in such a concept where it’s the driving force of the album. The reason I say it’s brave is because this notion of what Black America is for people is not an easily digested topic so of course radio and TV aren’t going to play this for the masses. But that’s okay as The Roots have always stuck to this method of making music, which is creating art and letting the rest fall into place.

Black Thoughts lyrics are short but dense much like the album with not much hope being shown and that’s the goal here. The intention is to have no “The Seed (2.0)” or “Birthday Girl”. Basically you won’t be playing this one in your ride but you will still be playing it.

The production is spot on with the theme as it will stir emotions in a confronting way. This should be taken as a good thing.

Even though this album follows a similar path to their last one, The Roots have added to a sometimes static genre what they always do which is skill, honesty, social commentary, and overall originality.