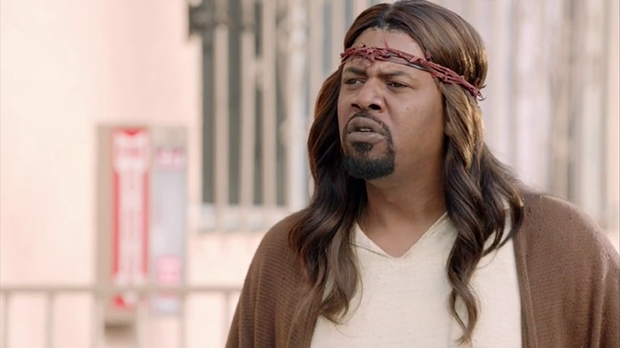 Jesus retuned last night. Well, he returned last night to TV for Adult Swim’s new show Black Jesus. Besides a crazy concept of Jesus living in Compton, smoking weed, help with drug deals, the person behind the show is The Boondocks creator Aaron McGruder (This is actually the show he worked on instead of The Boondocks‘ mediocre 4th season).

So how was the first episode of Black Jesus? Well, to be real, it felt like a web series and a part of me feels it may have been suited better on YouTube instead of TV (Coincidentally, I saw a few actors on the show who got their start on the Internet). Not to say the show didn’t have it’s moments but I’m not sure if the concept will be able to hold an entire series.

Of course people are already protesting a show about a cursing Black Jesus in Compton who can turn water into cognac. And while I personally don’t give a shit on the religious level, I wonder if this show is a commentary on how hypocritical Black christians are or just an unused idea from The Boondocks writing room.

I’m filing Black Jesus under the “wait and see” column. Watch the first episode below and tell us what you think.