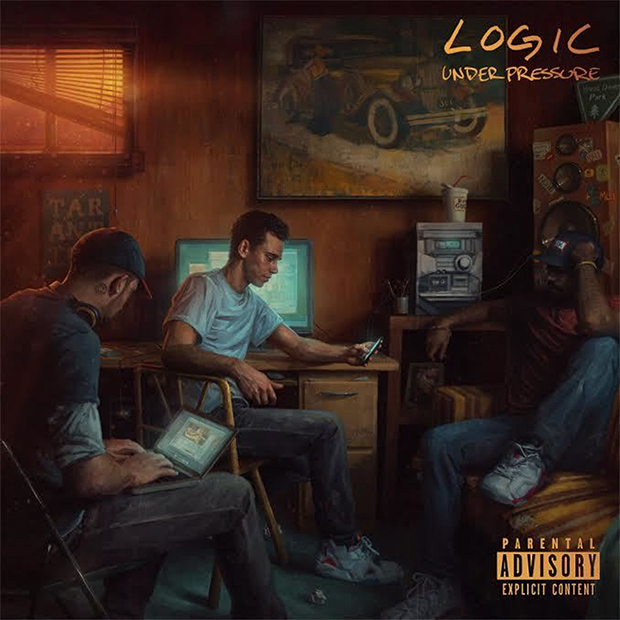 Under Pressure is the debut studio album by American rapper Logic. This is the first project released by Logic under Def Jam Recordings. Is Logic worth all of the hype? Can he make a classic album? You’ll soon find out.

1. Intro
Produced by 6ix
Logic starts his album with a very slow melodic beat. There aren’t many bars that Logic is known for here but nevertheless a great song. “Not define by the sales of my first week”, he repeats this line throughout the song. He really wants his listeners to appreciate it for the music not just for sales. He is super reflective in this song and talks about how he used to wonder what it felt like to be famous. Dope intro to a great album.

2. Soul Food
Produced by Alkebulan, DJ Khalil, & 6ix
Dope. Dope. Dope. I’m gonna say this throughout this entire album review, Logic is dope and the production on this beat is great. If you listen carefully he samples, “The Champ” by The Mohawks, who’s a popular guy to sample from in Hip-Hop, artist from Onyx to Redman and Foxy Brown have sampled from them. Logic does his homework with the beat choice. His lyrics show a young guy who is addressing how people view him now. He is separating himself from his fans who expect song after song from him and trying to get them to appreciate the music.

3. I’m Gone
Produced by 6ix
Another crazy beat from Logic, he samples from Marvin Gaye here. The lyrics in the song don’t make me go too crazy like I normally do when I listen to Logic, but they’re good nonetheless.

I feel like this is the moment, I mean it feel like it don’t it?
Shit girl I know that you want it
But fuck all that
Take the time to get down, stop all that running around
I’m feeling you feeling me, know that you into me
Baby girl let me get down, cause my mind gone
That’s the type of shit that I’m on

No song on this album is skippable, the sequencing is something I really applaud him for. You don’t normally see an artist on their debut album be able to show the ability to really get the sequencing down track after track.

4. Gang Related
Produced by 6ix
My favorite song on this album so far. The beat is so dope. Logic shows his great storytelling ability in this song. The first part of the song is from his perspective as a young child seeing his brother and friends sell drugs, the poverty in his home, his mom doing drugs and his dad leaving. The second part of the song is from his older brothers perspective. He talks about not wanting his younger brother (Logic) to see all of the wrongs he is doing but he is also realizing why he is doing it. Logic’s great storytelling ability is similar to Nas or Big L. He is able to paint a picture of what his childhood was like so clearly you feel like you’re there. You really feel his emotion through the track which is a characteristic of many great rappers. The beat hits so hard at the beginning of this track you can tell it’s gonna be a dope song.

5. Buried Alive
Produced by Dun Deal & Logic
This is self produced track by Logic on the album. The beat is cool and a lighter sound than the previous song, “Gang Related”, but still dope. He talks about how he feels buried from the fame that he has gained. Some standout lines here:

The deep contemplation that Logic shows on this track is impressive because you can tell he’s not just an artist worried about the money . He is really here for the longevity and to be a good artist. 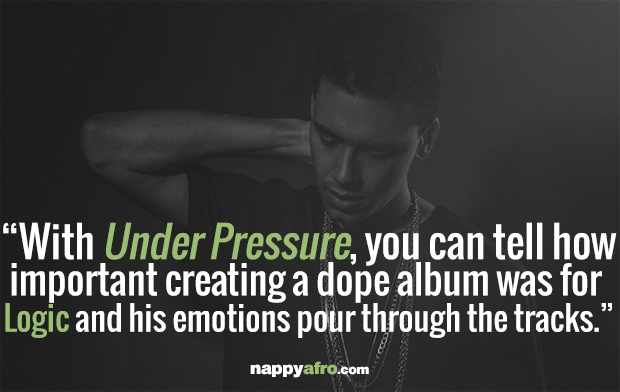 6. Bounce
Produced by S1 & M-Phazes
This track right here to me, is one of the few songs on this album that can be considered a modern day banger. Most of this album is a 90’s sounding album to me. That label gets thrown around so much that it may have lost some credibility but it really is a 90’s sounding album. Logic uses this song to address all of his new fames who are just now getting onto his music. He says “We been at it way before the fame ho” reminding people that he’s been grinding for a LONG time now.

While he addresses the new fans and embraces them of course he wants to remind people this isn’t by accident. The success of this album is because he’s been putting in work for a long time now. The other part of this song is Logic’s flow towards the end of the song. When we rappers who spit so quickly like Logic does it can almost overwhelm you especially when they do it on a song on an album. What Logic show’s here is the ability to not overpower his listeners with his flow but rather have it just go with the song and add to the greatness of the song. We see this with Eminem in “Rap God” when he goes off, he is still able to not overpower listeners. Great Job Logic.

7. Growing Pains III
Produced by Tae Beast, Skhye Hutch, & 6ix
In this song, Logic takes us back to his childhood where he tells us how he was surrounded by so much violence and how he dealt with it. He mentions the Nikki character who is a recurring thing on the album, (Just wait, it’s dope). Using creative rhyme schemes we see Logics versability and also his storytelling ability. Again another dope song that shows Logic great talent with creating dope songs with great concepts.

8. Never Enough
Produced by DJ Dahi
This is the only possible small small chance of being a skippable song. Only because it doesn’t really fit the concept of the album. To me it’s random and kind of forced. BUT like all of the songs on this album the beat is sick. This is another song produced by Logic, and he shows a lot of talent here. Very much like J. Cole who is heavy in producing his own music, Logic shows the ability to really create a beat and concept of a song and truly execute. But the placing of this song to me is off. It’s dope how he interpolates “So Fresh, So Clean” by Outkast here.

9. Metropolis
Produced by Rob Knox & Logic
Straight 90’s and soulful here. Logic again references to how his career began and how he started in small ventures and people barely listening to him but always feeling like he was the best. This beat again produced by Logic is so soulful, he samples Kendrick Lamar and Bill Withers, who we also see a sample from later on in the album.

10. Nikki
Produced by Logic & 6ix
Finally ! We see who the hell Nikki is that he references throughout the entire album. Obviously although he is talking about cigarettes he uses this song to talk about what he used to do while smoking and why it brings back so many memories for him. He uses it to build off the thought of growing up and becoming a man. Dope song, it’s cool to see Logic use the cigarettes to show a metaphor and transition to becoming a man.

11. Under Pressure
Produced by Logic
Logic uses this song (Which is 9 minutes long) to address his family who feels like he has been distant to. It’s cool to see how he is able to use the sound bits from his brother and dad to show how all of the things he talks about is factual and it is true emotions he is dealing with. To me it made me feel like I was there to experience everything with him. Logic does a great job again with storytelling on this album and its really dope to see.

12. Till The End
Produced by S1 & M-Phazes
One of the dopest outro’s I’ve heard in a long time. Logic truly cares for the structure of an entire album not just a couple songs. You can tell this album was carefully planned from start to finish, He talks about how grateful he is to have all of the success that he has now and how much he has grown.

Bottom Line:
Logic is dope. His versatility and talent is on display throughout this entire album. You can tell how important creating a dope album was for him and his emotions pour through his tracks. He is easily one of the top lyricist and emcees out here today and with this album he has pushed himself to that discussion of best rappers of his generation in my opinion. This album will be forever remembered throughout his career.