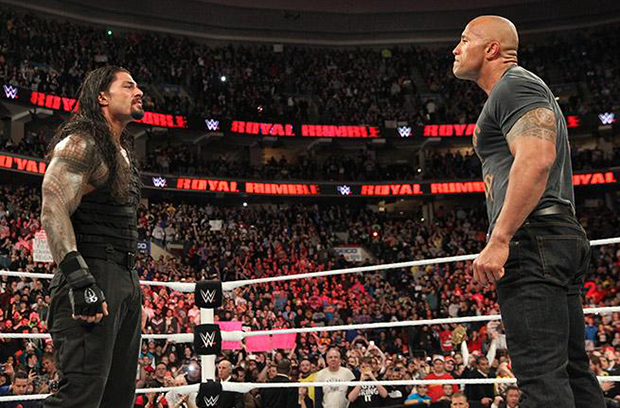 I know. You thought Daniel Bryan might win the Royal Rumble match and go on to face Brock Lesnar at Wrestlemania 31. Or maybe Dolph Ziggler might win. Or even Bray Wyatt. But come on, you knew deep down in your heart months ago that Roman Reigns would win this match. Well, Reigns in fact did win the Rumble on Sunday night and the Philly crowd hated it. A lot. WWE tired to be slick and have him stand next to his cousin The Rock and they still booed like crazy. That makes two years in a row that fans hated the winner of the Royal Rumble match.

Besides that, we also got some surprises in the Rumble:

The highlight of the night was the Triple Threat Match for the WWE World Heavyweight Championship. All the participants did their thing, but Seth Rollins wrestled the fuck out of that match. He jumped through tables, pulled out a phoenix splash, was curb stomping everything in sight. John Cena was John Cena but he served a purpose too. At one point Brock Lesnar was getting carried out on a stretcher, only to come back and win the match by pinning Rollins.

Speaking of Rollins, here’s the GIF of the Night:

Now that I think about it, Brock getting put on a stretcher and still winning is some face shit. Something I would expect Cena to do. Wait, could Brock Lesnar be turing into a face? Does that mean Roman Reigns could be heel by Wrestlemania 31? Options.