Jamie Foxx – Hollywood: A Story of a Dozen Roses [Review] 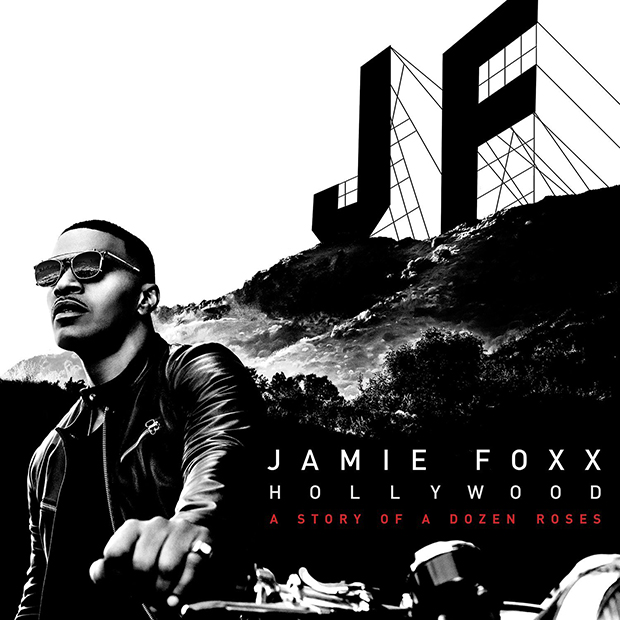 I think we’ve discussed this somewhere in the 8+ years that I’ve been writing for nappyafro.com; I’m a fan of Jamie Foxx. Dope stand-ups, great show, awesome radio show (for a while), some good (and bad) movies and even his music. I will say the comedy is the most consistent quality of anything he does. Nobody has amazing movies each time they hit the screen so that would probably be his second strongest offering, and then there’s his music. The talent is NEVER an issue vocally (folks who were at the Mayweather/Pacquiao fight say it sounded fine there, but we got something different on TV, I get it). The choices he makes musically leave me scratching my head. For the most part, you can get a decent feel for where Foxx is in his life with his albums. You can usually tell if he’s been partying more or chillin’ with someone(s) special. When you go 5 years from one musical project to the other, that’s a lot of living to try and nail down on an album however he doesn’t break his 15 track formula.

Per usual, when doing these FFWD reviews, I’m going to tell you what songs I thought were bad enough to talk about. I can’t express how much I hate “Tease” produced by Pharrell. I knew it was him as soon as the track started, and not in a good way. It felt like several other songs we’ve heard before and it was in sharp contrast to the way the album was going up until that point. This is a SKIP song for me. It’s a sign that only 4 songs in, Foxx still has the same conflict which I’ll discuss later. The very next song is “Baby’s In Love” featuring Kid Ink which sounds more appropriately placed on Foxx’s Peep This album, released in 1994. I will admit that it’s a catchy beat that the grown folks clubs will be playing all night I’m sure. This is definitely two-step approved but this placement on the album (as in being on this album and where it is on the album) doesn’t feel right at all. The song right after that is “Text Message.” Now, this is something that we’re going to have to deal with, the artists inclusion of technology in songs. With sexting, snapchat, Glide, etc. it’s a part of the process nowadays in the game. I have rarely heard the lyrical component of these songs work as easy as asking for a lewd pic on social media. The bridge and chorus is, “Started with a text message/ended with sex guesses/true, I wanna be on you/(x2) L.O.L., Smileyface, the emoji with the tongue out/now I’m kissin’ you, touchin’ you, freakin’ you over at’cho house.” While this may in fact be the way it goes, singing it has got to feel like when a woman gets asked for areola pics all the time. It’s clumsy, feels like a parody, and inspires the question, “Is he serious right now?” The next SKIP track is “Vegas Confessions.” Color me lazy but I have no insight to add to this. The bass bumps, but the rest of the song sucks. I erased it immediately from my copy.

One of the lead singles from this album is “You Changed Me” featuring Chris Brown. It’s a good song that grew on me, but it does sound/feel like a Chris Brown song that Jamie took. This isn’t a real problem because Breezy makes good songs too…but he’s also almost 50 so hearing him sing “Fuck them other girls” sounds wrong. I’d probably prefer the radio version but the song is pretty cool. The one song that I don’t want to like because of it’s brash and corny personality is “Right Now.” Nothing like having the chorus “She wanna fuck right now” blasting out the speakers as you ride past a car of kids. I can’t even imagine this song coming on if you’re chilling with a woman…like, is she gonna immediately cop an attitude like “Uh uh….no, I don’t. You got me fucked up is the only effin’ goin’ on in here…”. I can’t deny the arrangement on this one though. The haunting chords, simple snap, hard hitting bassline and fun melody playing combine to give this a bit of a sultry, dark edge. Also, having being followed by “Pretty Thing” makes an amazing combo on the album. “Pretty Thing” is Foxx’s remake/omaje to “PYT” by Michael Jackson…a very ambitious attempt. I think he hit this one out of the park. Sonically it has that “hey hey clap” working for it so the bounce is in full effect. DJ Mustard gave this song some amazing vocal arrangement and the bassline is too funky to ignore. This is easily one of my favorite songs on the album (too bad both of these are bonus tracks).

Bottom Line:
As I’ve expressed before, I’m a fan of Foxx. I have every CD and rank him pretty high in my list of best voices ever. Even though I listened to his radio show, tend to catch his interviews and such, I won’t go as far as to say I know this dude, but it’s pretty apparent he’s having a good time in Hollywood. That good time consists of his choice of women, his selection of parties, his choice of drinks, and pretty much that playboy lifestyle. There isn’t a problem with that, but when you’re 47 and can sing with the likes of Brian McKnight, why are you giving us songs that should and could be sung by guys half your age? Why aren’t we getting more “Anytime” and less “Show You How Your P*ssy Works.” This doesn’t mean they have to be a bunch of ballads or two-step inspired tracks, but there is a way to be mature, not old and fun loving without being crass, mannish and young. I can’t fault him too much for that, if you listen to all of his albums, there’s this same struggle.

Trying to find/ride the line of being talented and musically diverse but watering it all down for mass consumption over bass and bounce instead of lyrical depth and sincerity. The tough choice of showing his maturity and what he’s learned while still letting us know that he’s still having a good time and conquering as many things/women as he’d like. While that may work in a movie where you can use scenes, transitions, settings to tell a story, on an album, the shift from the bedroom to the club isn’t always well choreographed…and sometimes, you trip. There are a bit too many drunken trips to the dancefloor, drunk dials, and sloppy make out sessions on this album. Foxx definitely went out and grabbed some of the better producers to work on this album…but I think if he would have cut that down a bit, he’d have a much more cohesive and well produced album. While this album may be titled Hollywood: A Story of a Dozen Roses, I’m left wondering if this is just him telling us again that this is The Best Night of My Life as he gives us some Unpredictable arrangement. As we Peep This offering, I really wish that he’d have better Intuition when it comes to what songs make the album or at least how they are arranged. As it stands, right now, who’s gonna clean up all these damn flowers.