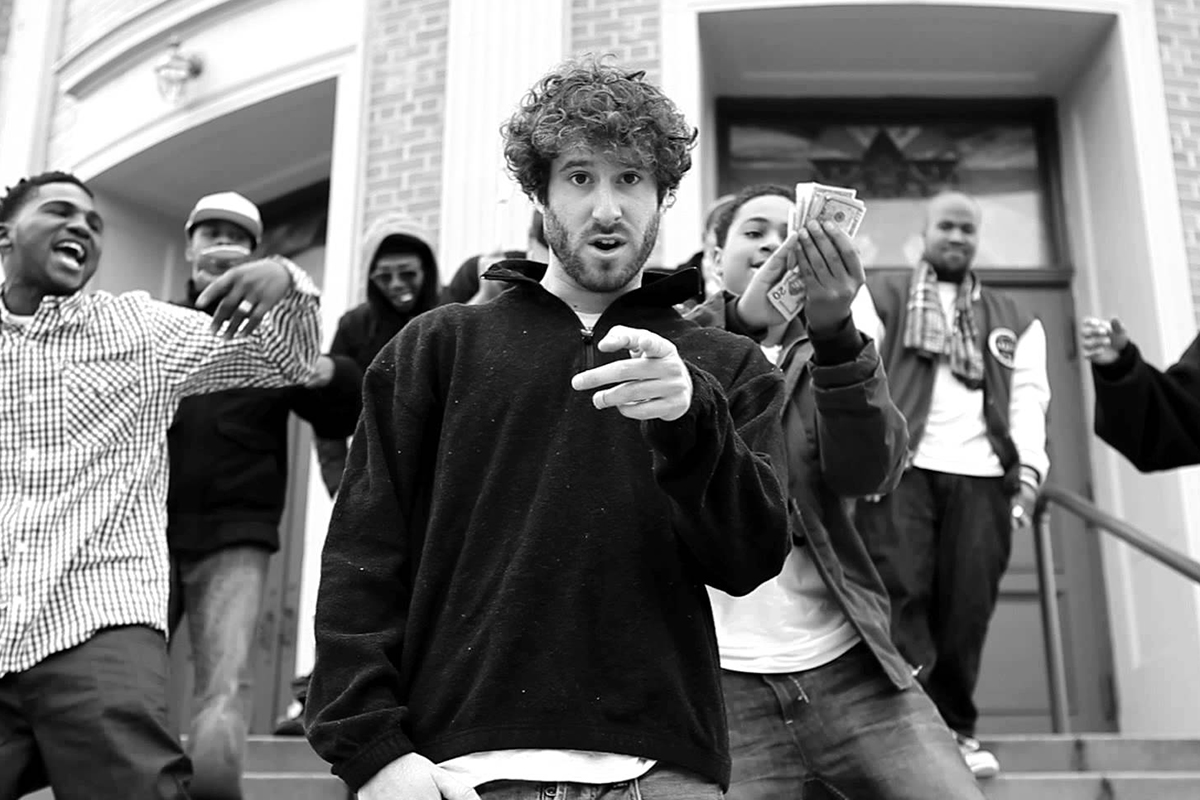 YouTube has managed to become a platform for career making videos. Some have turned out to be one-trick ponies while others have capitalised off it nicely by proving they have more to say than just a one off viral video hit. Much like SNL alumni Lonely Island, rapper Lil’ Dicky has achieved fame by releasing a catalogue of rap songs that don’t parody or condescend Hip-Hop culture but instead embraces it, while still getting in one or two dick jokes. His start began with the music video “Ex-Boyfriend” in 2013, a song about dealing with a girl who’s ex has bigger dick than himself. Since then Dicky has managed to gain a solid fan base with his off color songs that walk the line between funny and dope. Lil’ Dicky a.k.a. LD has produced songs that make fun of white dude culture while sounding super professional at the same time. Now after a successful Kickstarter campaign, the rapper known as Lil’ Dicky has created a fully-fledged debut rap album. From interviews with the likes of Sway and Peter Rosenberg, the comedian rapper has stated that he wants to make songs that self-deprecate but also solidify him as a legitimate rapper. Time to find out how he goes.

1. Meet the Burds (Interlude)
The album starts off with a (possibly scripted) phone conversation between Dicky and his parents. They are very much like the parents from Meet the Fockers if they had an aspiring rapper for a son.

2. Professional Rapper
Featuring Snoop Dogg
The opening track is a back and forth between Dicky and the legendary Snoop Dogg which plays like a job interview. This track could have easily been a cheesy take on race in rap but it’s actually surprisingly insightful. Dicky states his argument that he’s a certified rapper to Snoop by showcasing his knowledge of the game and his impressive flow saying that there is room in rap for a guy like him.

3. Who Knew
Dicky rides a spaced out beat while putting his Hip-Hop flag into the ground and claims to be the “rap game Walter White”. The song’s title is quite appropriate because who would have known this guy, who made songs about jerking off to the Lion King, could actually spit a verse and put together a catchy chorus.

4. Lemme Freak
Fans of LD will already be familiar with this song. Released last year with a hilarious video that visually narrates this new take on picking up girls at the club. Granted that the song isn’t as funny without the video, there’s enough harmonizing in the chorus to make this a banger. Lil’ Dicky proves his storytelling ability as he spins this tale of trying to get laid.

5. Lemme Freak For Real Tho (Outro)
In a fashion that rings true for the Kanyes of the world, Dicky dedicates a whole four-minute track as an outro to the previous song and it bangs pretty hard. It’s too funny hearing a track that’s overloaded with Auto-Tune about a guy who can’t get laid. Dicky proves himself to be the everyday person’s rapper.

6. White Crime
Like most of the tracks off this album, if you don’t pay close attention they just sound like a run of the mill rap song. But once you get past the dark brooding beat of “White Crime” and listen carefully to Dicky’s whispered verses, you’ll notice he’s talking about his own version of doing dirt. Such evils include sneaking into movies without paying and using WiFi without permission.

7. Molly
Featuring Brendon Urie of Panic at the Disco
Wait… did this album suddenly get serious? Holy shit it did. Who would have thought a guy called Lil’ Dicky could make a self-reflective song about going through a breakup sound so good? Damn, if you’re prone to calling your ex after listening to one Drake song then approach this track with caution. Another surprise is how Brendon Urie crushes the chorus. This album just reached impressive depths.

8. Bruh…
With no chorus and just 4 minutes of bars this song will produce some screw faces… but in a good way. Try listening to this myriad of flows without contorting your face the way true rap fans do when they hear something great. Though there’s humor in the lyrics it’s obvious that LD is no joke. He destroys this song with his lyrical onslaught. Bruh indeed.

9. Hannibal Interlude
Featuring Hannibal Buress
If there’s one comedian who can accurately pick apart rap music it is definitely Hannibal Buress. His jabs at Hip-Hop clichés like having 30 deep entourages on stage while performing or over indulging with purchasing jewelry are comedy gold. A nice break near the halfway mark of the album.

10. Save Dat Money
Featuring Fetty Wap & Rich Homie Quan
One surprising attribute that Dicky has, besides his ability to flow, is his aptitude to collaborate with big names. Fetty Wap kills the chorus of this ‘how to save’ manual. This song dips its toes back into the comedy pool with Dicky explaining how he saves money alongside two rappers who usually brag about lots of ways to waste it. The knockoff DJ Mustard beat adds to how hilariously dope this all is.

11. Oh Well
Featuring Jace of Two-9
It’s back to the semi serious issues as Dicky and Jace take a look at the world’s obsession with social media and whatever appears on a tiny screen. The lo-fi beat creates enough room for the lyrics to take control. Unfortunately anyone under 45 can relate to this song about modern world distractions and missed opportunities.

12. Personality
Featuring T Pain
A thin line between the ridiculous and sincere is drawn with this song. It’s funny to hear T Pain sing “We getting pussy with our personality” in a robot voice too. Basically Lil’ Dicky is spitting game to the opposite sex about how nice he is. Like literally how nice he is. The production is reminiscent of a 90’s beat mixed in with Auto-Tune. T-Pain’s spoken word outro might be the best thing ever too.

13. Pillow Talking
Featuring Brain
Ever heard a rapper feature a verse from his own brain? Well I just did and it’s glorious. Lil’ Dicky shows off his creative side by penning a 10 minute long track about having a post-coital conversation with a less than impressive one night stand. This song gets an A+ for originality but it doesn’t have much replay value, especially due to its length.

14. Parental Advisory (Interlude)
Dicky’s amazingly hilarious parents return for another concerned phone call to their up and coming rapper son. If these conversations are real then this guy needs to feature his parents on every album.

15. Classic Male Pregame
Dicky tells a very literal story about him and his squad getting ready to head out for some drinking and women chasing. The beat goes hard along with the ballad styled chorus while Dicky explains in great detail about the preparations it takes to leave the house. The video made for this is more enjoyable to watch while following the lyrics but the song does stand strong by itself.

16. The Antagonist
We’re taken towards a new direction with this song as LD spits extra hard over an equally remorseless beat. Believe it or not this guy has some knowledge to drop, especially about his position in the rap game. This guy is surprisingly competitive with simple lines like “It’s absurd but I’m looking ’round and ain’t nobody verse me”. Basically this guy comes out swinging on this track.

17. The Antagonist II
In part two things are slowed right down in regards to the beat and lyrical delivery. It’s hard to admit but a few of these songs (this one included) are built around substantial and meaningful things like self-identity and dealing with thoughts of doubt. Powerful stuff coming from a guy called Lil’ Dicky.

18. Parents Still Don’t Understand (Interlude)
Yes! The parents are back and even funnier than the last skits. Here they offer help with finding the best place to source strippers from for their son’s upcoming performance. These peppered interludes are just the thing.

19. Work (Paid for That?)
Dicky pens the realistic version of the ‘we made it’ song. No mention of buying a house for moms or paying off a buddy’s debt or other cliches. Here he goes into detail over some upbeat production about how getting paid to rap means you can quit your office job and sign titties for a living. Something to aspire to for the rest of us.

20. Truman
The final track has Dicky drawing comparisons between his career and the movie The Truman Show, a film about a quirky man who unknowingly is America’s number one source of entertainment. LD has made it clear that though he likes to have fun on the mic he still takes it seriously and wants to be seen as the real deal. It must be a frustrating position to be in because he vents all of this on the outro. Staying true to his Kanye inspiration, Lil’ Dicky talks for a solid 5 minutes as the track fades out. Hilarious, arrogant, and entertaining.

Lil Dicky’s attempt at being seen as a genuine rapper with a sense of humor is noble. Songs like “Truman”, “The Antagonist”, and “Molly” prove that he has way more to talk about than just getting high and jerking off (though these issues are still touched on). Even “Pillow Talking” walks the line between comedy and introspective thought. The production is top notch and the guest list is impressive (Snoop Dogg, Fetty Wap, Rich Homie Quan) as is LD’s ability to switch flows without batting an eyelid. The serious songs prove that he’s more than just a one-man Lonely Island while the funnier tracks show that he also doesn’t take himself too seriously. Some tracks are skippable and long but all deserved to be listened to at least once.

It’s impossible to place Lil’ Dicky in a category since he is kind of inventing it as he goes along. He makes funny Hip-Hop songs that aren’t a complete parody of Black culture while at the same time creates existential tracks that actually mean something. It’s also clear this guy is talented with an ability to switch flows, pen detailed songs, and display crazy wordplay. On paper these are all qualities of a good rapper. At this time there’s not much point trying to pigeon hole this guy, mainly because he won’t give us the chance. This will sound strange but Professional Rapper is a solid debut with a diverse production and LD needs to be given credit for that.