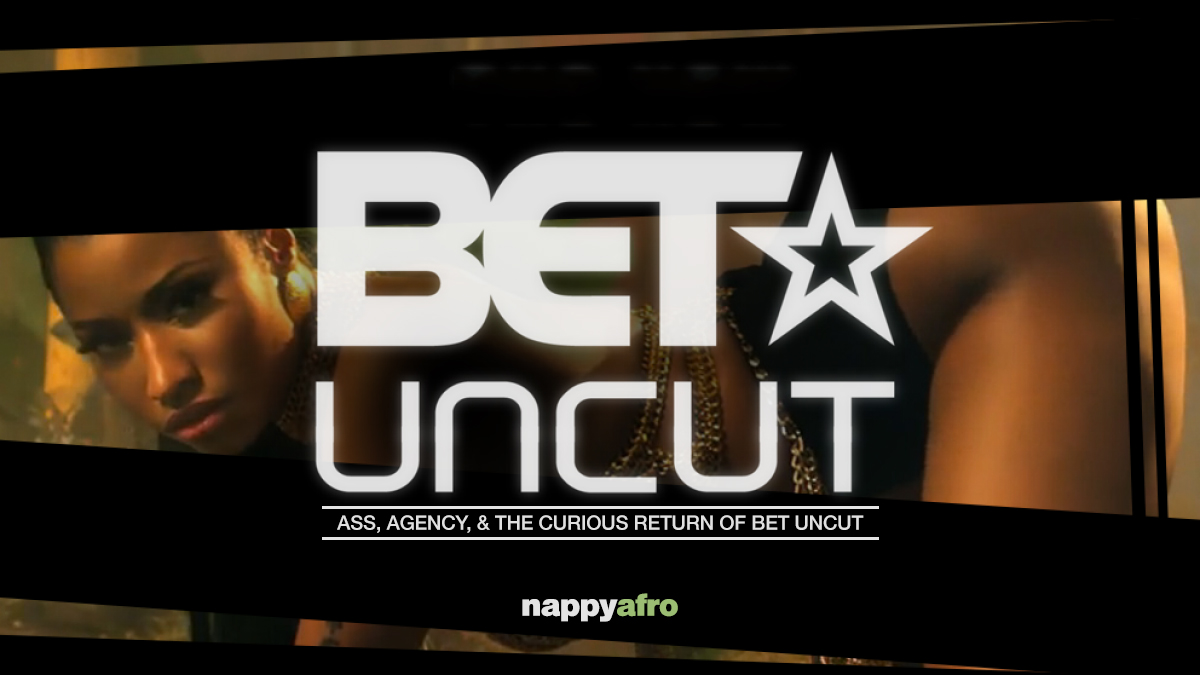 If you happen to peruse Black Twitter, you may have seen rumors spreading that the infamous, or infamASS BET Uncut was set to return to TV. While it seemed absurd, most men with fond memories of teenage years fighting to stay awake until 3am to see near naked women dance in low budget videos next to no name rappers couldn’t help but to rejoice, or at least have their interest piqued.

Well, it appears that those rumors could be true, as BET has been running commercials for the show, set to appear tonight at 11pm. Why BET would bring the show back is something of a mystery, as I’m not sure people missed it in the way that the ads would have you to believe. While I’m sure there are a few people who, like me, find themselves randomly humming the harmony of Black Jesus’ “What That Thang Smell Like?” for kicks and giggles, I don’t think we’d really count that as sincere yearning.

Reaction has unsurprisingly been mixed; as some are always down for some good ol’ T&A, while others see this as the much maligned network exploiting the culture and promoting the misogynistic portrayal of women, particularly women of color. However, in 2015 the issue isn’t as black and white as the bikinis and lingerie that the dancers wear in the videos.

For starters, society has finally started to peal away the respectability notions of chastity and ‘proper’ behavior of what makes a ‘good woman’. As archaic as it is, we are just now coming to realize that women not only like their bodies, but don’t mind showing them off. That not all of the models that appear in magazines, websites, and videos are dumb, naive sheep being manipulated to show off their assets. The idea that women can like sex, and like it just as nasty as their male counterparts are causing more shock than Clayton Bigsby unveiling himself at a KKK rally. No longer are women settling for the idea that their worth is connected to how demure they are when it comes to doing the do; and are seeking liberation from the shackling notions of what makes women undeserving of respect because they like to twerk and have PornHub in the favorites section of their web browsers. I don’t now about your social media timelines, but many of my female Twitter followers were just as excited and curious about Uncut coming back as my male followers.

Black women especially have been at the forefront of challenging societal standards of sexual normalcy, partially because they get it twice as bad as their fairer sisters. They are no longer accepting the label of ‘hoe’ for embracing the sexual bravado of Nicki Minaj and the newly sexually uninhibited Beyoncé, and are demanding that those images be just as respected as the Lauryn Hill archetype, often used to disenfranchise women who don’t appear to fit into what is perceived to be acceptable behavior.

Yet for all the positive steps taken to basically grant women the same range of human emotions and the liberty to act on them without judgment (you know, which we grant to men without question), the road to equality is still filled with speed bumps.

Patriarchy is still the order of the day, and women bare the brunt of it all the time. We still pay them less even though they are outpacing men in educational attainment. Jobs continue to operate as old boy’s clubs that are still reluctant to hire women for top positions, even when their resumes are more impressive than their male counterparts. Speaking of the workplace, the U.S. is the only advanced country in the world that doesn’t automatically guarantee paid maternity leave.

What may be even more of a detriment to woman advancement, more-so than structural and institutional policy, may be the male ego. Statistically, it’s really messed up for the sistas out in these testosterone heavy streets. Figures such as 3 women being murdered every day by a current or former male partner, 70% of women experiencing some form of sexual or physical violence in their lifetime, and that nearly 39 million women in US have at some point face violence from their male partners are both mind boggling and heartbreaking. There is still the notion that women are trophies at best and property at worst. Women that don’t fit into a pristine, virginal image (trophy) or who don’t act and respond the way men want them to (property) are often met with shame, ridicule and all to often violence.

Now clearly rap music cannot be held solely responsible for women’s oppression, as patriarchy far out dates “OPP”. Yet as a male dominated industry it still finds itself struggling to deal with the same issues that the rest of society does as we discuss gender equality. It can be argued that some of those issues are found in programming such as BET Uncut.

Even if you don’t want to break your brain with tussling over morality and equality and you’re just excited about seeing some near-naked booty bouncing, you have to find it pretty odd. As a cis-gendered, heterosexual male who was in full on puberty mode during Uncut‘s heyday (I was a sophomore in high school finding backdoors to school firewalls, sneaking to watch “Tip Drill”), I was thankful for the chance to see near naked tig ol’ bitties. Part of that though was I didn’t have many options. We had an on again, off again relationship with premium cable at my house, so I didn’t always have Zane’s Chronicles or HBO’s Real Sex to fulfill my fix. The other alternative? Hoping that the scrambled Playboy and Hustler channels hit that sweet spot were you could make out maybe 49% of the picture. Now, straight up porn is only a swipe away on our smart phones, and ass shaking is almost as integral to social media as hash tags. Who needs to wait around for Uncut to come on? Speaking of waiting, they moved it all the way up to 11pm. How much booty can you show me on network television at 11pm?

Who knows how much of an impact BET will make with the return of Uncut? Who knows that this isn’t some big prank to sucker in folks looking for some nudity and actually give them the revolution, finally televised? Or when you tune in it’s just that ‘deez nuts’ guy from Vine? Who knows. While I don’t know if you could ever call Uncut progressive, it’d be nice if we could start breaking down the taboos of sex, which contribute to a lot of the negative notions and double standards we place of the double x chromosome crowd. Nothing wrong with enjoying some T&A, but that enjoyment has to at some point also include respect and non-judgment for the rest of the body.