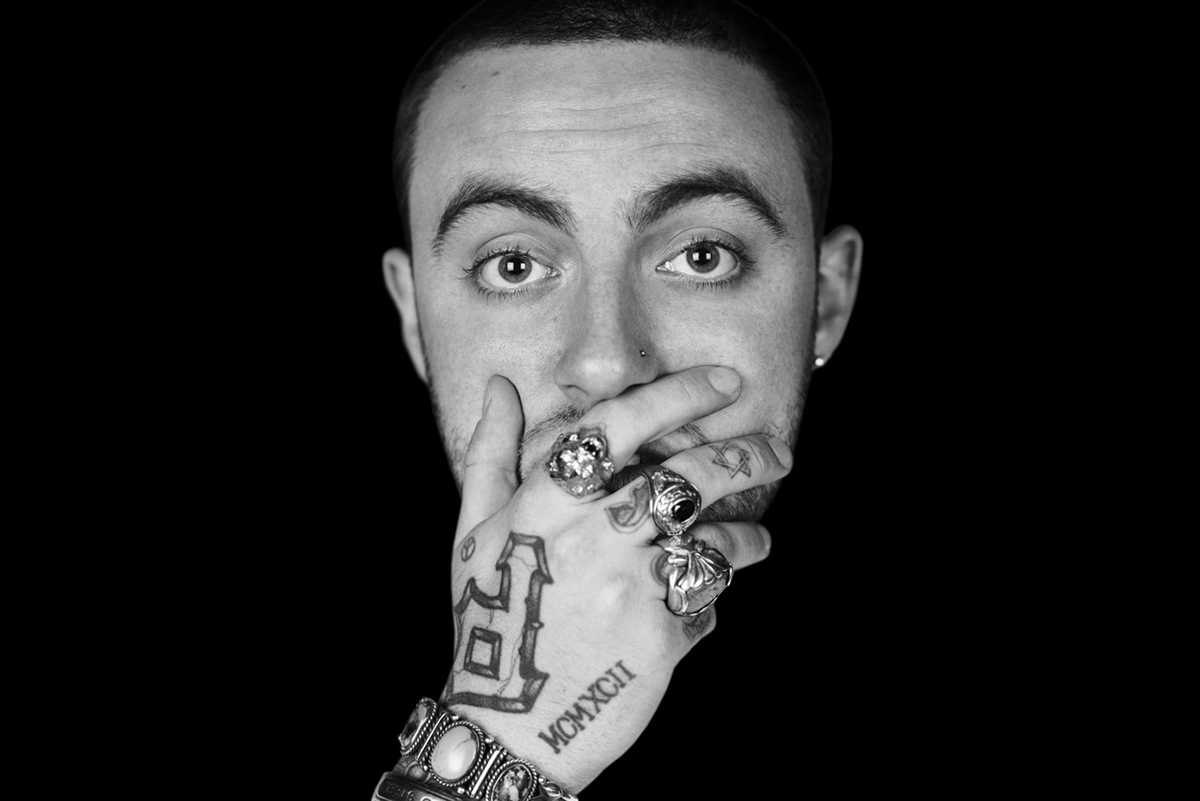 Mac Miller’s major label debut feels modestly grounded, without the heavy expectation and commercial reinventions that seem to come to with the territory. The theme here is Mac’s back and better than ever, and it’s hard to really argue with such a basic grassroots strategy. Although his first proper album in two years, Mac’s dropped two mixtapes and a live album prior to GO:OD AM, not even beginning to mention an assortment of collaborative work he’s amassed through working relationships with Ab-Soul, Danny Brown, Earl Sweatshirt, Schoolboy Q, and Vince Staples, among others.

This is an album that comes at a time when Miller’s spotlight seems brighter and more focused than ever; a time when his personal life, more exposed than ever, almost begs to be recast as an elaborate, well-funded and well-produced album that cements his status among the giants of his generation; hence, GO:OD AM. Does Mac finally have the support he needs to take things to the next level? Let’s check it out.

1. Doors
Produced by Tyler, the Creator
It’s cool to see Tyler producing songs for other people. I’m not sure that, sonically, the intro fits the rest of the album for me. On its own, it’s an okay song with an interesting vibe; Miller himself says this is his favorite song. It does set a great tone for the album, but also stands out a bit too much from what the rest of the album sounds like.

2. Brand Name
Produced by I.D. Labs
I like the hook and the beat on this song a lot. Miller delivers a few punchlines like, “I’m on my ps and qs like lmno”, kind of just riding and having fun with the beat. With the outro at the end, I almost wish the album had just started here instead of the brief intro at the beginning.

3. Rush Hour
Produced by I.D. Labs
This song is only okay to me; there is not much else I feel the need to say about it. I really like the beat, but the hook just doesn’t get the job done. A decent song overall, but I feel as though the album would be a lot tighter without it.

4. Two Matches
Featuring Ab-Soul; Produced by Sounwave, Axl Foley, & THC
The sequel to Watching Movies With The Sound Off‘s “Matches”. At first I thought I liked Ab-Soul’s verse a little better than Mac’s, mainly because of the “roll that weed, nigga/shake that ass, ho” line Soulo borrows from “Just Have Fun”; but Mac of course held his own:

Had to write my wrongs, the day’s short, the night is long
I’m makin’ corpses when it’s on and eatin’ swordfish
From gigantic portions, Lord is important, but I am stronger
I’m a monster with the heart of a lion divide and conquer.

This song sets itself apart from the original in its fervent spirit of determination mixed with a willingness to let loose and have fun; it’s definitely one of my favorite songs on the album.

5. 100 Grandkids
Produced by Sha Money XL & I.D. Labs
The first single off the album garnered attention mostly for its unconventional music video. The verses and the beat are nice, but the hooks feel too thin to carry the song. I like the second part of the song, and the refrain “back when I made my first 100 grand”, better than the first part.

6. Time Flies
Featuring Lil’ B; Produced by Christian Rich
At first, I was afraid that Lil’ B was going to rap and ruin another great beat; however, as the song went on, I wanted him to, if only to make the song more exciting. The beat on this one is great, and Mac kind of just rides it without trying too hard. Lil’ B is the most exciting and unorthodox part of this song, as much as I hate to admit it.

7. Weekend
Featuring Miguel; Produced by FKi, Jamil “Digi” Chammas, & Charlie Handsome
I’m surprised this wasn’t released as a single, because it sounds like the obvious radio song. Mac is riding the beat again, again not really trying too hard. Miguel did a good job, I thought. I’m not sure how you make a song about the weekend without The Weeknd, but the results came out okay enough.

8. Clubhouse
Produced by THC
This is the kind of song Mac makes in his sleep, which isn’t to say it’s not a good song; there are lines like “slow down like dial-up”. It reminds me of songs like “Senior Skip Day”, with a very easy, fun, loose flow over a nice beat. This song feels a lot longer than it actually is to me, but I’m not sure why. I can see why this was chosen as one of the singles; it’s a good song.

9. In The Bag
Produced by Sevn Thomas
The Domo Genesis intro on this song is great, one of the memorable moments on the album. Although the beat is hot, personally, I don’t care to hear Mac Miller rap over this type of song. I guess there is some enjoyable irony in a white rapper saying, “this music makes white people mad”, but it was lost on me. I can understand if other people disagree with me on this.

10. Break The Law
Produced by Drew Byrd & Thundercat
So far, the beat selection has been consistently enjoyable and unorthodox. Mac’s not just riding the beat, but delivering solid lines on this one:

Still, the hook is a little tired; it reminds me of a lite-version of “Radicals”. The breakdown at the end of the song is great though.

11. Perfect Circle/God Speed
Produced by Frank Dukes
This is positioned to be the midpoint, centerpiece song of the album, but it feels like it’s coming too late; many of the themes on “Break the Law”, “In The Bag”, and “100 Grandkids” are repeated for emphasis. This song, like the album, feels very top-heavy as a result. The beginning has a slow, steady build-up to the ending’s sprint to the finish. And what a sprint it is, but there’s still another third of the album left.

12. When in Rome
Produced by I.D. Labs & Sledgren
You might be able to guess what this song is about from the title, but if not, it’s a riff on the YOLO theme. This feels like a more authentic version of “In The Bag”; it may be the hardest song on the album. I also really like the transition from “God Speed” to this song. I wish the hook was a bit more varied, though.

13. ROS
Produced by DJ Dahi
On this song Mac raps about the impermanence of love. The smoothest song on the album, it’s placed between two other, more boisterous, tracks, and even after multiple listens I wasn’t able to understand this. The song itself is nice, but its placement is distracting in the scheme of the album.

14. Cut the Check
Featuring Chief Keef; Produced by Vinylz
This is the part of the album where I really felt the listening experience drag. Vinylz’s signature style is heavy on display here; Keef messed around and dropped a real verse, too–the best I’ve heard from him in some time. Yet, in spite of that, this song doesn’t really stand out. “How convenient” isn’t quite compelling enough to serve as an effective hook, and this late in the album I can’t stop thinking, “what more can there be?”.

15. Ascension
Produced by I.D. Labs
I love the sample on this one and Mac’s unvarnished look at his personal life is refreshingly honest. Still, this is a song that I feel would be better appreciated with less of a road traveled to get to it. On my first listen I felt tempted to race to the end by this point instead of taking and enjoying each song by itself. By itself, it’s one of the most expressive and fleshed-out cuts on the album.

16. Jump
Produced by Badboxes, DJ Dahi, I.D. Labs, & SAP
It feels way too late into the album for a song called “Jump”. I can’t get into this one at all, and especially not at the very end of the album. SKIP.

17. The Festival
Featuring Little Dragon; Produced by I.D. Labs & Little Dragon
Little Dragon is a great band. I like their music a lot and it’s unexpectedly cool to see Mac work with them. This song is kind of like the reverse of the introduction, in that Mac was opening the “doors” at the start and now is closing them. He goes from musing on his absence to musing about leaving everything behind to go to California, to go to “the festival”. As an ending, it works extremely well at wrapping things up, but the bit at the end was puzzling.

GO:OD AM features what I would call the one of the best, most cohesive beat curations of Mac’s career. What’s even more impressive is that he’s able to stretch himself across these seventeen songs mostly unaided, delving deeper into his personal life for the right material.

However, the album may be a bit too generous for its own good. though ten minutes shorter than To Pimp A Butterfly, it actually feels longer and less compelling; though forty minutes longer than I Don’t Like Shit, I Don’t Go Outside, it actually feels more reductive and less introspective. The subject matter jumps back and forth between “I still know how to party and have fun” and “I’m changing my ways this time”, which wouldn’t be a problem if it didn’t feel as disruptive as it does at times. For all its bravery and cohesion, it would be a much stronger, much tighter statement with three or four songs trimmed.

I would say that I expected a little more from Mac’s major label debut. There are fewer surprising moments like on Watching Movies With The Sound Off, and with so many other rap albums released in the last year, I’m not sure that this makes the significant impact Mac was hoping for. Still, GO:OD AM is a top-form, consistent showing that stands tall among his previous work.