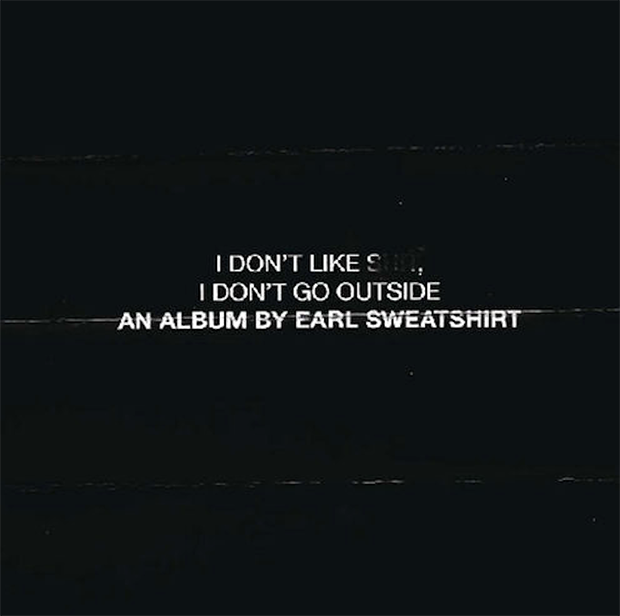 “OF is done,” my friend told me off-handedly, during a conversation on Facebook about this album. “But Earl can stick around if he plays his cards right.”

When I listen to Doris now, it’s striking to me how quickly Earl was able to crossover and expand the themes that made OFWGKTA the name in counterculture rap. Tyler had to make an album like Goblin before he could distance himself a bit more with Wolf. Earl, on the other hand, was comfortable melding styles on a record that was a simultaneous evolution and regression.

Odd Future, as my friend said, has seemed to lose a lot of the buzz it had earlier in the decade, maybe from an adjustment in focus. While the group have always been merchants of youth, their current musical pursuits are now aimed at the disillusionment of success rather than the rejection of it; attention and opportunities have matured the group such that they recognize the rewards and the complications together, and are continually forced to reconcile these contrasts on each new project. The music takes itself a bit (but not too much) more seriously, and the observations become more ironic than irate, more distant than depressing.

Never has such distance and irony been put on more display, especially from Earl, than on an album with the title I Don’t Like Shit, I Don’t Go Outside: An Album by Earl Sweatshirt. The last album was named in honor of his grandmother while this effort seems to continue a recent trend of naming and showcasing irreverent titles over the music itself. Seeing this, I was curious to what extent I Don’t Like Shit would be an evolution, and to what extent it would continue to regress into old themes. Let’s check it out.

1. Huey
Produced by Earl Sweatshirt
Three of these songs are under two minutes, with just one verse and a small outro to transition to the next song. I feel pretty ambivalent about this song as an introduction, mainly because it sounds almost nothing like what’s to follow (like a leftover from Wolf).

In the context of the album as a whole, I was able to understand its purpose as the first song once I’d played through it once. I still mostly skip this song on repeat listens, even though Earl does have a few lines on it:

I’m off the lancy, I reek of reefer and show money
It’s Early running with niggas, who cold running shit
The wins like lotion, he get it and go rub it in.

2. Mantra
Produced by Earl Sweatshirt
This is the “formal”, much better introduction to the album. The hook says it all:

Get your lady
Cop piff, inhale and cough
Rip the label off this
Picked the road that got twists
I’m holding my dick and playing cautious.

Comparing this song to track two off Doris, “Burgundy”, the verse order is switched so the rewards of success come before the complications. Earl caps off the second verse, concerning the end of his relationship, with “what the fuck are you offering here,” almost turning the question back on himself and letting it hang in the air as the beat plays out. This the album’s true starting point, and a well-crafted one at that.

3. Faucet
Produced by Earl Sweatshirt
The production on this album is quite impressive so far, which I think solves one of the problems Doris had a few beats in: this album is just a much more seamless listen with greater stylistic consistency; you can hear the sounds of a faucet, for example, at the end of the last track and during the beginning of this one. I’m not sure why, but the song “Gold” by GZA came to mind as this played; it could be the hook, maybe.

My days are numbered
I’m focused heavy on making the most of ’em
I feel like the only one pressing to go upwards
It’s still fuck you and whoever you showed up with.

Can’t put a smile on your face through your purse or your pocket
Shit in a pile, never change, I’m stupid for trying.

4. Grief
Produced by Earl Sweatshirt
This song, to me, is like “Chum” 2.0: it wears its heart on its sleeve, the beat is lo-fi with a drum change-up at the end, and the hook seems to come in at the middle of a line instead of the beginning. I very much prefer this song to “Chum”, mostly for the beat and the first verse.

My favorite lines are:

Step into the shadows, we could talk addiction
When it’s harmful where you goin’ and the part of you that know it
Don’t give a fuck, pardon me for going into detail

Who turn to get up? Get dude turned to dinner quick
You circus niggas, you turning into tricks
I was making waves, you was surfin’ in ’em…Cut the grass off the surface
Pray the lawnmower blade catch the back of a serpent nigga’s shit.

Earl has always been so good at using enjambment to add weight to his flow. One of the clear highlights of the album and his bestselling song on iTunes.

5. Off Top
Produced by Left Brain
This song reminded me of “Uncle Al” from Doris. I love this beat. Earl’s lyrics always the shine the best when he combines stark, minimalist beats with his minimalist aesthetic:

I’m only happy when there’s static in the air cause the fair weather fake to me
Living in the scope, hairs crossed like adjacent streets
Dare a nigga think its sweet, never, bitches funny boy, you berries
And you honey for the bear that’s here to tear and eat

A solid cut that’s over too quick. 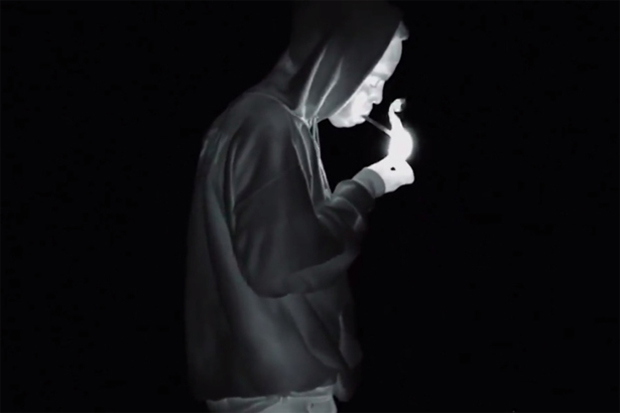 6. Grown Ups
Featuring Da$h; Produced by Left Brain
This beat hums with an intense, almost malevolent energy; an ominous key at the end of each bar unsettles the ever-shifting equilibrium. The verses have more or less the same subject matter we’ve seen thus far: growing up in a fatherless home, feeling untrustworthy and cautious, indulging in vices to cope with stress. The first verse seems to run right into the bridge that runs right into the second verse, which ends abruptly. It almost feels like the beat suffocates the song. Another solid cut that seems to start and end without focus.

7. AM // Radio
Featuring Wiki; Produced by Earl Sweatshirt
My first exposure to Ratking’s music was seeing them live at Earl’s show in D.C. last summer. I wasn’t totally impressed, but I wasn’t bored during their set, either. Their music had a tinge of reggae to it, and you can definitely hear those same influences here on Wiki’s first verse, as he delivers a half-sung/half-rapped verse over a chilled out beat.

Earl sounds the most relaxed thus far while delivering his second verse, firing off lines like:

After this, mind in the trash next to where my fucking passion went
Doc’s fanatics, half-a-Xanax when I’m traveling six hours or more
Brick out on the tour, got kicked out of the morgue
Spit cattle manure shit, shit, rally the horsemen
Tally the corpses

The song’s second part, “Radio”, is an instrumental that runs a minute and a half, preparing our ears for the fun final third of the album.

8. Inside
Produced by Earl Sweatshirt
If there was any part of the album where Earl had the most fun, it would have to be on this part of the album (“crazy for this one!”). The beat from “Radio” serves as the perfect transition to this slower, just as laidback, instrumental. Earl’s flow on this one comes almost a bit too easy on another transitory track clocking under 2 minutes:

Gotta say that as of late I’ve been
Busy with business mostly, got a tape, catch a wave
Now you in the industry ocean, missing out on your boat
I’ve been figuring out my own fish…

He ends it by taking one of his own lines from a Mac Miller song and repeating them in context, and with greater clarity, on the album (“I blow a spliff before the ink dries on the paper/And lately I don’t like shit, I been inside on the daily”). A solid offering.

9. DNA
Featuring Nakel Smith; Produced by Earl Sweatshirt
A very downbeat track that starts with a slow, ominous piano loop before the drums come in. This song feels like the emotional low point of the album before everything comes full circle.

Earl can’t resist but try the “Versace” flow before slowing it down and then speeding it up again. The hook on this song is the best on the album, in my opinion, and the addition of Nakel Smith on the song fits well; though he’s not as lyrical or compelling a rapper as Earl, Smith’s contribution feels right at home with the song’s subject matter and style. The beat rides out for more than a minute before the next track starts. One of the best tracks yet.

10 .Wool
Featuring Vince Staples; Produced by Earl Sweatshirt
It wouldn’t be an Earl album without a Vinny Staples feature, of course. The sound of the album switches sharply at this point from downbeat to upbeat, connecting it with the production style of the first track and making the album a solid, cyclical listen. This song easily ranks among their best collaborations to this point.

Earl seemed vengeful for “Hive” on this one, going straight for the jugular:

On my momma I been limiting my features
Filing swishers up with reefer
Bitch, it’s difficult to beat him like a soft dick
Golf clique deep and we don’t hit the streets passive
That nigga Sweaty got the gas and Shreddy K brought the matches
Put your body down in water like a Lipton tea bag is

Another clear standout as the album comes to a close.

Bottom Line:
Earl developed his style as much as he could without alienating his core fanbase. The production of the album, handled primarily under his direction, is cohesive and brooding without being overwhelming. Another thing this album has going for it is its brevity: clocking it at just under 30 minutes, I was skeptical about whether or not this album would be worth it. But in keeping the album short, Earl avoids falling into the same trap Tyler has in his quest to craft a memorable album: his subject matter doesn’t get too repetitive, despite repeating and elaborating on similar themes throughout, and it rewards repeat listens a lot more. Liquid Swords came to mind at several points during my first listening, although I won’t make a more direct comparison between the two albums.

I could see Earl’s winning strategy being one project under 35 minutes dropped every 18 months, especially if he decides to continues to evolve this anti-commercial, alternative rap style. Listening through this album from front to back is deceptively easy, a quality all great albums seem to share. Of course Earl’s bars haven’t lost their razor edge, and his production continues to enhance his singular aesthetic and wordplay. In further divorcing himself from the OFWGKTA camp and bringing his own associates to the forefront, Earl has crafted his most insular, listenable album yet, and takes another step towards establishing his legacy.