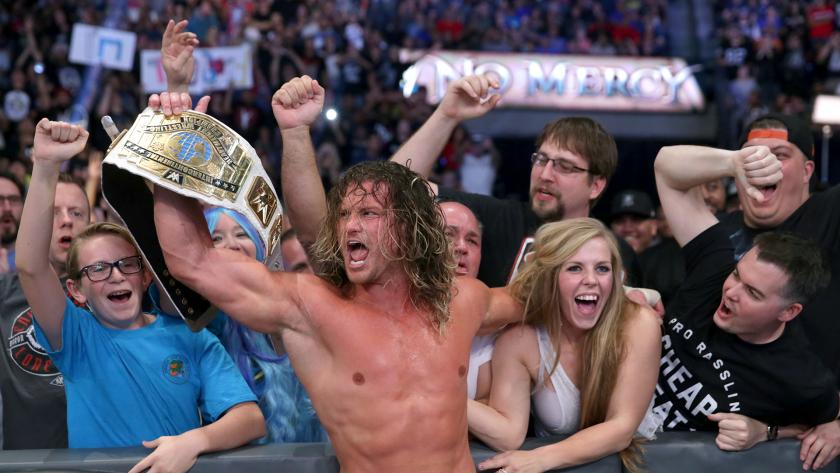 Sunday was packed. A presidential debate, football, and most importantly, WWE No Mercy. I looked at all of these while also trying to work which makes my job today the least important (And even I got kids like Heath Slater!). But we’re here for pro wrestling right? No Mercy was all of the place too with the “main event” opening the card, the SmackDown’s Women Championship match canceled, and Bray Wyatt vs. Randy Orton closing the night.

Before we get started, be sure to check out The FRO Horsemen Podcast (AKA The Blackest Wrestling Podcast on the Planet) featuring yours truly and my boy GQ-Blu. Also, if you want to watch wrestling along with us via Twitter during Raw, SmackDown, or WWE PPV’s use the hashtag #FROHorsemen. You’ll be the coolest person on social media.

WWE basically threw the rest of the entire tag team division on the pre-show. It was okay I guess but all of these teams could’ve stayed in NXT a little longer. The Faces (The Hype Bros & American Alpha defeated The Ascension & The Vaudevillains.

AJ Styles is STILL “The Champ That Runs The Camp”:

AJ Styles has not had a bad match since coming to the WWE. This match with him, Dean Ambrose, and John Cena wasn’t his best but it was good. They had a weird moment when AJ tapped while in the Calf Crusher and STF at the same time that made them restart the match. There were some great spots too like this double suplex:

I was cool with the ending and Styles retaining (Steel chair use or not). John Cena, who seemed a step slower, will eventually get his 15th title reign and tie Ric Flair but it shouldn’t be at No Mercy.

I’m happy Luke Harper is back and I’m also happy he helped Bray Wyatt get a much needed win over Randy Orton. But their match shouldn’t have went on last. The match was also kinda boring and it felt like both wrestlers weren’t giving it their all. Sadly, I don’t think this is the end of the already weak feud. Either way, welcome back Luke (Bray has needed help for a while).

The Miz versus Dolph Ziggler should have been the true main event of the night and that point was made on Talking Smack after the event. I didn’t really care about this match going in but as it unfolded I got more invested; That’s how you know it was a good match. Ziggler had to overcome yet another spray to the eyes from Maryse and even a Spirit Squad appearance to win his 5th Intercontinental Championship. Good job Ziggy.

Nikki Bella finally defeated Carmella. I know a lot of people hated this feud but I thought it gave Carmella character.

Heath Slater & Rhyno surprisingly defeated The Usos and retained WWE SmackDown Tag Team Championship. I feel like they might lose them on Tuesday. If not, what tag team is next up?

Baron Corbin versus Jack Swagger got promoted from the pre-show to the main card. Baron rightfully went over. Now put him in the main event (After you cut his hair).

After it was revealed that Becky Lynch was injured and couldn’t wrestle, Naomi filled in and defeated my girlfriend Alexa Bliss. Alexa will still get a title shot at a later date but does that mean Naomi will be involved? Probably not.

All in all, No Mercy was an average show that had some weird spots. See you in three weeks at Raw’s Hell in a Cell.