Summer 2018 heroes are not just on the big screen, this June saw the release of Marvel’s Luke Cage season 2. Luke Cage is Marvel Television’s second series release this year following Jessica Jones. The drop of season 2 is coming almost two years since the release of it’s debut. Last year Marvel decided to release The Defenders featuring Cage instead of releasing a second season of it’s stand alone which I was fine with. When the series was first announced three years ago, I was very excited it was pre Black Panther and Black Lightning so it was nice to finally see a hero of color come to the screen big or small. After season dropped it left a sour taste in my mouth, out of thirteen episodes it was only a few that I seemed to enjoy. The series hit its peek within the first few episodes then fell flat. After the release of the season 2 trailer this spring, my anticipation wasn’t that high for its release.

When season 2 was available for streaming it was the first time I decided not to binge watch a Marvel series, I wanted to take each episode in and have time to digest it before watching the next. Season 2 begins after the events of The Defenders, things are very different for Luke Cage (Mike Colter) prior to where the series left off after season . Instead of being vilified Luke is now a local hero and nationally famous. The celebrity doesn’t make life any easier for Cage who is at constant struggle with adjusting to his environment. Cage starts to drank the Kool-Aid and embraces the hero tag that has been put on him. Colter’s portrayal of Cage makes a huge improvement this season compared to the first. I felt Colter physically embodied the character but his acting was flat and one dimensional. While it’s still one dimensional, Colter’s performance was not as flat and mono tone this season which could be due to the cast around him, who tend to be the heart of the show, that keeps it watchable. Starting with Claire ( Rosario Dawson) as Cage’s girlfriend who seems to be losing touch with Luke as his popularity rises which puts a lot of tension between the two this season. 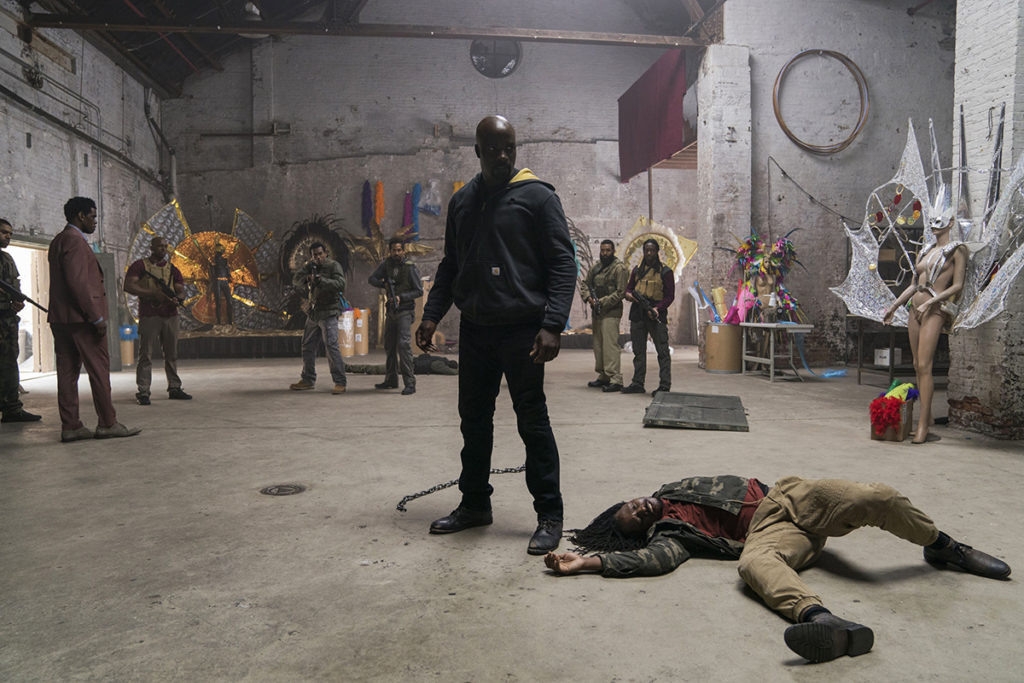 Season 2 brings back the best character in the series, Misty Knight (Simone Missick), who like Luke is in a state of adjustment after losing her arm in The Defenders. Misty is out to prove to everyone and herself that she is still capable and independent. Missick brings a lot of depth to the character with her tough as nails no holds bar attitude. In terms of writing and portrayal, Knight again stood out as a bright point in the series, my only let down was the introduction and use of her bionic arm. Misty’s arm is a staple for the character in the comics. Aesthetically it looked cheap and underwhelming. Season 2 also brings back villains Shades (Theo Rossi), second in command to Mariah Dillard (Alfre Woodard), who brought it this season as the Queenpin of Harlem. Dillard is more ruthless and emotionally volatile than ever. Dillard is still at odds with Luke Cage especially after his release from the prison she helped put him in. Through the course of the season she finds herself in need of the hero for hire when her empire is threaten by this seasons villain Bushmaster (Mustafa Shakir).

Bushmasters character is featured in the comics but a completely different version of him is brought to the series. A Jamaican crime boss Bushmaster is introduced in episode 1 looking to make his presence known in Harlem. Bushmaster is out to take over and get revenge on Dillard but Luke Cage stands between Bushmaster and his goals which drives the story this season. The charter was well written and portrayed by Shakir Bushmaster who became another bright spot sprinkled in this season showing he could go toe to toe with Luke Cage and Dillard. The only issue I had was seeing his arc drawn out for an additional three episodes. One of which was the team up episode of Luke Cage and Iron Fist coming straight from the comics. Overall I enjoyed this season slightly better than the last, the themes where a bit better. I think the show still has its issues, my biggest is the action scenes which are blandly choreographed compared to other Marvel series. This season benefited from B and C storylines making it watchable. I give this season 6.5/10