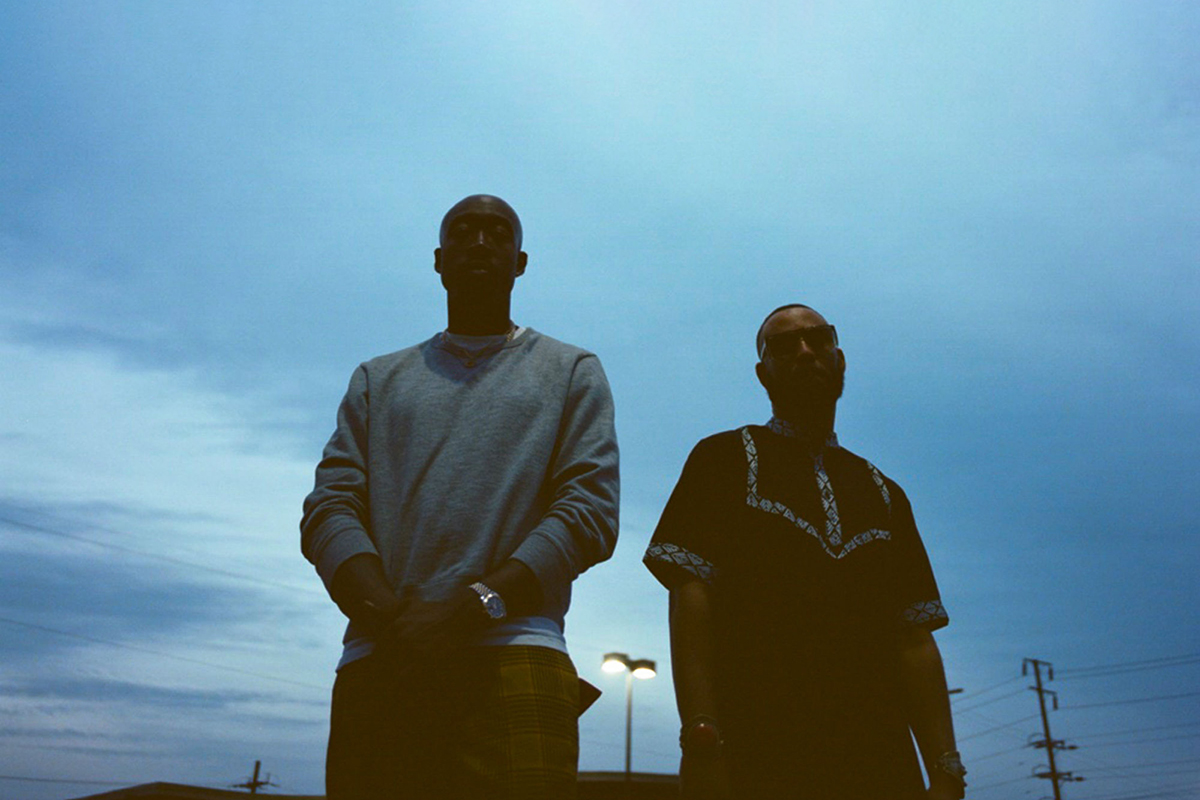 It’s been a little over five years since I reviewed the first album by Freddie Gibbs & Madlib, Piñata. And while that album was well-received by critics and fans, it only raised up the anticipation for what could come next, especially after finding out that another album was in the pipeline as it was announced in 2016.

But now the sophomore album, Bandana, has finally been released. Freddie Gibbs is coming off a couple of enjoyable releases and Madlib is, well, Madlib. A good example of this is him saying that he made all the beats on Bandana on an iPad (Gibbs later went to verify that it was actually an iPad Mini). Either way, let’s see how the sophomore release from the duo sometimes known as MadGibbs turns out.

All tracks produced by Madlib

1. Obrigado
The intro is a combination of Freddie Gibbs and Madlib. It what you normally get with a Madlib project; an instrumental with a woman speaking Japanese (Translation: “It’s time for Bandana, bitch”). Combined this with a sound bite of Freddie’s uncle, the late great Big Time Watts, asking for beer, and it’s a great representation of MadGibbs. We then get to the first song off the album…

2. Freestyle Shit
This song let me know I was in for something special. The first song off an album is always an important thing to set the mood and “Freestyle Shit” is a home run. Madlib brings the triumphant horns lifted from Revelation Funk’s “Elastic Lover” and Freddie brings the well-crafted gangster rhymes (And some good Rocky Balboa related bars):

I’ve always thought that you can tell how an album is gonna go by the intro. MadGibbs came out swinging.

3. Half Manne Half Cocaine
I had to look at the production credits again because while this album was produced entirely by Madlib, I didn’t know he could do trap beats. “Half Manne Half Cocaine” sounds like something that would on Gibbs solo projects like Shadow of a Doubt or ESGN. That’s not a terrible thing but it’s not an eventful thing either. That is until the midway point and we get a beat change.

Now, THIS sounds more like a Madlib beat. The production gets more aggressive as well as the mood and lyrics (“Fuck the needle, she just puff and sniff, Snuffleupagus”). It all kicks up the song to another level and it all makes sense; the first half of the song was “Half Manne” and the second part was “Half Cocaine”. All good.

4. Crime Pays
The juxtaposition of the lyrics from Gangsta Gibbs and the dreamy/airy production from Madlib works well on “Crime Pays”. It’s also kinda funny because while you are vibing out to the floaty beat, you hearing lyrics like “Choppin’ up this change with cocaine in my microwave.” It all works well.

The accompanying music video is good too as no every time I hear this song, I think about Freddie Gibbs as a zebra farmer.

I remember hearing Freddie Gibbs talk about certain beats that Madlib sent him taking him a while to rap too because he had to figure out his approach and flow. I’m pretty sure the beat for “Massage Seats” was one of those. The good news is that they figured it out and show off their range.

6. Palmolive
Featuring Pusha T & Killer Mike
I remember this leaked before the album was released. I was hype to hear it then and I was hype to hear it again when it officially came out. There’s not a lot to complain about; Gibbs, Pusha T, & Killer Mike is a hell of a lineup. It’s a top tier song and standout on the album so it might be easier for me to say what I don’t like:

Other than, no complaints. Wouldn’t mind hearing more from these three talented rappers.

7. Fake Names
“Fake Names” starts out understated and it’s more proof and how versatile Madlib actually is. Gibbs raps a tale about the struggle of being involved in the streets as he paints a vivid picture (“Devil on my shoulder said, ‘Fuck friends cause cash rules'”).

We then suddenly get a beat switch and the change is not only is welcome but had me frowning up and increasing my head nodding (That’s a good thing).

On a more in-depth note: The second half of “Fake Names” samples the same song as the previous track “Palmolive”. The sample is The Sylvers’ “Cry of a Dreamer.” I already download the song and I’m sure Madlib can pull out a few more beats from it.

8. Flat Tummy Tea
I almost forgot that the promotion for Bandana started out with Freddie Gibbs promoting Flat Tummy Tea on social media (The laxative not the actual song). Of course, it was a joke and kinda weird seeing that the lyrics are mostly dealing with serious issues like slavery, jail, and rejecting white Jesus. Add to the fact that Gibbs wrote this jail and the tone of the song gets different.

9. Situations
If I had to point out the song that I liked the least, it would probably be “Situations.” That’s not saying it’s a bad song because it’s not. But I’ve always liked Gibbs more when he is straight rapping rather that when he uses the sing-rapping flow he uses here. Again, it’s not bad but on a project that has twists and turns, this song might be the most straight forward.

10. Giannis
Featuring Anderson .Paak
I wasn’t that into “Giannis” when I first heard it because I felt they could have done more with the Anderson .Paak feature. But then it grew on me. It’s actually a dark song that features the rhyming of Freddie Gibbs more than anything:

Squad, diamonds make haters stay on the job
Keepin’ a baby .380 with me like Khaled stay with Asahd
Bump that poison poppy seed, the Afghani shit from the mob
You’s a cartoon like Flip on the cover of Lucky Charms

I guess it as good as time to point out that most of the song titles on this project are from passing lyrics. Giannis Antetokounmpo isn’t mentioned on the hook or the subject matter, it’s just a line in the song, just like on “Flat Tummy Tea” or “Palmolive.” Just an observation.

11. Practice
If I had to choose, “Practice” is probably my favorite song off Bandana. It’s like Jay-Z’s “Song Cry” but more personal and (maybe) with a better sample. And let’s be clear, the sample used here, Donny Hathway’s “Make It On Your Own”, does a lot of the heavy lifting. But that doesn’t take away from Gibbs sharing some personal lyrics dealing with his infidelity, falling in love with a stripper, and drug addiction:

When all the trust lost
Sometimes the love is soon to follow
Wifey’ll put me out the crib and tell me to come back home tomorrow
When I got caught the fuck up, she hit me with the ultimatum
You need to come home with your daughter, nothing more important than your baby
Drugs got me crazy

The whole thing is even more potent when you realize that the situations rapped about seems to be true. “Delicate circumstances.”

12. Cataracts
With so many beat switches on the project already, “Cataracts” sounds like the beat on the second half of a song. That not to say it doesn’t work because it does. I also appreciate the flow used here by Gibbs as well as the reference to Bernie Mac quotable from the movie Friday.

Funny enough, this song does in fact have a beat switch towards the end. It takes a west coast feel and it makes sense as Gibbs shouts out Tha Jacka. This whole track gives the feeling of like driving around suny California and smoking weed (And I don’t even smoke weed).

13. Gat Damn
I’ve already said that “Situations” was my least favorite track on this project but that statement was false. But “Gat Damn” might be tied for the same reasons I said for “Situations” (Freddie doing a sing/rap flow, the uneventful productions…). And just like “Situations, “Gat Damn” isn’t a bad song; just not a great when compared to the other tracks on Bandana.

Am I the only one getting 2Pac vibes here?

14. Education
Featuring Yasiin Bey & Black Thought
After following up the great combination on “Palmolive”, we get another one with the Mos Def Yasiin Bey and Black Thought featured “Education.” There is a lot to like here. First off, it’s cool to see Gibbs rapping beside certified legends in the game and more than holding his own.

Over a piano-heavy sample of R.D. Burman’s “Dance Music”, the trio covers everything from the Black poverty to the school-to-jail pipeline and with purposely gritty filtered vocals. It fits great on this project.

15. Soul Right
We get to the last song on Bandana, and this feels like a good song to end it off on. Over a bop bap sample flip of “Noises and Conversations” by The Heliocentrics, Gibbs leaves out the same way he started:

Eastside boy, my mama was the mail lady
Brother and my sister got degrees but I got the yayo, baby
Had to beat my case, I can’t turn Irie to a jail baby
Bitch, I weigh that shit up in my crib, I think your scale shady

And after one last vocal-less beat switch/interlude from Madlib, we are at the end of Bandana.

You might have already scanned to the bottom of this article to see the score but yeah, Freddie Gibbs & Madlib delivered a classic with Bandana. And it shouldn’t be that big of a surprise. They were damn near close with their first outing Piñata. The difference is that on Piñata, it felt like it was Gibbs mostly rhyming on beats from Madlibs. On Bandana it feels like Gibbs & Madlibs made songs. The whole projects clocks in at around 46 minutes so it’s barely any filler here.

Let me be honest about me giving this album the classic status. This is my kind of music: Well crafted and delivered gangster rhymes over well produced dusty soul samples. It a thing I fell in love with ever since The Blueprint dropped and Bandana might be the best version of that type of Hip-Hop I’ve heard of this since then. Bandana isn’t just a great album but shows the chemistry between two artists at the top of their game. Here’s hoping that we get more projects in the future from this talented odd couple.