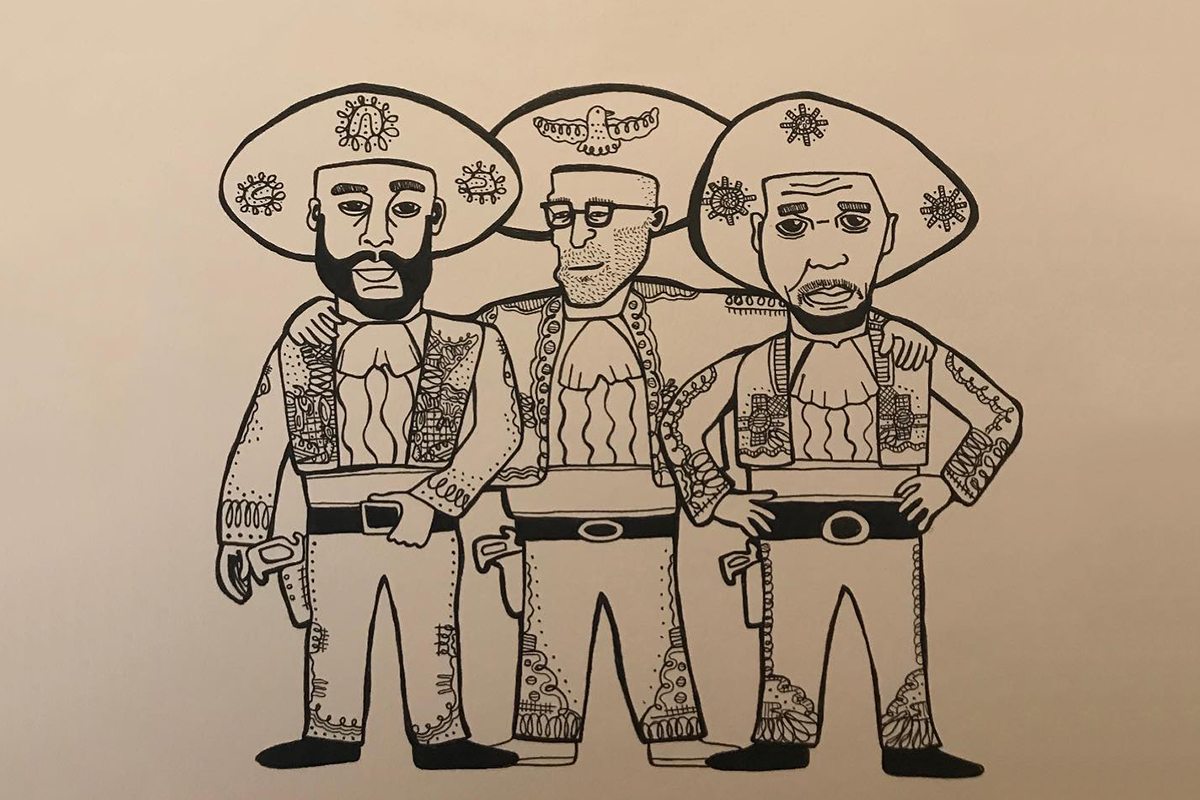 Curren$y, Freddie Gibbs, & The Alchemist made Fetti in two days. And while rappers recording projects fast isn’t a new thing in 2018, Curren$y announced the project all the way back in January 2017. I actually remember seeing Gibbs and Spitta go back and forth and roasting each other on Instagram about turning in rhymes to The Alchemist and then days later, it was announced that Fetti would be released on Halloween.

This all makes sense too. Curren$y & The Alchemist have already done projects together with Covert Coup back in 2011 (Which Gibbs was featured on) and Carrollton Heist in 2016, this time they just added Gibbs to the equation. More importantly, Gibbs & Spitta were featured on the soundtrack to the Windows version of Grand Theft Auto V. The song was of course called “Fetti” and of course it was produced by non other than Alchemist.

So how does Curren$y’s laid back rhymes, Freddie Gibbs’s aggressive bars, and The Alchemist’s soul sampled driven production sound for a full project? Let’s find out.

1. Location Remote
Produced by The Alchemist
This is what I’m here for. No hook. Just Spitta Andretti & Gangster Gibbs spitting that shit over ALC production. The beat is dark and gives room for the rappers to follow that mood. Curren$y comes in first and does his thing but Gibbs steals the show with the his verse:

Trump sweating bullets on Diet Coke sniffing powder up
And if he build the wall we gone bring that dope underground with us
Told my nigga Spitta your enemies my enemies
I just solar powered up the Model X
Real nigga keep same energy, like what
I rep The Pack like I’m Stunna Man
Legend in this bitch, might do Coachella as a hologram, nigga

2. The Blow
Produced by The Alchemist
“The Blow” is probably the best instrumental track on the entire album. It feels like a 70’s inspired beat and like the song suggests, the lyrics are about cocaine dealing. Curren$y is known as a “weed rapper” but I’ve always enjoyed when raps about selling drugs (“From helicopters, federal photographers takin’ pictures/My driveway full of Impalas and I’m not stoppin’ for one minute”). The song is a win.

3. New Thangs
Produced by The Alchemist
While the previous track has the best production on the album, “New Thangs” is probably my favorite track off Fetti. The guitar sampled loop powers the song and both Gibbs & Spitta show up with a deliberate flow that matches the beat structure. When wondering how this album would sound, I was hoping we would get something like this. I happy we did.

Random Sidenote: I shouldn’t even mention this but it’s a part in Freddie Gibbs’s verse where everything goes off beat. I feel like with more time they would’ve fixed this.

4. Saturday Night Special
Produced by The Alchemist
This feels like something you would hear on a Curren$y solo project. I think this is better because it feels like Freddie Gibbs motivates him. The tone is also like the first track which is welcome change after hearing two soulful leaning tracks. This is also the only track to have some handoff in terms of verses from the rappers:

Curren$y – “Russian Roulette, the American Dream could be your death/Or it could be everything”

Freddie Gibbs – “It’s M.O.B. everything/Back in ’03 had Gucci seats, I put Gs on everything”

5. Now & Later Gators
Performed by Freddie Gibbs; Produced by The Alchemist
This is one of the solo songs off the project. This is also the one song that I’m conflicted about. It’s not a bad song either. The production is good and the rapping is good, but it’s the singing from Freddie Gibbs that throws the whole thing off. I understand that Freddie has been doing the pseudo R&B thing (Especially on his last album), but I wish they would’ve let the Ann One (The woman who does the background vocals on the song) just do the hook by herself. Still, I hold the right to forget all of what I just said and love this song in a few weeks after repeated listens.

6. No Window Tints
Performed by Curren$y; Produced by The Alchemist
I know I mentioned that “Saturday Night Special” sounded like something you would hear on a Curren$y solo project, but “No Window Tints” is an actual Curren$y solo song. Spitta talks his shit over something that sounds like ALC made during his “We Gonna Make It” days (Which is a good thing). The only problem is that it’s the shortest song on the album coming in under two minutes. I wanted to hear more.

7. Willie Lloyd
Performed by Freddie Gibbs; Produced by The Alchemist
The name of this song is named after notorious Vice Lord gang leader Willie Lloyd. Now with that knowledge, you know this song is on some gangster shit. Over production that could live on the score of a horror movie, Gangster Gibbs lets some rounds go:

Straight out the sewer like Das EFX
Which one of you fuck niggas want it next
In my dreams I see faces of death
I’ma pray for you hoes, get your Rosary, cross your chest

This song is more in line with what Freddie Gibbs normally does with his solo material but it fits well on this album.

8. Tapatio
Produced by The Alchemist
If there was an “album track” on this project. It would be “Tapatio”. Not to say that it’s a bad song. It’s parts where it drags a bit bit it’s worth a listen. But other than the musical intro and outro inertludes, it’s nothing that really stands out here. Check this one out for yourself.

9. Bundy & Sincere
Produced by The Alchemist
First off, I love that the title of this song references the DMX & Nas characters in the 1998 movie Belly. I also actually have the sample used in this production this time and it’s mainly built around My Darling Baby & Craig Derry’s “Wood, Brass & Steel”. The mellow backdrop help the rappers provide a good outro for this project (They also shout out Mac Miller which was cool too). And that’s the end of Curren$y, Freddie Gibbs, & The Alchemist’s Fetti.

I’m gonna cut to the chase: Fetti is easily one of my favorite album of 2018. Lyrics over soul samples is specifically my kind of music, and I’m happy all three musicians got together to make a project of this type. It’s also short. I know one of the current trends is to put as many songs as you can on an album so you can get more of those streaming checks, but shorter album always cut down on filler (I also admit that I don’t like reviewing long ass album). This is also the closest thing we’ll get to a sequel to Piñata (Which is a classic in my eyes) anytime soon.

One draw back is that Fetti was made in two days. The results are are still excellent but they probably could have been even better with more time. The quick turn around also explains why there is no real back and forth between Curren$y and Freddie Gibbs. The verses were emailed back and forth so they really could do more than verses each (This also probably explains where there was no real promotional photos).

With all that being said, Fetti is still a great project that shows what happens when two talented rappers and one skilled producers get together. Here’s hoping to many sequels seeing that it only takes a couple days for them to make albums like this.