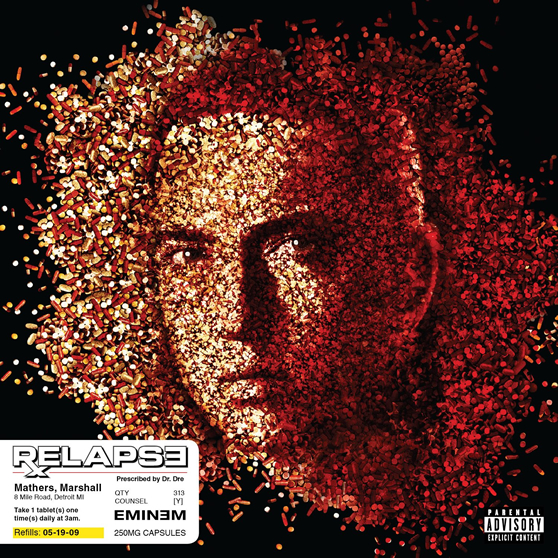 4 albums, 24 or so times platinum on those albums, winner of Vibe’s “Best Rapper Alive” tournament, and a life as THE benchmark for all white rappers and most wordsmiths entering the game….no pressure. Oh, not to mention that this album is one of the most anticipated albums in the past 5 years, second only to Detox. Let’s get Wright into this one, the wait is over.

1. Dr. West (skit)
Featuring Dominic West; Produced by Dr. Dre & Eminem
I’m not going to try and break things down to the nth degree, but this lead in is dope. I look at it as a great metaphor to what folks deal with on a regular basis. The more you try and do better and evolve, the more folks want you to fall into your old ways. The same folks you look at to help you motivate and change tend to try and hold you back in one way or another. Sometimes, that person is even your own voice. No, I’m not on drugs…just what I get from it.

2. 3am
Produced by Dr. Dre
What better way to open an album than with a 5 minute story complete with dead bodies, chases, blackouts, abuse and self mutilation, and a quote from Silence of The Lambs as the chorus. Eminem is at his grizzly best on this one. One of my favorite songs he’s ever done. Dr. Dre somehow keeps getting better…I don’t understand. He’s not overly complex, he doesn’t sample the world but what he does is just make shit to keep ya heads ringin’. This song is a flawless victory.

3. My Mom
Produced by Dr. Dre
I really like this track, it feels so Hip-Hop. The horns and drum variations on this one keep it funky for me. You can tell by the title, it’s another song about his mom and the drug use and abuse (shout out to lawsuits). If Em is nothing else, he’s consistent. This song is a fun song to me and would really fit in well on the Slim Shady debut* album.

4. Insane
Produced by Dr. Dre
I think the name for this song is based on the beat. I love this track! Eminem kills this shit too. Now, it is Eminem, I’m sure that typing the lyrics out will make you cringe. But rest assured my man is on top of his game on this one. I’d put this right up there with one of his best songs too.

5 Bagpipes From Baghdad
Produced by Dr. Dre & Trevor Lawrence
Hey, sometimes Hip-Hop comes with bagpipes I guess. This track comes off a lot better than some other stuff that is currently out in the same vein as this. “Mariah whatever happened to us/why did we have to break up/all I asked for was a glass of punch/see I never really asked for much/I can’t imagine what’s/going through your mind after such/a nasty break up with that Latin hunk.” Eminem has his sights on Mariah for this song and even with a topic that I don’t care for much (not a big Mariah fan) his lyrics don’t falter on this one. I dig his delivery and flow on this one completely. Oh, shouts out to Nick Cannon who’s taken offense from Eminem of all people. If a man can get sued by his own mom, I doubt he gives a shit about you being upset.

7. Tonya (skit)
Nice set up for the next song, sick as usual, but it works well.

8. Same Song & Dance
Produced by Dr. Dre & Dewaun Parker
Serial killer song anyone? The track goes with this horror movie made Hip-Hop song quite well. Methodical and haunting back drop as Eminem paints the picture as a serial killers confession comes to life. Hey, you listen to drug deals and shoot outs on albums, why should this be any different? I’m diggin’ this one…no Manson-O.

9. We Made You
Produced by Dr. Dre, Doc Ish, & Eminem
We featured this one on the site, most of you didn’t like it…I was with you. It has since grown on me, mostly influenced by the beat. When you listen to Em, it’s not a bad song at all. I think his videos are sometimes to off the wall, that we don’t pay attention to what he’s saying. “Damn girl, I’m beginning to sprout an alfalfa/why should I wash my filthy mouth out/you think that’s bad you should hear the rest of my album.” Well said homie.

10. Medicine Ball
Produced by Dr. Dre & Mark Batson
At this point, I can’t do anything but shake my head at the tracks I’ve heard thus far. The production on this album is scary good. Dr. Dre is giving Eminem some dope ass tracks and Eminem somehow manages to step it up as well. Right from the offset, “Welcome to the Slim Shady Mecca, Rebecca/it’s the village in New York right next to the Tribeca/it’s my secta’(sector)/homosexual disecta’/come again, rewind selecta’/I said nice rectum/I had a vasectomy Hecta’/so you can’t get pregnant if I buy sex and errectya.” The hook on this one is just as ill. “I guess it’s time for you to hate me again/Let’s begin now hand me the pen/how should I begin it and where does it all end/my medicine ball, you’re in my medicine ball friends.” Damn…he didn’t have to bring up Christopher Reeves though.

11. Paul (skit)
This skit will never get old to me

12. Stay Wide Awake
Produced by Dr. Dre
I don’t know what else to say. From here on out, I’ll only try and mention Dre in the review if there is something else to say other than “another dope beat by Dre” cause he’s really got his foot in this shit. Eminem vocally rides the beat and when it builds and the guitar comes in, Eminem gets even more frantic with it.

13. Old Times Sake
Featuring & Produced by Dr. Dre
This beat sounds like a leftover from Chronic 2001. I think the real tragedy is that Dre may have written his own lyrics on this one. Eminem even sounds more pedestrian on this one. I’m sure this one is aimed at the radio as it was released as a single. I’m not feeling this song in relation to the rest of the album. It’ doesn’t really fit well on here at all.

14. Must Be The Ganja
Produced by Dr. Dre & Mark Batson
This song comes off really boring. The beat is just okay and lyrically, I think Eminem is just trying to recycle some rhymes. There goes the possibility of a 5 star album.

16. Déjà Vu
Produced by Dr. Dre
Dre produces a really good song that has a lot of layers of strings and chords. This is one of the better cruise type songs on the album. The hook is catchy and I’m kind of shocked this one wasn’t released as a radio song. Eminem goes into some personal issues, for real this time, and mentions Proof’s death and how that’s not an excuse. Once again, Eminem showcases his storytelling and really puts the video for this song in your head. No, there’s no video, but he laid it all out with this one. This is a great recovery from the previous song.

17. Beautiful
Produced by Eminem
I have no idea why this song is not the last song on the album…and I have even less of an idea why this wasn’t released as a single. I think this is Eminem’s dopest song PERIOD. Now, I am a sucker for songs that give us insight into who you are outside of the antics that compile your career and songs that we can relate to. This is his most vulnerable song and seems to be the most sincere. Triumph over tribulations, the desire to fit in, personal loss, growth, perception, and understanding are all discussed here. I may be on an island on this one, but this really is my favorite Eminem song ever.

18. Crack a Bottle
Featuring Dr. Dre & 50 Cent; Produced by Dr. Dre
Unless I’m crazy, this song came out a while ago. If it hasn’t then this is a leftover song from someone’s album. I think that the arrangement may have a lot to do with this as the previous song should have been the last song.

20. Underground/Ken Kaniff (skit)
Produced by Dr. Dre
This beat always confuses me at first. On the hook, they sing on the upbeat and on the rest of the song, Em flows to the downbeat. When they switch between the hook and the song, I always stutter step. It’s not a bad song at all though. The Ken Kaniff skit at the end is cool too.

21. My Darling
Produced by Dr. Dre
One of the songs we’ve all heard by now. I have to say that I’m glad this one was left off the album. I don’t like the beat and lyrically, Em sounds like he was sleep.

Bottom Line:
I don’t sell drugs, fuck various bitches (their words not mine), drive a fleet of cars, live in the biggest house, spend insane amounts of money, make it rain, sip champagne at 1k a bottle, shoot people or wear expensive jewelry either, but we hear that far more often than we should. So why do folks give Eminem flack for his content and subject matter. He’s one of the few rappers that openly treat the industry like entertainment. Sure, he talks about his home life and the drug issues that are a part of his upbringing and development, but he also talks about things that he hasn’t lived and isn’t claiming to live. Now, where to rate it? We don’t do fractions on The Fro so it’s either a 4.5 or a 4. Even while you read this review, the rating may change. I think that it’s easily on par with Rick Ross and Jada for rap album of the year. The scary thing is that even with the missteps, I think it’s slightly a better album than those two right now. It’s a tough call. I’ve read the reviews online and folks are all over the spectrum on this one. Some love it, some hate it, and yes, some folks are right on the damn fence. I’ve heard a lot of people say that it’s not classic Eminem status…but they said the same thing about the Marshall Mathers LP when it first dropped, and that is largely regarded as his best album. The one thing I think we all can agree on, it sounds good to have him back in the game. This Relapse is a good thing indeed.

nappyPicks: Too many to choose, see you at the register!