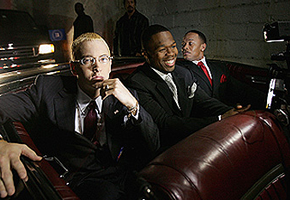 So as you know by now, we really aren’t the “throw up a new song every 5 seconds” type of website. But as usual, we make exceptions. With all the talk about Eminem’s upcoming album Relapse, it’s funny no one here mentioned “Crack A Bottle”. It first showed up late last year on Big Mike’s mixtape 4th Quarter Pressure Part 2 (Then called “Number 1”). The funny thing about the song was that it was a reference track with Em rapping both his and Dr. Dre’s part (Like we didn’t already know this happened…). I guess with Aftermath being so secret, it was weird they would let the world sneak a peek behind the scenes. A “No DJ” version leaked soon after and finally today we have a (maybe) finished version with Dr. Dre finally rapping his part and 50 Cent added. What do you think? Still excited about Relapse?