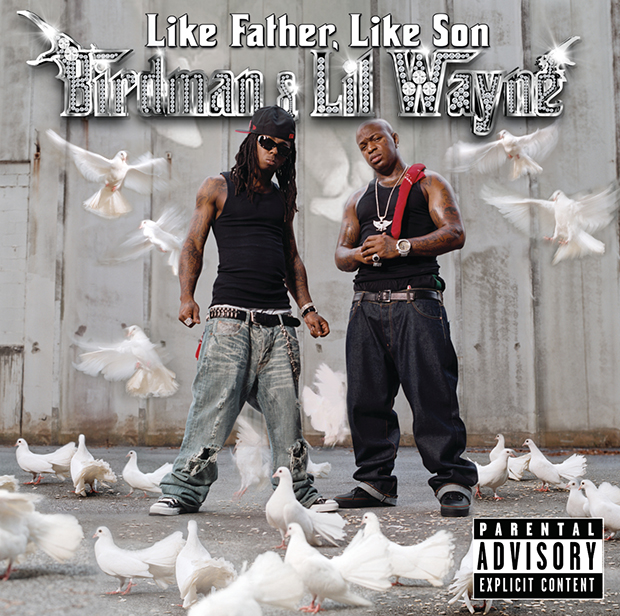 The much anticipated debut from Lil’ Wayne & Birdman finally hit stores. Myself, I’ve been waiting to see that ya boy Wayne can do without any help from his Cash Money brothers. Let’s cut all the chit-chat and get to the review. (Note: Tracks 1, 7, 14, & 20 are skits and are skipped in this review)

OVER HERE HUSTLIN’
What a great way to start the album. Wayne doesn’t let you forget that he is the hottest in the game. Don’t sleep, Birdman is actually spittin’ lyrics (and not game) on this one. The beat is hot, lyrics on point, and that’s how you start an album.

STUNTIN’ LIKE MY DADDY
First single off the album, I have a question though: Name a father/son tandem that stunts more than these two. Best line in the song is “Your bitch on my bike/ she like a crack addict/she saw me cookin eggs/ she thought I was back at it” Woooow! Wayne is that dude.

1st KEY
I love this song, the hook goes: “I got my 1st key from my baby mama brother.” The song has a mellow beat, with Wayne and Birdman rapping and stopping on a dime like Reggie Bush. The guitars and organs are sick on this one. This is a definite download.

LIKE FATHER, LIKE SON
This is the title track off the album. The beat sounds like an old school down South song, which isn’t a bad thing. Birdman again has me wondering where his new found lyrics came from. Weezy F. hits us with another solid effort on this song.

YOU AIN’T KNOW
This is a typical Cash Money song, where they talk about money. It’s not bad, it’s just the production by Scott Storch wasn’t that great. If Wayne wouldn’t have carried this song, it would’ve been a disaster like that hurricane that came N’awlins way.

KNOW WHAT I’M DOIN’ (feat. Rick Ross & T-Pain)
Ya boy Ricky Ross joins our tandem on this one. Ross gives us a typical Ross verse. You know: ”M-I-YaYo, coke, cars, women, and jewelry,” you know Ross. Birdman actually outshined Ross on this one, but Wayne killed it at the end, check this one out.

DON’T DIE
I think the boys are loving their surroundings too much. On this song they recreated Jada’s line: “Gangstas don’t die, they get chubby and move to Miami” for the hook. Press fast forward.

AIN’T WORRIED BOUT SHIT
Not your typical CMR beat, but Wayne rides it like Tony Alva on a turnpike. The hook is garbage, should’ve been different. Oh yeah, Birdman rapping like Baby on this one.

OUT THE POUND
Birdman goes solo on this one. Sounds like a Three Six Mafia beat a little bit. Say what you want, but Stunna holds it down by himself on the track. I don’t think he needed any assistance from Weezy F. on this one. Birdman couldn’t help but ride the beat, the track was vicious.

LEATHER SO SOFT
Wayne’s song about his car or his women, I’ll let you decide. I’m not too sure about this song. This is one of those songs where Wayne starts rambling and gets off topic. Press fast forward.

ARMY GUNZ
This is the standout track on the album. Wayne goes for dolo on this joint. He killed it, showed his lyrical ability with lines like “Y’all niggaz belong in a sorority…ain’t that a bitch!” and this one was my favorite line, “down here you are gonna need a chopper/I’m gone need a lawyer/and you gone need a doctor!” That’s that crack right there. That is my favorite line of the year. They made the hook out of the “Go DJ” song and it fit perfectly. Call me crazy, but I believe this is Weezy’s best song.

GET THAT MONEY
After hearing the beat, I expected more, but was let down. It’s not terrible, but it wouldn’t hurt to press fast forward!

NO MORE (feat. Allstar Cashville Prince)
WARNING WARNING WARNING
Wayne turns into the rambler on this song. The topic is them not going back to the block to hustle. I like the message, but why do I believe they left the block a long time ago.

HIGH
Layed back beat, Wayne come across with a lazy flow. I guess that’s why the name is “High”, cause Weezy sounds like he’s blazed on the track. Baby came out for this one; he hurt the chances of the song making it. If you are a smoker, you might appreciate this one, if not, press fast forward!

CALI DRO (feat. Daz & Kurupt)
Daz & Kurupt drops in to help Birdman and Wayne close out the album. I bet you can’t guess what they’re talking about? Birdman delivers a good verse for y’all; Wayne puts up a solid performance also. Now Daz & Kurupt on the other hand, try to pull off a Jada/Styles back and forth flow. That doesn’t work for everybody, certainly not for them. The song was actually good until The DPG’z screwed it up.

ALL ABOUT THAT (feat. Fat Joe)
Coca Baby and Wayne make a good combo on this joint. Wayne brings his A-game to the party, and he has to, because Joey is flowing nowadays. This song won’t disappoint either fans. I’m loving the rebirth of Fat Joe. You have to check this one out.

Bottom Line:
Overall, this was a good album. Being that it came out in a bad year makes it even better. The production was good on the album and the lyrics were not a letdown. I think we are witnessing the evolution of Weezy. The big issue I had with the album was the abundance of skits. I didn’t even think artists took the time to do those anymore. If they would have cut some of the skits out of the album, it would’ve been better. Wayne made big strides to stake his claim as “Best Rapper Alive.” If you are a fan of Birdman and Weezy, this is a definite cop for you, but if you are browsing the music store (how ever you get your music), this is a solid album that you could buy and won’t feel like you got raped.