Jay-Z – Return Of The Black [Mixtape] 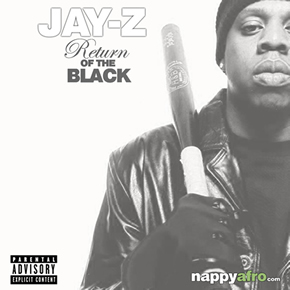 Okay, the cats out of the bag, I’m a big Jay-Z fan. I’m not like some of the dudes I know though. If Jigga farted on the microphone I wouldn’t praise that shit (“Oh shit son, Hova shitted on y’all!”). Yes, Jay-Z has put out some bullshit (“I Know What Girls Like” from In My Lifetime Vol. 1, my boy P-Body always clowns me about that one.). But I still think Jay-Z’s worst shit is sometimes better than most current rappers’ best.

But that’s neither here or there; I’m here to talk about one of my favorite albums by Jay-Z, The Black Album (released November 14, 2003). Now, everybody and their little brother remixed this album (I even wrote a page about this for my college composition class…I got an A). You had The Grey Album to The Pink Album. You had Jay-Z being mixed with the good (Danger Mouse & 9th Wonder), obvious (Nas & Biggie), crazy (Weezer & Spinal Tap), and the weird (Kenny G & Saved By The Bell/The Zack Album). But out of all this, we got some interesting music as well as some producers/DJ’s getting national spotlight (DJ Danger Mouse is the first one that comes to mind.). I read this article in 2004 (Playing God by Andrew Unterberger) where Mr. Unterberger “plays God” and picks out his favorite Black Album remix tracks with original tracks to make the “perfect” Black Album. Now, I always wanted to do this, shit, I did it before reading the article. For over three years I had my own Black Album on my iPod (cover and all), I would like to share that with you.

1. Interlude from 9th Wonder’s Black Is Back
I like this one better that the original because of the bluesy feel. I cut out the Rap City clip of Jay-Z saying good things about 9th Wonder.

2. December 4th from 9th Wonder’s Black Is Back
I never was in love with the original beat. It was good but not good enough, on second thought, it was really good. But when I heard 9th flip “You May Die (intro)” from my favorite Outkast album, ATLiens, it had me. It sounds more autobiographical. Two of my favorites together? Game over.

3. What More Can I Say from Jay-Z’s The Black Album
Can’t mess with the original that’s basically an update of Tracey Lee’s “Keep Your Hands High” featuring B.I.G. Jay rides the beat well on this one.

4. Encore from Jay-Z’s The Black Album
This a Kanye beat at its best. Jay-Z’s swan song…well, I guess not now. I heard a lot of good remixes, just not better than this one.

5. Change Clothes from ?
Okay, this a hard one, I got this one by accident. I was looking for a “Change Clothes” remix but found this song instead. I don’t know the name of the album it’s from nor the producer. I might put up a link to see if anybody knows where it came from. I like it better than the original which ain’t bad at all. But when you heard the first single from this album, wasn’t it a kind of let down?

6. Dirt Off Your Shoulder from Jay-Z’s The Black Album
I ain’t messing with this one either, Timbaland has brothers everywhere bouncing to this one. You remember the line at the end, “Best rapper alive”.

7. Threat from 9th Wonder’s Black Is Back
I’m realizing now how much 9th Wonder I had on here but he did the original too. This version has a Luther Vandross sample “Don’t You Know That” instead. Kinda ironic for this song, that’s what cool about though.

8. Moment Of Clarity from Hasan Insane’s The Pink Album
This is another hard one to figure out because I once again don’t know the name of the producer/remixer at first. I didn’t have a problem with Eminem produced version; the sound is more Shady that Jay-Z. But this remix has a sample (“You don’t have to say a word…”) that gives the song a more somber feel. Plus, the drums on here sound like Kanye too.

9. 99 Problems from Jay-Z’s The Black Album
The original; what can I say? “You crazy for this one Rick!”

11. Justify (Justify My Thug) from Bach Logic & DJ Whoo Kid’s The Red Album
I never really like the original song because it sounds too simple. I know they had other plans for it like the Madonna feature and sample, but still. This one comes all the way from Japan. It sounds like it uses live instruments too. One problem though, Whoo Kid scream on the ong too damn much. I searched high and low for version without him to no avail. You can still tell Bach Logic got some production skills though. Fuck you Whoo Kid.

12. Lucifer from Jay-Z’s The Black Album
I had another one in mind but on second thought, I can’t deny the sample. Kanye was hungry here.

13. Allure from Jay-Z’s S. Carter: The Remix
Once again I feel the Neptunes fuck up another Jay-Z album (check out “Anything” from Kingdom Come for more proof). Just Blaze remixes it here with a soul sample for the much better. It even has a different third verse, which is also cool.

14. My 1st Song from 9th Wonder’s Black Is Back
This has the same beat as the intro which gives the album a bookend feel. The sample feels more retrospective too. The original wasn’t bad; I just felt it was sometimes awkward.

That’s it, thats the album. If you have any questions or info, have your own “perfect” Black Album, or just want to disagree, as always, hits us at nappyafromail@gmail.com (subject line: Return Of The Black). Peace.