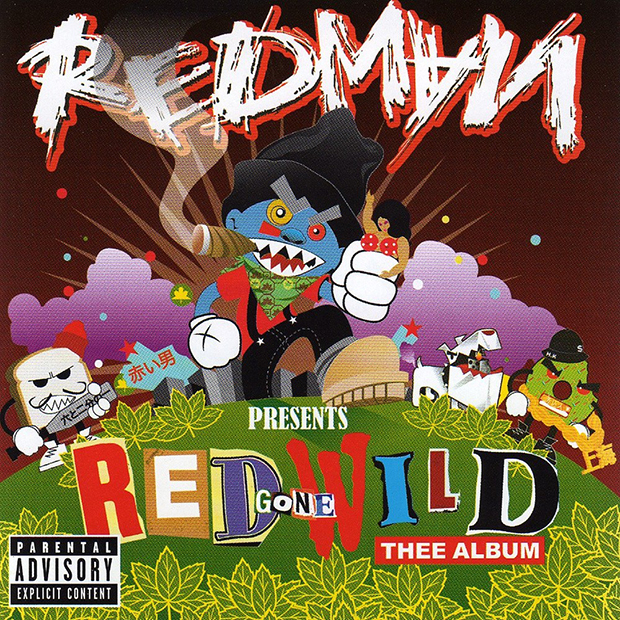 Redman returns six years after relasing his last album, Malpractice. Even though he hasn’t been as visible lately, you gotta remember that his last album debuted at #4 and sold over 500,000 copies. To many, Redman is considered one of the greatest of all time (King Jerm listed him in his Top 10 Mc’s of All Time). In today’s southern and club influenced Hip-Hop, how does Redman’s new album Red Gone Wild (Thee Album) match in today rap music.

The album starts off with “Fire”. Redman shows he still got it as he flows with his trademark ruggedness over a vintage laid back synth driven track with lyrics like: “Getting head on my couch from a chick that resemble Rosie Perez in the mouth.” With “Bak Inda Buildin’”, I guess he needed two intro tracks for the album because this one (as the track before) is only around two minutes. Red still hungry though. On “Put It Down”, I thought Timbaland and Redman together would be interesting, but to me the shit just doesn’t work. I think Redman can be his full self and still make a club track; example: “I’ll Be Dat”. Too bad that this is his first single (I hope he didn’t pay too much for the track.). This is vintage Redman on “Gimmie One”; this track (by Peter Rock) is just for Red to straight spit! With lines like: “If you don’t like me fuck you, I flex one muscle, Doc got more effects that Kung Fu Hustle”. It might not all the way make sense but it’s hot. On “Sumtn 4 Urrbody”, we get introduced (if you haven’t already) to the rappers of Redman’s own Gilla House Records: Blam, Runt Dawg, Ready Roc, Icadon & Saukrates. It basically an average posse records; good line like: “for gwop, I even smack kids like Madea” Rockwilder provides three tracks for the album and for the most part it’s as great a match as Red and Rocwilder ever was. The first, “How U Like Dat” is short but still good. “Hold Dis Blaow!” will delight any Redman fan with lines like: “I ain’t thug, I don’t bulletproof shit!” The third one by Rocwilder, “Merry Jane” featuring Snoop and Nate Dogg doesn’t far well as the other. It’s not trash but how many weed songs do Snoop/Redman have to do in their career? Redman gets with Timbaland’s favorite producer, Scott Storch with “Freestyle Freestyle”. This is not my favorite song but this probably should have been the single. It’s a club song but I think Red had room to be his self. The Def Squad form on the track “Walk In Gutta” (also featuring Biz Markie on the hook). It’s nothing ground breaking but it’s good to hear them together again. Erik Sermon also returns to the boards twice on this album with “Rite Now” and “Soopaman Luva 6 (Part I)” with average results. “Get ‘Em“, featuring Saukrates & Icadon had a “Let’s Get Dirty” feel, but in the end it was an average song. The reggae sounds of “Blow Treez” could have been kept off the album. It’s too bad because this is the only song Method Man is featured on. Songs like “Suicide”, “Wutchoogonnado” & “Dis Iz Brick City” also can be classifies as album filler material. At track 14, “Pimp Nutz” sounded as if you may have already heard it on an earlier track. There weren’t as many skits as previously Redman albums. There were only three but “Mr. Ice Cream Man” (skit) was hilarious. “Gilla House Check” is probably my favorite track on the album. The drums on the track are nice feel that gave Redman room to act a fool with the lyrics: “I run up in your hood like eighty deep, have it sound like drum lines of A&T”. “Soopaman Luva 6 (Part I)” & “Soopaman Luva 6 (Part II)” have Redman doing the story telling thing; which is good because Red mostly just spit on the album.

Bottom Line:
With 23 tracks on this album, those who are not familiar with Redman might find it hard to get into this album. The number of tracks on the album should have been cut down for easier digestion. Plus, the album has a dated feel. To me, there is really nothing that jumps out from the album. While this is by far not his best album, Redman fans will eat this one up.