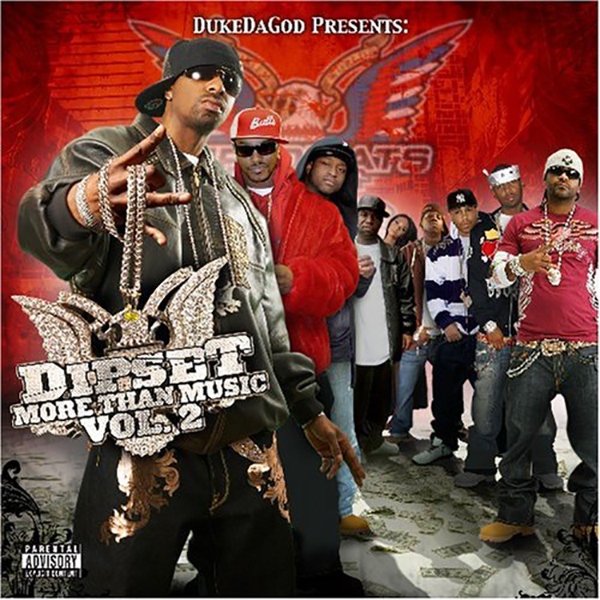 The Dipset crew drops a new album titled More Than Music Vol. 2. While Jim Jones has seen a meteoric rise in the past year, the other guys in the crew haven’t tapped into the mainstream. Some names may not be recognized outside of the mixtape circuit; guys like Hell Rell, Dukedagod, and 40 Cal are trying to bring one home for the team. Can the Dips bench players step up and really make this a movement?

The “Intro” kicks off with Duke talking smack and 40 Cal spittin over a sick beat, 40 bringing the heat on it, good way to start it off. The next cut is “Gladiators” featuring Hell Rell, J.R. Writer, 40, Bezel, and Santana. The production on this song is pretty good. Check it out. “Still More Than Music” follows and the Dips rip the track! Santana spits “I was built for ballin’ like the Staples Center” and “I’m rock and roll like Guns and Roses, the consequences of my guns is roses!” Damn! “Street Pharmacist”is next and it sounds like some bullfighting music! But Hell Rell rips it. You know what it’s about, how Hell Rell is a beast on the block. But it will have the streets buzzing. Jimmy makes an appearance on “Dipset City”. I’m a little upset the beat wasn’t gutter like the other tracks. It seems a bit bubblegum to me, so you know what it is..SKIP! “Suga Duga” is next and the beat sound like Dipset City! This is the first song that Cam is on and he says Soo Woo, but he spits some Curtis aka BOO BOO! How are you going to beef with 50 spittin’ these kinds of rhymes! SKIP! Now“Anniversary”brings that gutter music back and guess what? Jimmy’s on the track! Mel Matrix and Max B accompany Jim on this one, the beat sounds hazy, but Jimmy bought it home. Check it out. A skit is next about some guys trying to stick up Duke, kind of comical. “The Corner” is after that skit, the hook is kind of annoying. The beat is not all that hot, see where I’m going..SKIP! 40 Cal and Jha’Jha jump on the next track “Sometimes”. She, yeah she kind of sounds like Shawna, but she spits some real hood rhymes. The beat is commanding and 40 uses a faster flow, I appreciate showing your versatility, but stick what got you here. Still worth checking out. 40 Cal jumps on the next one by himself. “Getting By” is the tale of how hard it was for me coming up. The beat is okay and 40 puts out a positive song; well that is what he said. Now “Get That Money” is the track I was waiting on with Katt Williams and J.R. Writer. I wondered was Katt rapping or just being a comedian. But I found out he was rapping. He is a funny comedian however, he is a terrible rapper! They wasted a beat on this one. “It’s Over Part 2”follows that experiment. The Dips jump on the piano laced beat. The Dips flourish on beats like this. Check it out. The beat on “The Gun Shop” might be the best one! The boys deliver a solid song that is pretty hot. Fresh out the pen Freekey Zekey jumps on “Feelin Myself” with Hell Rell. Now Rell’s verse was hot, but Freekey didn’t help the cause. But check for Hell Rell on this one. A-Mafia and Tom Gist are featured on “Show & Tell”, the hook mentions, “I know the streets and I know them well, I brought a triple beam to my show & tell.” The track is basic, but it sounds good.

Bottom Line:
Overall this album was pretty good. It had some slip-ups, but it did have some good moments. This will surely keep their fan base happy until the next offering. But it also shined some light onto the other members of the crew that nobody knew even existed. With an album that barely featured Cam , Jimmy, or Santana, the bench players definitely put in some heavy minutes.