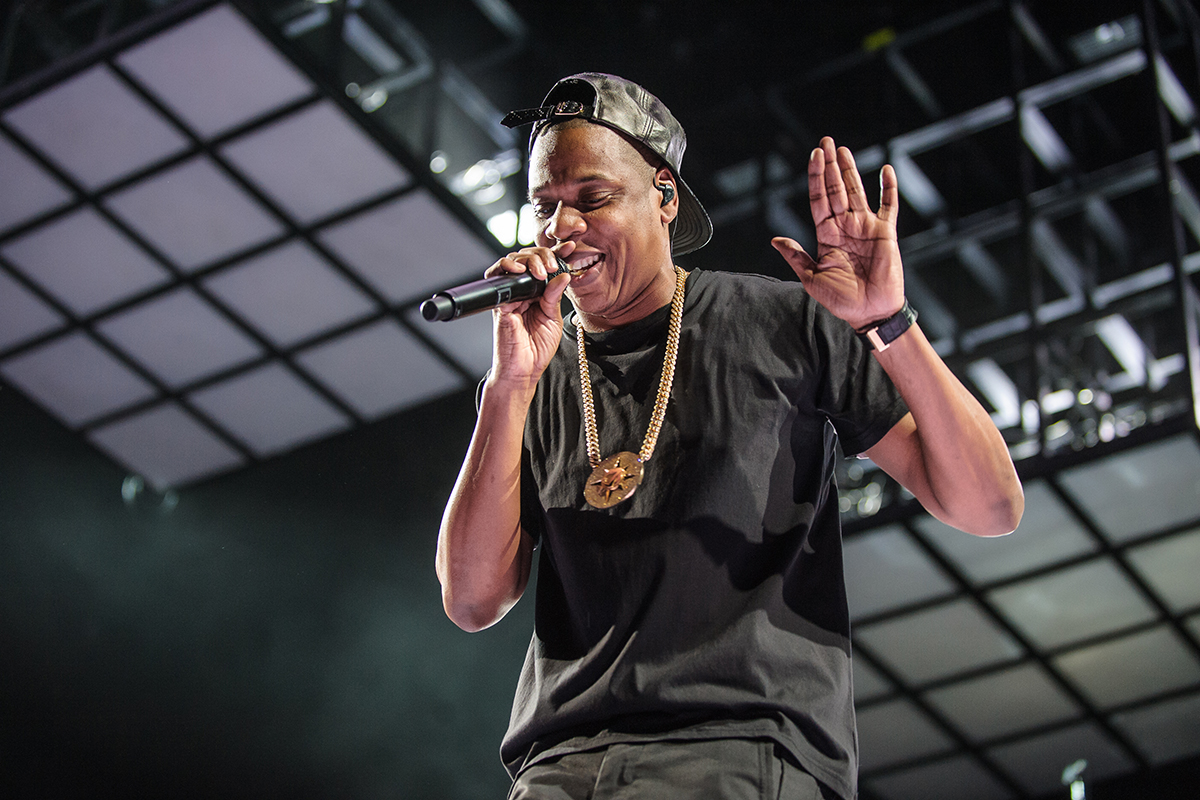 Did anybody think this wasn’t gonna happen? There was no way that B-Easy (me) was gonna let Jay-Z drop an album and not review it. On nappyafro. Even if it’s three months late.

So since I’m super late to the party with doing this review (Especially in Hip-Hop time), what can I really say that hasn’t been said about Jay-Z’s 13th studio album, 4:44? Well, I already said on Twitter that this album might be the best old nigga Hip-Hop album ever. And as an old nigga myself, that’s a huge compliment. Yeah, I’m not gonna bore you with all the behind the scene details on an album that came out in June. Young Dick Gregory AKA your resident nappyafro Jay-Z stan is back. Let’s get into it. Here’s my late ass review for Jay-Z’s 4:44.

1. Kill Jay Z
Produced by No I.D.
If you are a sucker for small details like myself, you’ll notice that Jay-Z put the hyphen back in his name for this album (He still has it all capitalized but I don’t acknowledge that shit). Jigga took away the hyphen around the time Magna Crata Holy Grail dropped for a reason I’m not sure of. So with that knowledge, the title “Kill Jay Z” says a lot; Jay-Z is letting go, or killing, the old Jay Z and more specifically the ego of the old Jay Z.

Lyrics wise, Jay covers everything from shooting his own brother to egging on Solange during the now infamous elevator incident to possibly even losing Beyoncé (“Never go Eric Benét!”). This makes a good opener for the album and lets the listener immediately know this project isn’t pulling punches on the life and times of Shawn Carter.

Production wise, No I.D., who basically produced the whole album, provided a soulful sample beat. It’s actually an awkward but clever use of The Alan Parsons Project’s “Don’t Let It Show”. I think the awkwardness was on purpose and represents the inner conflict within Jay-Z/Jay Z.

There is an accompanying music video for “Kill Jay Z”, and while it’s okay, the visual that come to mind when listening to this song is that image of Jay-Z getting shot at the end of “99 Problems”.

2. The Story of O.J.
Produced by No I.D. & Jay-Z
I remember watching O.J.: Made in America last year and thinking what a complex individual O. J. Simpson was and I guess still is. I also came to conclusion that O. J. was an asshole.

“The Story of O.J.” uses O. J. Simpson’s strain relationship with the Black community as way not to be when you get rich or get to a level of celebrity (“O.J. like, “I’m not black, I’m O.J.” …okay”). Jigga is just dropping financial game all over this song and that’s refreshing coming from a rapper, a 47 year old rapper yeah, but still a rapper.

This is the first song I heard off 4:44 and as soon as I heard that first line (“Light nigga, dark nigga, faux nigga…”), I immediately knew Jay-z had something.

Jay-Z gets the production credit for picking the Nina Simone’s “Four Women” to sample, and No I.D. gets it for placing everything in the right place. The original song does most of the heavy lifting, but a win is a win.

The music video for “The Story of O.J.” is one of the best of the year. And yet, it’s not even the best music video associated for this album. But we’ll get to that later.

3. Smile
Featuring Gloria Carter; Produced by No I.D. & Jay-Z
Stevie Wonder’s “Love’s in Need of Love Today” being the anchor on “Smile” gives the whole song a “back in the day” vibe. Jay-Z reminisces and goes with the it but still makes sure you understand his achievements:

Far as draft picks, my name did not get called
Bet before I go I put a billion on the board
Hall of Fame Hov, I did it all without a pen
Y’all knew that was comin’, I had to remind y’all again, huh?

But the biggest thing to come out of “Smile” is Jay’s mother coming out publicly as homosexual. This happens in the form of lyrics in the first verse (“Mama had four kids, but she’s a lesbian”) and a spoken word poem by Gloria herself at the end of the song. As monumental as this moment is for Gloria Carter, it also shows that Hip-Hop can still continue to evolve and grow up.

4. Caught Their Eyes
Featuring Frank Ocean; Produced by No I.D. & Jay-Z
I just realized that Jay-Z and Frank Ocean have done five songs together at this point (That unfortunately includes Hov’s verse on “Biking”). On “Caught Their Eyes”, No. I.D. & Jay-Z go back to the Nina Simone well and samples her song “Baltimore”. It works for the most part. Sometimes, especially on this track and previous one, it feels like Jay runs out of space with fitting his lyrics to the music (It’s very slight but whatever).

As for Frank’s contribution, when I first heard it I thought it was a sample, and that’s kinda cool. His vocals also mesh well with the Nina Simone vocal sample. Speaking of singers, there’s this Jay-Z lyric:

I sat down with Prince, eye to eye
He told me his wishes before he died
Now, Londell McMillan, he must be color blind
They only see green from them purple eyes

I was wondering was this a real thing that happened then I remember that Tidal was in fact the exclusive streaming service to listen to Prince’s music when he passed in 2016. While that’s no longer the case, Jay-Z and Prince talking is a conversation I would have loved to hear.

5. 4:44
Produced by No I.D.
First off, props to No I.D. for the beat and I guess to a larger extent, props to Hannah Williams and The Affirmations for making “Late Nights and Heartbreak” (The song sampled on “4:44”). Like most people, when I initially heard “4:44” I just assumed that it sampled an old forgotten soulful track nobody remembers, not a song from 2016. Good work all around.

Remember when it was a rumor that Jay-Z would released an album that would be the answer to Beyoncé’s Lemonade? Thankfully, that’s didn’t exactly happen like that, but this song is definitely an answer and apology to Queen B’s sixth studio album.

As somebody who has been a Jay-Z fan since Reasonable Doubt, it’s still crazy to hear him be so open. On “4:44” everything is laid out: Him being unfaithful, Beyoncé having multiple miscarriages, how they met and how they eventually drifted away. It’s all here and it’s probably his most honest song to date (And he’s made songs about selling crack to mothers).

6. Family Feud
Featuring Beyoncé; Produced by No I.D.
“Family Feud” is easily the best song on the album. Besides the quality production making expert use of The Clark Sisters and a well placed cameo from Beyoncé, a song about the separation between old heads and youngsters (Specifically in Hip-Hop) seems truly relevant today.

Jay-Z also sounds at home on “Family Feud” from the way he’s in pocket over the beat, to him cracking jokes on the hook, to him saying “I’ll be damned if I drink some Belvedere while Puff got CÎROC” on the way out. This is the fully formed version of Hova that can talk about his drug dealing past while giving props to his wife while telling his community to buy from Black-owned businesses. I like that mixture a lot.

What’s better than one billionaire? Two.

7. Bam
Featuring Damian Marley; Produced by No I.D.
I’ll admit, at first I didn’t like “Bam” that much. This was mainly because it samples Sister Nancy’s “Bam Bam”, a song that has been sampled to death in the past.

The thing that changed my mind was seeing the music video for “Bam”. Secondly, Jigga was kinda spitting here:

8. Moonlight
Produced by No I.D. & Jay-Z
“Moonlight” is another track that had to grow on me (Which happens when you review an album that you have been listening to for three months). At first I wasn’t with the laid back flow that Jay-Z’s used here, but it goes with the beat (That samples “Fu-Gee-La” by the way).

The meaning behind the song is all there in the hook:

We stuck in La La Land
Even when we win, we gon’ lose

It gives a nod to what happened when Moonlight won an Oscar for Best Picture in 2016 while also saying that when Black people as a whole win or reach another level, we still lose.

Also, you remember earlier in the review when I said that the music video for “The Story of O.J.” is one of the best of the year, but not the best on this album? The music video, if you can call it that, for “Moonlight” is the best music video on 4:44. I’m not even gonna speak on it here, but if for some crazy reason your reading this and you haven’t seen it, go check it out now.

9. Marcy Me
Produced by No I.D.
Jay-Z takes it back to Marcy Housing Projects on Track 9. While it feels like “Marcy Me” plays the role of a strictly album cut on 4:44, it’s still a good song. The piano driven tracks gives Jigga room to recall simpler times when Jam Master Jay was alive and “Lisa Bonet was Beyoncé of her day”. Like I said, this track is not the headliner but it’s worth a listen.

10. Legacy
Produced by No I.D. & Jay-Z
Over a sample of Donny Hathaway’s soulful “Someday We’ll All Be Free”, Hova talks about the legacy of his family name as well as the legacy of Black people as a whole. It makes sense that this ends the album as this song is basically what would play over the ending credits if 4:44 was a movie. It even has Blue Ivy asking what a will is at the beginning of the song. The horns rightfully end Jay-Z’s 13th album.

I said it at the beginning of this review, and I’ll say it again now: With 4:44, Jay-Z made the quintessential old nigga Hip-Hop album. And that’s a beautiful thing. For so long in Hip-Hop we have worried about the age of rappers, but at almost age 50, Hova showed that there may be no retirement age for some rappers. Not only that, but 4:44 is his best solo project since The Black Album in 2003. If you are a rapper over the age of 35, you need to thank Jay-Z. Hip-Hop finally grew up.

Update: The classic rating felt like a career achievement award. Jay-Z is classic but this album is not. Change the rating to a 4 out of 5 (Which seems more appropriate for an album titled 4;44)