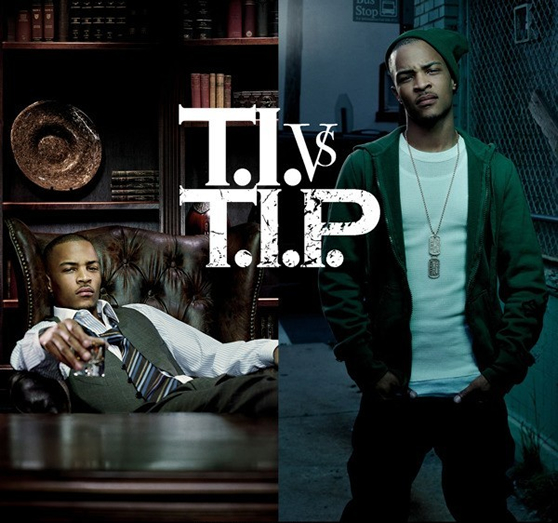 People can say a lot of things about T.I., one thing they can’t say is that he hasn’t showed growth. When he debuted to the public along side Beanie Sigel on the Shaft soundtrack (“2 Glock 9’s”), he could’ve phased away as another face in the crowd. Then came his slept on debut, I’m Serious. At that time, if I was to put money on whether who would do better: Killer Mike, Youngbloodz, or T.I., I would’ve lost that bet. Over the next three albums we all saw T.I. mature. Gone were the glasses and the alienating southern style. Now he wore contacts, added acting to his resume, and worked with producers such as Just Blaze and Swizz Beatz to give him a broader appeal. After last year’s King lead all rap sales (the only one to go platinum), T.I. returns with T.I. vs. T.I.P. to prove he can do it again and possibly be “the man to save Hip-Hop” (we’ll get to that later).

1. Act I (T.I.P.)
Produced by T.I., Kannon “Caviar”, & Just Blaze
If you already haven’t heard or guess it, this is a concept album with T.I.’s different personas: T.I. (Commercial) and T.I.P. (Street) splitting the album in half and rapping on their own. The album starts out with T.I.P.’s half. The intro has T.I.P. channel surfing and seeing all his (or T.I.’s) success and stumbles. T.I.P. then rap and lets it be know that he didn’t sign up for the bullshit. A funny part in the song is hearing Lyor Cohen over the phone cussing out T.I.P. about the lateness of the album. Nice flow over a good beat provided by Just Blaze.

2. Big Shit Poppin’ (Do It)
Produced by Mannie Fresh
T.I. links up Mannie Fresh for the first single. Actually him and Fresh are becoming a formidable duo. It’s a serviceable single; somewhere between “What You Know” and “Top Back”.

3. Raw
Produced by Lil’ C
Here T.I.P. tells the fakers about their lack of rawness. So far, I’m still up in ther air about the whole split personality concept. On this song he brags about his money and I’m having a hard time trying to figure out which one flosses. Do both of them floss? Average song.

4. You Know What It Is
Featuring Wyclef Jean; Produced by Wyclef Jean, Jerry “Wonder” Duplessis, Sedeck “All Hands On Deck” Jean, & Keith “Lil’ Wonda” Duplessis
I guess the T.I.P. side enjoyed the Fugee album a lot too. The Wyclef collaboration had me puzzled but in a strange way it works. The beat is club ready but yet street. The hook shows T.I.’s ability to create infectious hooks.

5. Da Dopeman
Produced by Mannie Fresh
I heard this song every time I rode through the hood this past week. Mannie Fresh returns and they deliver the hood banger for the album. T.I. goes through the ups and downs of drug dealing. The songs reminds me of Ice-T’s “High Rollers” because the ending is real; dopeman = jail or death.

6. Watch What You Say to Me
Featuring Jay-Z; Produced by Khao, Bao Quoc Pham, & Steve Holdren
I already kinda covered this song here. After the comparisons (Pharrell once called T.I. the Jay-Z of the South) and almost callabos (“Bring ‘Em Out”), this song is underwhelming. Both show up but just barely. The beat doesn’t help matters either. Listen to Hov’s verse and tell me if he’s really getting at Lil’ Wayne.

7. Hurt
Featuring Alfa Mega & Busta Rhymes; Produced by Danja
On this one, T.I.P. continues the usuals; “Pussy niggas” and “Haters out to kill him”. The beat is southern standard. Alfa Mega and Busta Rhymes both turn in first rate performances. Good.

8. Act II (T.I.)
Produced by T.I., Kannon “Caviar” Cross, Corey “DZ” Simon, & Just Blaze
Now it’s T.I. turn. T.I. wakes up and doesn’t remember what T.I.P. did on some Fight Club shit. This also has the same beat as the first skit. It moves the album concept along.

9. Help Is Coming
Produced by Just Blaze & Canei Finch
T.I. and Just Blaze hook up once again on this one. Hold up. Did T.I. just say that he was going to save Hip-Hop? That’s modest. If Jay-Z and Nas couldn’t do I last year, what makes T.I. think he can do it? If you liked “King Back”, it’s a good chance you might like this one. The jury is still out on the hook.

10. My Swag
Featuring Wyclef Jean; Produced by Wyclef Jean, Jerry “Wonder” Duplessis, Sedeck “All Hands On Deck” Jean, & Keith “Lil’ Wonda” Duplessis
Wyclef returns to link up with the T.I. side. Uh, he might’ve needed to stop with the first track. This sounds like something that could go on a Wyclef album. Skip!

11. We Do This
Produced by The Runners
I’m starting to realize that the T.I. shit is trying to hard to be commercial. The Runners provide the beat. As the song played it grew on me. The drums on this one are hot.

12. Show It to Me
Featuring Nelly; Produced by Tony Galvin
Why do rappers still do songs with Nelly; don’t they understand that he is past his prime? The beat sounds like it’s all live instrumentation. The beat is okay but the beat and Nelly’s verse should of been left on the cutting room floor.

13. Don’t You Wanna Be High
Produced by The Runners
The Runners make a quick return from track eleven. This also has the feel of the last track too. It’s a song with a summer/tropical feel. Its okay but I think it tries to hard to be radio.

14. Touchdown
Featuring Eminem; Produced by Eminem & Jeff Bass
Years ago, did you think Eminem would have been on the T.I. side of the album? Hope T.I. didn’t pay too much for this track because Shady gave him a sub par beat. T.I. shows up for the track but Em’s verse is on some pop shit. Not the worst song, but a disappointment.

15. Act III: T.I. vs T.I.P. The Confrontation (T.I. vs T.I.P.)
Produced by T.I., Kannon “Caviar” Cross, Corey “DZ” Simon, & Just Blaze
T.I and T.I.P. meet up and do what I thought had already had been done on Trap Muzik. No rapping over the same beat for Act 1 and Act II. It still moves the flow of the album; actually it’s well thought out.

16. Tell ‘Em I Said That
Produced by Danja
I guess both personalities rap together on the remainder of the album. This is actually a good quality song about not listening to fake rappers lying about their criminal past. T.I. (or T.I.P.) breaks down how your favorite rappers are probably fake. Nice song.

17. Respect This Hustle
Produced by Danja
I honestly thought this was Grand Hustle posse song; but no. By the way, Where are Kuntry, Dro, or Drama? The beat is okay but once again, the hook is suspect. Other than that, it’s your standard T.I. Worth checking out.

18. My Type
Produced by Keith Mack
This is T.I. at his best. I always thought what separate T.I. from Lil’ Wayne and the other South elite, is his ability to write good songs. T.I. tells the world that when he dies, their will never be another like him. A good way to end the album.

Bottom Line:
Even though this isn’t T.I.’s best album, it’s still a strong effort. He came with a concept album that is scarce in the current rap landscape. Long time fans might feel T.I. moving away from Trap Muzik or I’m Serious and more towards King or Urban Legend. But for a fifth album, this proves T.I. still holds the crown.