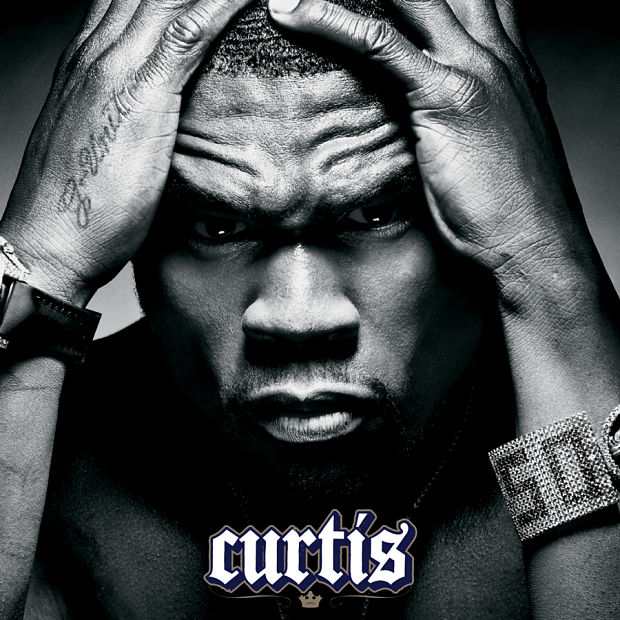 After having two of the best selling Hip-Hop albums of all-time, 50 Cent returns with his latest album Curtis. After sitting back watching the decline of the once mighty G-Unit, the General steps up to restore the stronghold the crew once had in Hip-Hop. Even with the five singles the buzz was not how 50 liked it, but in a tough climate you have to do what you have to do. 50 said that the crunch wouldn’t affect him, but we will see if he’ll put up Bonds’ like numbers in the first week like he’s used to.

The albums “Intro” is kind of weird with some guys with an English accent talking, nothing major, just an intro (from the movie Shooters). “My Gun Go Off” is next and 50’s talking greasy on this one, this is the 50 that everybody loves. Hard rhymes and a hard beat is a winner every time. “Man Down” is next and the first thing you notice on this song is that it is censored. What! The song is a banger if you can get by the muted vocals. Akon makes an appearance on “I’ll Still Kill”, with some killer production by DJ Khalil. 50 Cent is back to his old self, thuggery, which his fans love. The song is pretty tight, so check it out. Next up is the club banger “I Get Money”, and you know this is the song of the summer. CERTIFIED BANGER! Next up is the Dr. Dre produced “Come & Go”, and for some reason, it doesn’t sound like Dre, but maybe he’s trying something new. The song is nice, something to say to the groupies and birds! “Ayo Technology” featuring Justin Timberlake and Timbaland, I’m not a big fan of this one. Timbo has spent too much time in England, his music sounds too techno. 50 kicks his flow with some tempo, not a bad song, I just don’t like it. “Follow My Lead” featuring Robin Thicke is next up, and from the drop I love the smooth beat. This is one that the thugs can sing to their ladies. BANGER! “Movin’ On Up” is the next song, and the production is sick on this one. 50 sounds like the Power of a Dollar 50 Cent on this one. BANG THIS ONE! “Straight to the Bank” follows and you have heard this one. The beat isn’t that hot on this, but it got some spins on the radio. “Amusement Park” is next, and the hook is infectious, “Shorty you ain’t got to pull your panties off, just pull them to the side!” I couldn’t have put it any better! This is like the fourth track that he aimed at the ladies, but this one is hot too! Havoc produced the next one, “Fully Loaded Clip” with the comical hook. “While Jay and Beyonce was (kissing sound) kissing, I was cooking 1000 grams in the kitchen, while Nas was telling Kelis I love you boo, I was shining my nine you know how I do.” This was supposed to be the song that caused a stink to drop an album, but no one took the bait. Eminem produced and appeared on “Peep Show”, and honestly this is the first dud on the album…SKIP! When will rappers stop letting Eminem ruin songs on their albums. “Fire” is next and Young Buck shows up on this one. The beat is different, again not you typical Dre track. The hook is annoying, resulting in another dud! “The Queen” Mary J. Blige sings on the next one, “All of Me”, and the beat is GANGSTA! You can’t go wrong with Mary J. singing on the hook, and 50 puts up some nice bars on this one…BANGER! Havoc produced another one titled “Curtis 187″, and it sounds like a Mobb Deep track, but 50 did his thing on this one. “Ya’ll know Boo Boo gets busy”; his words not mine! “Touch the Sky” is the last song and Tony Yayo joins in on the fun. The beat is nasty on this one, and 50’s talking that talk again, but Yayo puts out an impressive sixteen. He didn’t get the short end of the stick, he held his own! Check this one out!

Bottom Line:
This album showed what we already knew, 50 Cent is versatile. He not only goes back to his “hardcore” roots, but he also makes songs for the clubs, ladies, and some of his older fans. This album doesn’t have the impact of Get Rich, but it isn’t boring like The Massacre. 50 didn’t disappoint on this one, his fans should like this one, and even people that aren’t fans (like me) can find something they like on this one.

nappy Picks: Go buy the album, this is 50 Cent!