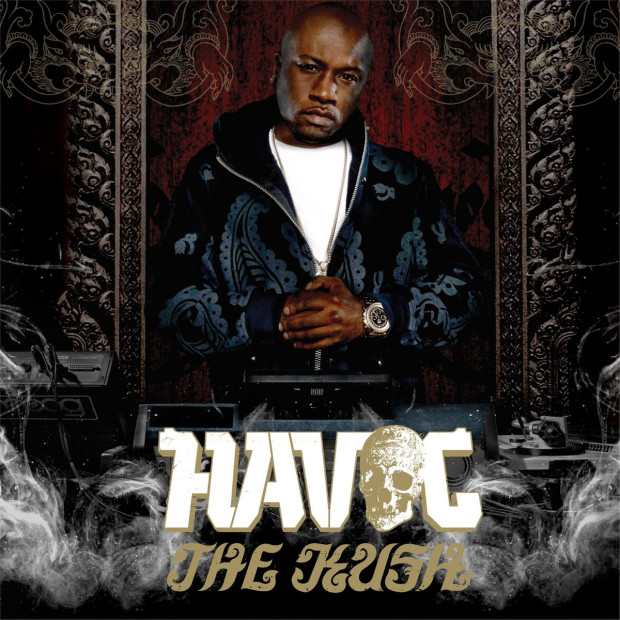 Havoc, one half of the duo Mobb Deep, releases his debut album titled The Kush. After hitting the national scene in 1995 with The Infamous, Havoc never grasped the limelight like his partner in rhyme Prodigy. Things have changed since then, they left Loud Records, went to Jive, left there went to G-Unit. Since he produced most of the Mobb hits, Havoc shouldn’t have any problems finding beats for his album.

The album starts off with “NY 4 Life”, and instantly you hear Havoc’s infamous sound. Dark, dreary, NY sounding beats coming through the speakers. The song is on the boring side, not the way to set if off. The lead single “I’m the Boss” is next up, and the darkness is still present, but this time Havoc adds some tempo to it to make it “two step-able”. 40 Glocc makes an appearance on “By My Side”. This song is homage to his pistol, but Havoc loses me on the flow. He just rambles on about nothing. Wasted a good track on this record…SKIP! The next track is titled “One Less Nigga” and may I reiterate that Havoc is not one of the best lyricists out there. This track is totally boring, and the subject matter is redundant. Moving on to the next track “Ride Out” and the beat is hot on this one, but the rhymes are overshadowed by the production, and the hook is on the suspect side. The first up tempo song on the album is “Balling Out“, featuring Un Pachino. The beat is tolerable and so are the rhymes. “What’s Poppin’ Tonite” is next and this track has too much going on in the background. All of the Justice League sound effects send you to another galaxy. “Class By Myself” follows and the beat on this one is pretty tight! Havoc lyrics go with the beat on this one. Check for this one! Prodigy makes a well needed appearance on “Set Me Free”. Finally, this is what this album needed, Havoc and Prodigy together on the same track. Havoc feeds off Prodigy to put together a nice song. Havoc fires back with “Be There”, a song where he questions will his crew be there when things fall apart. Nice subject matter, nice production, equals nice song. “Hit Me Up” is on deck, and Havoc switches the production up with some drums, sounds crowded, but the song is decent. “Get Off My Dick” is the last track on the album, and the production is nice on this one. Havoc puts together some nice lyrics on this one…CHECK IT OUT!

Bottom Line:
This album was relatively short, (39 minutes) but the missing link to this was Prodigy. Havoc can’t carry an album by himself. The only song that Prodigy appeared on was pretty tight. Their styles compliment each other, so without each other they don’t sound that well. Credit goes out to Havoc for putting out an album, but stick to making good music with the Mobb. Leave the solo joints to Prodigy. He doesn’t have the subject matter to rhyme alone. This shows you that Havoc is a better producer than solo MC.