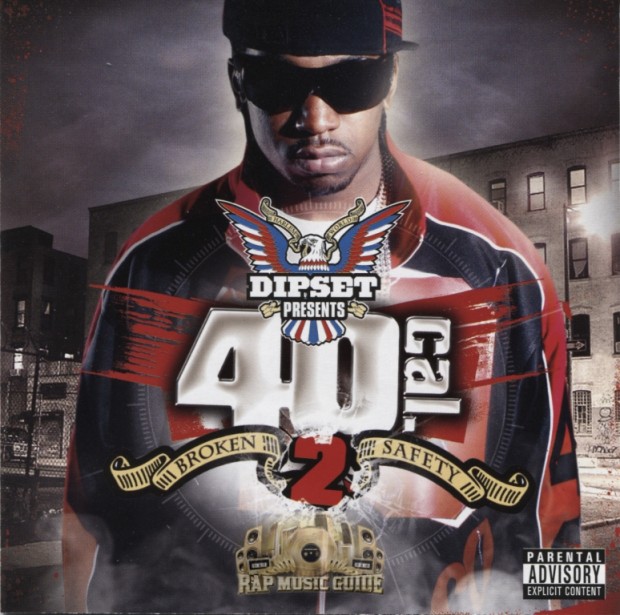 It wasn’t until I got this assignment to review 40 Cal.’s new album, Broken Safety 2, that I realized that we already reviewed four Diplomats’ albums this year (three actually released in 2007). Then you throw in that we didn’t review every Dipset related album released this year and you see that they put out a few albums this year. Looking back on it, I really didn’t like any of them (Okay, I like Jimmy’s last album a little). I’m not a Dipset hater or anything, I just feel like all their shit is starting to run together. So you can understand why I was a little less than excited to review 40 Cal.’s new joint. I mean, dude is on the Diplomats “B-Team” along with Hell Rell, J.R. Writer, Freekey, and a host of other members I can’t remember. But I do know a little about 40; he’s a Fight Klub veteran, probably the best freestyler of his crew, calls himself “Mr. Rewind That”, has appeared on several Diplomat albums and mixtapes, and release his first album Broken Safety last year. The one thing that is funny about Broken Safety 2 is that 40 Cal. had the balls to release it on 9/11 this year along with Kanye and 50. Let’s see if 40’s album makes me upset I didn’t let King Jerm have this review.

The album starts out with “40 Cals”; it’s kinda like Jay-Z’s “22 Two’s” (40 Cal. Says the word “Cal” forty times). Not that original but he throw in some okay bars in there; “Why these juniors after my name like Cal Ripken?”. The next song “Dip-Dip” features Juelz Santana and it has the usual hook; “It’s that Dip-Dip, nigga what’s good?”. How long are they gonna use Dip-Dip in their hooks? Unless your a Juelz fan (Who barely shows up here), there’s nothing special here. “Celebrity Hustla” continues the use of the Dipset sound; you know, the one Cam started on Come Home With Me but the crew can’t let go, yeah that one. Besides that, the song is about selling drugs to celebrities; he even gives a shout out to Todd Bridges and “dude from the Cosby Show”. Hell Rell shows up on “Hostile Takeover”. For some reason, I never minded Hell Rell. Not to say I’m buying he upcoming album or anything. The song here is basic though, not a terrible song; if you listened to Diplomats a lot, I’m sure heard something like this before. The first single off the album, “The Big Boys” featuring Dipset girl member Jha Jha is up next. It seems to me like 40 really tried to get some radio play here when I hear the Southern sounding beat and hook (Well Jha Jha does the hook, and she is from Opa Locka). Nothing different here; your basic “I got money and a nice car so fuck me girl” stuff. Okay I’m five songs in and I’ve already wanted to skip four songs. Okay, back to the review. “Drama Season” is another tough talking song from 40; “Last Christmas I went to war with Santa Claus”. Okay. Former Roc-A_Fella artist Rell shows up to sing the hook on “Hi-Road”. At least this one had a slower beat to change it up a little. But do you really wanted to hear about taking the high road from a guy name 40 Cal.? “Since U Been Away” is another song with even more gun talk and drug dealing and at this point all the songs are really starting to sound alike. I did hear one semi-clever like line though; “Snuff ‘em in his jib so he chain hang low, make it easy to grab when that thang thang blow”. “Getting By” is your basic “how I used to be poor” song but at least he talks about something other than being hard. The flow gets monotonous but maybe I shouldn’t be complaining. “Give Me Some Head” is about, uh, 40 telling girls to give him some head. It reminds me of Lil’ Kim’s “We Don’t Need It” with the back and forth on the hook. I actually didn’t hate the beat and it’s sad to say that this is probably one of the better songs on the album. “Close Ur Eyes” is even better than the last track. It has a Mary J. Blige sounding sample and is actually well put together. On “Stick ‘Em”, Cam’ron and J.R. Write show up and it’s your standard Dipset group song. This also showed me that Cam is gradually losing any chance to go back to the way he was; I don’t think he really cares anymore. Remember when I said that Dipset uses Dip-Dip in their hooks? Cal does it again on “New Anthem”. At this point…Skip! “Neva, Neva” is up next and features A-Mafia and Ru Spits. I could’ve sworn I heard this already on this album. This review is going too long…Skip! On “Dead Poets Society” Cal finally shows some creativity by using the flow of deceased rappers such as Big L, Pun, Biggie, and Pac. It’s not that well executed but I give him points for trying. The last song on the album (finally!), is “Chickens In Da’ Coupe”. This song is funny for two reasons; it starts off using a changed up version of “Chicken Noodle Soup’s” hook; “I got chickens in the coup, chickens in the coup, chickens in the coup, Range Rover on the side”. The other funny thing is that I didn’t hate it. It uses a simple beat and it’s a change from the cluttered feel of the rest of the album.

Bottom Line:
Was it a mistake to release 40 Cal.’s album the same day as Kanye’s and 50’s albums? Of course. Was it a mistake to release this album at all? Yes, 40 is not ready to carry his own album (especially a 17 song album), but yet here he is on his second one. While he isn’t talentless, he doesn’t have enough identity or personality to be a viable solo artist. This album offers nothing new in a rap game that is already becoming generic. I’m sure Broken Safety 2 will brick and be lost in the shuffle just like the first one.