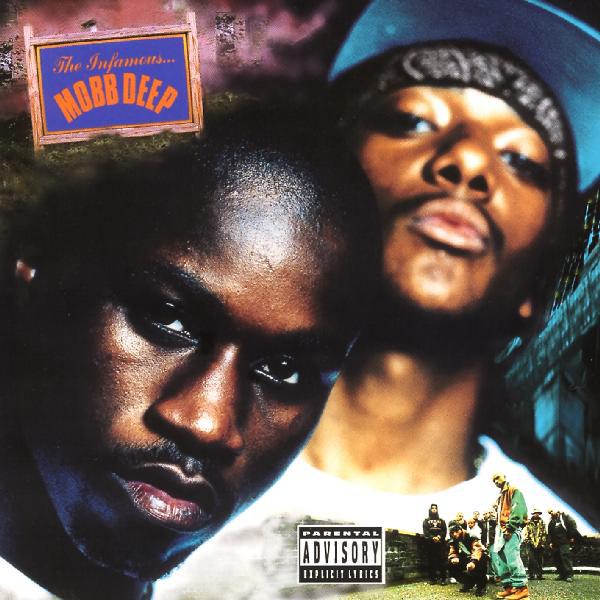 Just as H2O mentioned in his Classic Material write up for De La Soul’s classic De La Soul Is Dead album in that no De La Soul album had been previously selected for the column, the same can be said about Mobb Deep. Searching back from the start of the Classic Material column, no Mobb Deep albums are to be found and a column as prestige wouldn’t be complete without at least one. That’s where Mobb Deep’s second album The Infamous comes into play and fits perfectly among the previously selected albums. 1995 in the Hip-Hop world featured a lot of classic album releases (Liquid Swords, Return Of The 36 Chambers: The Dirty Version, Livestylez Ov Da Poor And Dangerous, Only Built For Cuban Linx, Doe Or Die…) and this album can be included in that listing.

The public knew little about the duo of Havoc and Prodigy from Queens after their debut album Juvenile Hell was released two years earlier in 1993, but that would all change after the second album release. What was minimally achieved on their debut album would be the strongest point of their second album, and that was Havoc and Prodigy giving the listener a vivid portrayal and description of their dwelling in Queens. A dark and sinister mood is provided with tracks “Shook Ones, Pt. II”, “Survival Of The Fittest”, and “Eye For An Eye (Your Beef Is Mines)” that take you into the depths of the street life and its daily operations filled with drugs, violence, and ultimately survival. Other than Wu-Tang Clan’s Enter The Wu-Tang (36 Chambers) released two years prior, no other album was delivered with such a dark theme and presence about it.

Throughout the album Mobb Deep deliver lyrics spanning a range of topics such as prison (“Up North Trip”), setup (“Trife Life”), fake gangsters/crooks (“Shook Ones, Pt. II”), drinking (“Drink The Pain Away”), and survival (“Survival Of The Fittest”). The songs on this album flow smoothly from one to the next because of the unified production provided by producers Havoc and Q-Tip. As mention previously pertaining to Common’s Resurrection album, it’s this type of unity in both the production and lyrics that allows the album to fit together so precise. This is one major aspect that is missing from a lot of Hip-Hop/Rap albums released nowadays and is really only achieved by working with only one or two producers throughout the entire project. This album can be acknowledged for producing one of the greatest songs in Hip-Hop history in terms of “Shook Ones, Pt. II”. From the subtle instrumental build up at the start of this song it is instantly recognized and Mobb Deep’s lyrics make it complete (it’s no wonder Eminem selected this track for the final freestyle battle scene in 8 Mile). You can be the most humble person in the world, but there’s no denying that the menacing piano keys and pounding drums will stir up feelings of aggression and anger while listening.

For the most part that is what makes this album such a classic 14 years later and why it hasn’t been duplicated by Mobb Deep five album releases later. With this album Mobb Deep brought you into their world and introduced you to their way of living. If you never lived and/or grew up in the hood you got a taste and feeling of the life just from listening to this album, and if you did you were just able to relate with this album and its content even more. Ultimately The Infamous expounded upon Nas’ lyrical storytelling and vivid depictions on Illmatic and presented you with the 41st Side version (read: dark/gritty) of Queens that wasn’t seen with its pioneers Marley Marl, MC Shan, and others.