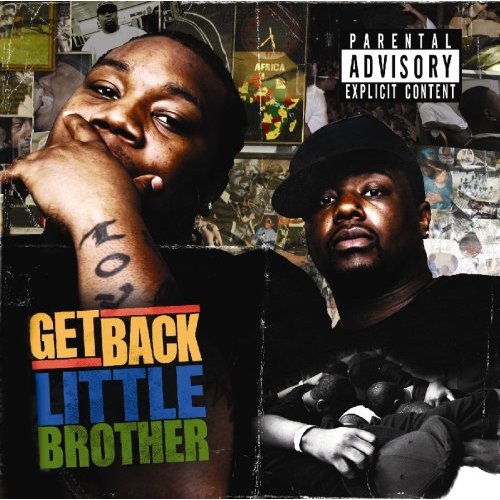 Little Brother returns with their third album titled Getback, this one without in-house producer 9th Wonder. The group and the producer parted ways, but Phonte and Rapper Big Pooh decided the show had to go on, so forward they went. Little Brother, the collective from North Carolina, met up at NCCU in 1998 but their official debut was in 2001. After killing the mixtape circuit over the past year and a half, with DJ Drama on Seperate But Equal and Mick Boogie’s And Justus For All, heads have been craving another studio album. The departure of 9th could prove costly, but then again it might be a blessing in disguise.

The album starts off with “Sirens” and immediately Pooh and Phonte attack the beat provided by Illmind, and already you feel the frustration they have with the industry. After the song is a snippet from The Wire; good choice! Next up is “Can’t Win For Losing” once again featuring production from Illmind, and this one is even sicker than the last one. Again Pooh and Tay commit verbal assault on the beat, talking about no matter what they do, they don’t come out on top. Keep this up, and we will have a classic LP on our hands! Lil’ Wayne makes an appearance on “Breakin’ My Heart”, produced by 9th Wonder. Wow! This has to be the best beat that 9th has ever done! Surprisingly LB meshes well with Wayne. I wondered how Wayne would perform with real MC’s, and he kept up with them. CHECK THIS OUT! The lead single follows, “Good Clothes”, and while it has the radio appeal it doesn’t stray away from Little Brother’s sound. Shout out to Pooh on this one, talking about the HUSKY jeans at Sears! “After The Party” is next up and this one is about bagging that girl when club let out. You know the motto “if you ain’t got her by now, you ain’t gone get her!” I like this one, real smooth check for it. “Extra Hard” is next and the guys do just that, go extra hard on an up tempo beat. One word…BANGER! “Step It Up” follows and on this one the fellows give some insight to the brothers that we need to step it up and do grown up things with the ladies. The beat is laid back and Tay and Pooh provide some smooth lyrics. Good drop. “Two-Step Blues” is next and the first thing that catches you is the beat, makes you want to dance. But don’t get it twisted, this is grown folks music! Pooh and Tay pull out the soft shoes on this one! CHECK FOR THIS ONE! “That Ain’t Love” is up and this is one of my favorites on the album. Illmind with another heater on this one! LB and Jozeemo killed the beat on this one. “Dreams” is next and Pooh and Tay killed the horn laced beat. The production is great, the rhymes are tight; what more can you ask for? The last song on the album is “When Everything Is New”, and this is the retrospective track where Pooh and Tay take us on a journey into the lives of Little Brother. The production closes the album out perfectly. Shout out to my boy Anthony Gilles! You made the album, how crazy is that?

Bottom Line:
The departure of 9th Wonder freed the group up to get other producers; a needed asset. Not that there was anything wrong with 9th, his sound was getting a bit redundant. The different producers brought fresh beats to the table for the guys to demolish, which they did. Top to bottom this is their best album to date. Pooh and Phonte have catapulted their way into the forefront of groups not just from the South but in Hip-Hop. Now is the time for the world to take notice. The two have great chemistry together, therefore making great music!

nappy Picks: Go get this album! Don’t get caught sleeping!