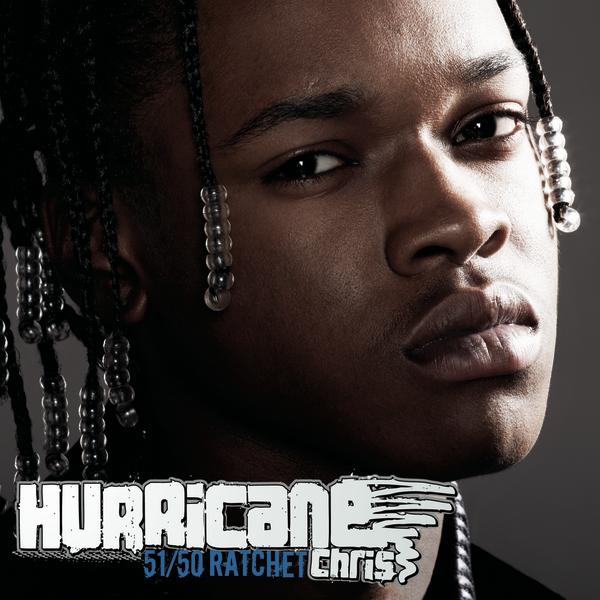 As hard as it might be to believe, I really don’t have anything against Hurricane Chris. Is it my fault than when I first saw him I thought, “Who is this chick trying to take Da Brat’s style?” Then I found out he was a guy. My bad. I guess a lot of people don’t make that mistake anymore since his single “A Bay Bay” blew up. So now, months after, here I am getting ready to review the 18 year old Louisiana native’s debut album, 51/50 Ratchet (I still don’t know what that means). Why did Hurricane Chris wait so long to drop his album even though his song has been out since April? Who knows, but I bet it was worth the wait (Can you detect the sarcasm?).

The album starts out with “Getting Money” featuring Nicole Wray. It’s your standard fair; “I grew up hard, I stay packing some heat, and I get money”. Nothing new here. The hook, while I think Nicole Wray is talented, is annoying as hell. Missy Elliot old home girl Nicole also appears on the second to last track on the album called “Momma”. I don’t have a problem with rappers giving props to Mom, but bring some creativity. Most of the rappers just try to improve on Pac’s “Dear Mama” formula; 99% fail. The second track on the album is “A Bay Bay”. I never really liked this song too much but I never really hated it. Shout out to that little 4 year old kid on the hook, I saw you stuntin’ on stage at the BET Hip Hop Awards with your chains on. I just hope your little ass know your ABC’s too. I will say that the “A Bay Bay (remix)”, which also appears on the album, is kinda a guilty pleasure. But it isn’t because of Boosie, E-40, Baby, The Game (Who mails it in), or Angie Locc (Who scares the hell out of me). The only reason the remix is still on my iPod is because of the Jadakiss verse (“Aint no stopping that I be where the gwap is at, excuse me, I be, wherever its poppin at”). I will admit that Hurricane Chris spits his best verse of the whole album on the remix also. Mr. Collipark shows up to produce some tracks for Mr. Hurricane Chris: “Touch Me” & “Playas Rock”. “Touch Me” is your basic attempt at getting the ladies involved. With lines like, “If I have to sacrifice a body part, I go deaf. Long as I can see your body with my eyes I don’t care”, this is a definite skip. The latter track, “Playas Rock”, is probably one of the better tracks on the album. It samples some Earth, Wind, & Fire and is kinda smooth. It’s brought down by Hurricane Chris’s rhyme cadence that he uses for every verse on this album. “Leaving You” is another song for the ladies but this he’s telling his lady he’s, um, leaving. While this song isn’t garbage, the hook once again makes it almost unbearable. Don’t get it twisted though, Hurricane Chris isn’t just a ladies man, he’s a killer too. “New Fashion” has Chris talking tough at rappers who “only thing they rapping about is they watches and they chains”. Come on Chris, don’t be a hypocrite. “Do Something” also has Hurricane Chris going at the ever present haters that preventing him from sleep and treating to come over their house and blast. Both these tracks just doesn’t fit a guy who looks like Kriss Kross and says “A Bay Bay”; I’m sorry. It’s the song “Bang” that almost fucked up my day. No not because of the tired content, but because it has a mediocre rapper featured on the track named Big Poppa. Now that’s some bullshit! Big Poppa? Really? Dude is like on 3 tracks too. What’s next? A rapper named 2Pacalypse? I will give Chris credit for something. Even though I feel he’s a “ringtone rapper”, I don’t think he feels that way about his self at all. On songs like “Beat In My Trunk”, “Doin’ My Thang” and “Walk Like That”, he makes statements about running the South and such. And as much as I hate to say it, I do hear a little old Cash Money in his sound which is not a bad thing. It isn’t more evident than on his second single, “The Hand Clap”. Yeah, I don’t care for it either, but don’t you hear shades of “Back That Azz Up” in it?

Bottom Line:
Some of you may feel I was too hard on Hurricane Chris in this review, and maybe I was. But you know what? It wouldn’t surprise me if he did blow up. Y’all already letting a lot of bullshit through, why not this? All in all, the beats weren’t that terrible and Hurricane Chris, while not the best rapper by any stretch on the imagination, does have a semi-tolerable delivery. This album is definitely not for me, but if your taste is more Lil’ Boosie than Nas, you may wanna check this one out yourself. I’ll pass on this one.