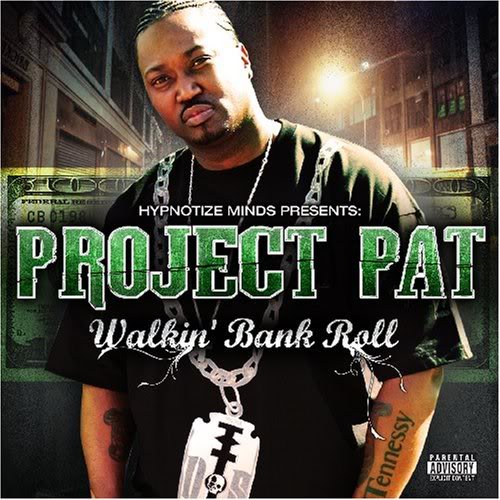 The 35 year old rapper straight outta North Memphis strikes back again, and I got to say, Project Pat is one of my favorite rappers out of the Prophet Posse/HCP/Triple 6 Mafia Camp throughout the years from their underground demonic days to MTV’s Hollyhood. This is his 5th world wide released (not including the 1994 Solo Tape, and Murderers & Robbers underground tape). Hmmm, does this release surpass his last effort Crook By The Book? Well, we will see huh. Alright people, check it out.

First song on the track besides the intro is called “Rubberband Me”, this song is alright. I mean nothing too special, I like the beat. Next song next is the single “Don’t Call Me No Mo” (featuring Three 6 Mafia), I swear they should call themselves DJ Paul & Juicy J now since its only 2 instead of 6. Anyways this song is decent, but I’m not really digging the chorus too much. Alright people lets continue to roll over to the next track “Talkin’ Smart” featuring Pimp C, this song is pretty tight to me. Pimp C is not the best lyricist but he has so much style, and he is well respected in the south. Project Pat holds it down but Pimp C stole the song, sorry Project. “Hate My Swag”, I noticed alot of people are rapping about swag nowadays, this song isn’t all that to me. I’m not really feeling it much. Next song “Powder”; the chorus to this song has been on Gangsta Blac’s (Ex: Triple 6 Member) original song called “Powder” which was produced by Paul & Juicy in 1996, but anyways I like the song in a way. I like the beat a lot. Paul & Juicy are underrated as producers and as DJs. “Motivated” featuring Will Wesson; I like this track a lot but I don’t like the chorus much, it sounds like it was forced instead of being more creative. I still like Project Pat rap. Okay okay folks, let’s move to the next track “Wagon Wheels”. Paul & Juicy J got down with the beat, it’s really laid back, and I could really put this in the ride, and coast down the highway. This song isn’t that bad either; once again the chorus could have been a little better though. “Hit It”, I’m sure you all know what this song is talking about. It’s definitely not talking about hitting a dude upside the head with a bottle. Hmmm, this song is not something I would listen to a lot. “Finna Start Robbin”; I like this song. This is the gangsta Project Pat I liked from the Mista Don’t Play days. “See You Fall”; hmmm at first I didn’t like this song but after I kept listening to it a lot more, it’s alright. “Good Weed”; the track itself is dope. The song is alright, it’s the chorus that’s not really grabbing me much. Okay next song “See Me”; okay at first the when this song came on, the beat sounded off key. This song isn’t bad though, I kinda like it. The beat is on point, even though it sounds like a lot of other tracks. “Bull Frog Yay”; naw I’m not digging this song at all. Especially when he start making noises like a frog on the chorus. My nigga Pat lost me with that one…Skip! “Ready For Whateva”; well folks I’m sure you have a idea about the song from the title. It’s your average song about people talking about people, and guns & shit like that. Its okay though, but I don’t see myself listening to it much because its not too creative, better yet this song isn’t grabbing me much.

Bottom Line:
Hmmm, well this album is better than Crook By The Book, (that album wasn’t that good to me at all). This one isn’t bad though. I felt like it could have been better. There were no HCP songs on here at all, barely no features on here. I mean, I like to hear albums with more solo songs but a Three 6 Mafia album isn’t an album without the members being on the songs. I really miss them posse cuts. The tracks on here weren’t bad but it falls short behind Mista Don’t Play, and Ghetty Green albums. Project Pat is my nigga, and I think he is underrated in the South. He might not be the most lyrical rapper out there but he has stories to tell from “Gorilla Pimp”, “We Can Get Gangsta”, “Aggrevated Robbery” off the Mista Don’t Play album. Also check out older Triple 6 shit such as Indo G, Three 6 Mafia, Gangsta Boo, Prophet Posse, Killa Klan Kaze, and underground shit Project been featured on when he was more raw. I also feel that this album could have been harder like his older material he previously recorded over the years, but overall though, this was a good effort though.