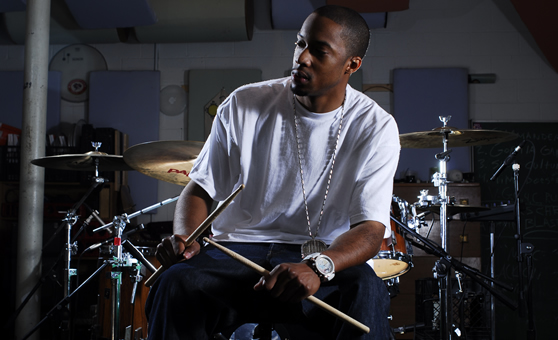 I had to do another iPod Hustle seeing that last one was kinda mediocre (What was up with that artwork?). Well, here’s three tracks off my iPod.

Download: Joe Budden feat. Royce Da 5’9″ – “40/40”
Year: 2010
The internet may have crippled the music business but it does gives us more relevant lyrics. In Royce’s verse alone he references Waka Flaka Flame’s shooting, Fantasia’s reality show, Jersey Shore, and Haiti. No 80 year old rappers and no motherfucking wallet chains, tight pants, and colorful shirts here (Budden’s words not mine). Is this a response for Benzino’s “Slaughterhouse Killaz“?

Download: Black Milk – “Keep Going”
Year: 2009
This came out right at the end of last year which is a shame cause I’ve been listening to this track more since and it could have made my Top 5 for 2009. The drums here (Courtesy of Daru Jones) are CRAZY! Album Of The Year (Milk’s title for his next album) drops sometimes this year.

Download: Project Pat fear. Crunchy Black – “Don’t Save Her”
Year: 2001
Have you seen Malice’s “Wake Up Calls” video? Remember that scene where their in the car rapping along to “Don’t Save Her”? That was me and my friends in 2001 in a silver Honda Civic. Even though I love complex lyrics, there’s a place for Project Pat on my iPod. You too Crunchy Black.