The Pack – Based Boys [Review] 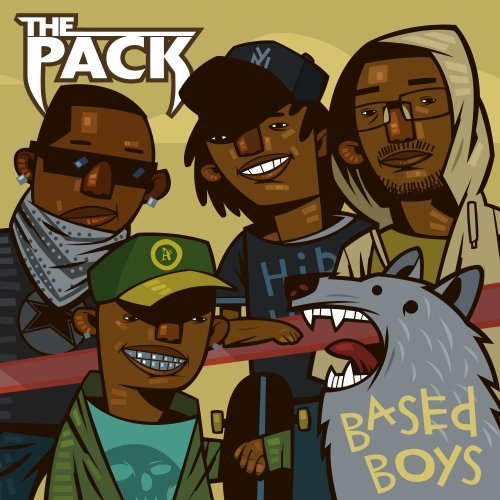 Have I told you that I love my job? This has been a DOPE year for Hip-Hop. Amidst the crucifiction, the artists have stepped up and delivered one of the best years for Hip-Hop since probably the golden age. So anytime I get assigned a group I don’t know shit about, I’m even more excited.

The Pack from Cali is my latest challenger.

“Rumble” A good way to intro, basline, clap, some sound effects, the flows. Basically the group intros themselves as KO artists in the game. The sleepy flow is engrossing with the beat and is a great way to be exposed to the group.

“I Look Good” Sounds like a left over luke beat…damn leftover, I think I heard this shit on one of his CDs. LOL. Not my steez, SKIP.

“In My Car” Simple, just like the title says, its about the car and stuntin on the scene. I can see someone playin’ this on the local Friday night strip. Dope baseline so the trunk will hummm. That’s about it for this one.

“My Girl Gotta Girlfriend” This is a copy of Juelz “Whistle” song, beatwise. Lyrically, they just tawn bout sexin’ and stuntin, but the beat is fun, lyrics match. I think this is gonna be my new catchphrase too… “Bitch I’m amazin!” LOL.

“Gimmie Racks” How is this beat slower than the others? Is that even possible? Sadly, it reminds me of that damn Crispy song, so please, do yourself a favor, skip this shit.

“The Milky Way” I can’t place this sample, sounds like some PM Dawn or something, but they getting they spaceship talk on in this one. Some silly stuff. Chill enough to get some play though.

“Rock N Roll” Ok, this is probably my favorite song on the CD. Contains a sample that, well, lets just say its for “Old Times Sake”. I will link this up for you.

“In The Club (feat. Mistah F.A.B)” Eh, more club rap. Dude said I’m on my own shit so I’m sittin on dookie…I have no clue but that nonsense was funny as hell to me.

“Club Stuntin’” Our group uses the Magic Mike formula, a lil chord, a lot of bass, and some words…or sum’n. We in the club, we stuntin. Thas bout the whole song.

“At The Club” 1986 called, they want this back. Very dated…but they shit works. LOL. I can’t place the sample right now, but I like it.

“Booty Bounce Bopper (feat. Too Short)” REALLY sounding like Dj Magic Mike now. Song is just what it looks like, a skripper song. This will do well in the grown up clubs.

“Fly” Dude comes on and says ‘Lets have fun with this one.” Um, dude, have YOU listened to the CD? LOL. Anyway, he is right, its fun and is just about being fly as hell. Oh, someone tell these fools they are rappers, not singers. I’m jus sayin’.

“Backseat” I promise, My velour troop track suit danced out the closet on this one. I am NOT lyin’. Ok, I am, but I DID start pop locking in place soon as this came on. Turbo knocked on my door and asked for my broom…if you don’t get it….

“The Milky Way (remix) (feat. Kaya) Look, no point in me wasting space on the site, SKIP.

“Candy” This my pussy I can do what I want / hmmm, Imma big girl. This is the hook…song is good for the able bodied skrippa. – came back…he said You poppin’ like orville… Pop ova and skip this shit.

“Vans” This is the song and youtube video that is killing the world right now. It was on the initial EP back in December and its on this release as well. Pretty fly song. I ain’t gonna go buy any Vans or nothing, but its good to hear something other than AF1’s and Adidas get love.

Bottom Line:
I am not an elitist, I think some artists fit a niche and make music for that niche. I don’t expect all to come with the lyrical firepower of a Common nor the delivery of Weezy. I celebrate diversity and variety in Hip-Hop. That’s what made the Golden Age, GOLDEN. The Pack fits right in. They are a fun group that don’t kill you the entire time on the CD. For that alone, they get 2 stars. The same thing that made Too Short dope makes them dope, they are fun, they have pretty dope beats, and they are different. If you have room for Fun-Hop in your collection, give this a listen.