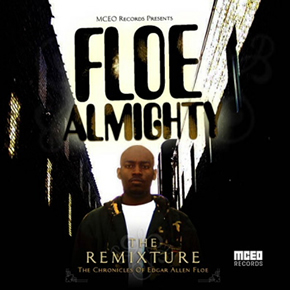 Edgar Allen Floe brings us Floe Almighty – The Remixture. Its 13 exclusive mixes of his 2006 Floe Almighty project as well as some bonus tracks. This CD is the first realease on Floe’s MCEO Records. The name comes form one of the most reknown poets in history and Floe pulls his poetic spirit from that inspiration. The Justus League continues to bring us hot music from the up and coming underground market that features one of nappyafro’s faves, Little Brother. Let me hit you with the tracklisting and production info first.

Skyward comes on and is a bit different than the typical 9th Wonder track. Typically, Wonder makes MUSIC not beats, but this one is more Emcee ready on the boom bap type steez and Floe does a really nice job riding the beat. As the title implies, it’s about Floe making changes and his dedication to grow and be better each time out. Refreshing cut.

Flow Free Style is a darker sounding track and floe is spitting some knowledge about his life in the game and his story. Wanna know who he is? Listen to this track. Nice throwback hip hop reference in there for you listeners too.

Craftmatic introduces a fun background track that Flow playfully weaves and dances over with some pretty dope lines. The beat knocks and is very well done. Good track.

Livelyhood comes on very musical, one of the best tracks on the album I don’t know if the lyrics really correspond to the song though. It’s a party starter by lyrics….but the sound and the beat are laid back groove type music. I think that separated lyrics from music, he has 2 great songs. Together, they contradict each other.

Floe Almighty HERE is the 9th Wonder. Samples, level, good energy, and I think Floe recognized that this is one of the best on the album. Floe lets you know that he is here, plants his flag, and puts us on notice. Dope track

Nightwatch feat. Mal Demolish has a very dramtic intro, guitar and chords come on and the flow comes on with it. No long intro, straight rappin’. I have to admit, I’m not up on Mal Demolish, but he does his thizzle quite nicely. We are introduced to a little story telling ability, welcome indeed.

The Torch is groovy as hell and with the sample and groove of the 70s and 80s sound, overall, it’s a nice track. Laid back like I like and some impressive chains as well, can’t hate on this one.

Hostility by beat alone sounds like it could be the Torch pt. 2. The groove just goes on to the next song. I think Floe comes a little too hard on this beat, however, its not bad. The mesh seems a little off though.

One and One feat. Diablo Archer is one of the singles and is overall, the best track top to bottom. Diablo and Floe trade tymes and they actually sound great together, good sound contrast. Think Cheeba and Suede type collab. Dope track here.

Changes is more of an aggressive track, aptly called the Mood Swing. Remember, you’re seriously fuckin with a grown man / lemme take that back…you ain’t fuckin with Floe man. Brings a little of the battle rap sting to the flow. Then it flips…dude changes beats right in the middle of the song….pretty hot. Creativity always gets love in my book.

Floe Shout Outs is a short song dedicated to those who follow and keep up with EA Floe. A longer interlude if you will. Its okay, the sentiment is great, but the track itself is just ok.

The Righteous Way To Go is the most mellow cut on the album. I wanted to light up and drink some henny on this one, and I don’t smoke. It’s that kind of feel, even with EA speakin’ on the history and changes of hip hop as he lived(s) it.

Cruise is a funky track that features some nice horns and bass guitar married to some pretty chill metaphors and rhymes.

I am going to leave the bonus tracks for you to check out when you cop this album. You won’t be dissapointed in them at all. I just felt like leaving you SOME present to discover on your own.

Bottom Line:
This is a good album, well done and a backpacker’s best friend. Solid album that is defnitely a laid back chill type vibe. Thanks to Edgar Allen Floe for shooting me an email to peep the album, it is definitely a welcome additions.