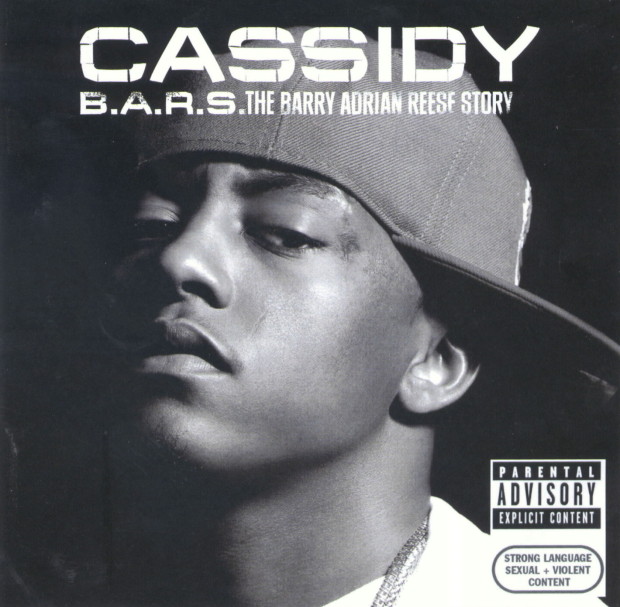 After a tumultuous year where he was cleared on a murder and a car accident that nearly claimed his life, Cassidy returns with B.A.R.S. The Barry Adrian Reese Story. The Philly rhyme fanatic looks to make a name for him as an emcee not just a battle rapper. After making big noise on the mixtape circuit, Cassidy is ready to be considered in the same circles with Hip-Hop’s elite. One can wonder, can he shake off some disappointments with previous projects and dismiss the notion that battle rappers can’t make good albums?

The album kicks off with an intro titled “B.A.R.S versus Da Hustla” which is a continuation off his old albums where he battles his alter ego. If you love freestyle battles, you will love this battle. This shows you why Cassidy is well respected in the freestyle arena. HOT! The next one up is the lead single “My Drink & My 2 Step”. Hot single, but I question Cass about his constant references to him beating a murder rap? Maybe that is something to brag about, I wouldn’t do it! “Where My Niggas At” follows, and this is one of those rowdy, rowdy, bout it, bout it, up north tracks. Neo da Matrix puts together a sinister beat that goes well with all the gun talk on this track. Cass is on top of his game with lines like, “I don’t walk around now pretending I’m Gotti, but I still clap the Mac 10 to somebody.” BANGER! Next up is “Will Never Tell (Uh Uh)”, initially the hook sounds funny but as the song goes on, it grows on you. The track is about snitching…uh uh! Well actually not snitching. I thought that campaign was over, but guess not. Lyrics are on point, but the hook has to grow on you. “I Pray” is on deck, and you see a mellowed out Cassidy on this record with an assist from Shizlansky. The song is pretty good, definitely worth a listen. “Innocent” is next up and the track is on the wack side, but the lyrics are on point, nothing major on this song, just another song on the album that sounds okay. Next song features Bone Thugs N Harmony and Eve along with Cassidy titled “Cash Rulez”. The first thing I notice is the up tempo beat that Cassidy spits over. This shows his versatility rapping with Bone over a Bone beat. But don’t sleep on this one, this is a hot one! “Leanin’ On The Lord” follows, and you have an introspective Cassidy on this track telling stories about hardships including his own. Angie Stone on the hook (after Yolanda Adams turned it down), but you got to hear this one! “Damn I Miss The Game” is next and Cassidy let’s his frustrations out about the state of Hip-Hop. He said he is tired of the dumb rap and when the real is gone come back, that is what we are wondering. But I like this one! The next track has that mellow beat on it that I am digging, it’s titled “Done 4 Me”, and you have Cassidy spitting some grown up lyrics. CHECK FOR THIS ONE! The beat on “I Get My Paper” is sick, but don’t think the beat is the only thing blazing. Cassidy is coming with some crazy lyrics on this track, “I’m from a block where niggas get it poppin at/where cats is known from boxing and poppin gats/but you gotta aim low when you poppin that/cause that hot shit got kick like a soccer match!” Cassidy lets the boss’ wife Mashonda put in some work on “Take a Trip”. I guess this is his song for the ladies, the chicks might dig it, but this is not one for the fellas. This isn’t one for me, but it’s not a bad song. John Legend makes an appearance on “Celebrate” co-produced by Kanye and Devo Springsteen. The song is nice, real smooth, and some nice crooning by Mr. Legend. Check it out! Cassidy takes a stab at producing and rhyming on the last song titled “All By Myself”. The beat is simple, but sometime simplicity makes the best songs. NICE ONE!

Bottom Line:
This album was better than expected. Like said earlier, battle rappers don’t make great albums, but this one was actually good. Not being a Cassidy fan before this, he won me over on this LP. He has good song making ability, good production, and good lyrics, so he has the blueprint down to make a good album. The only knock I have for Cass is his constant references to his beating of the murder. Does that make him a tough guy? But other than that, this is a solid album from the Philly Rhyme Fanatic. (I made this one up)

nappy Picks: This album is worth the money, so pick it up!