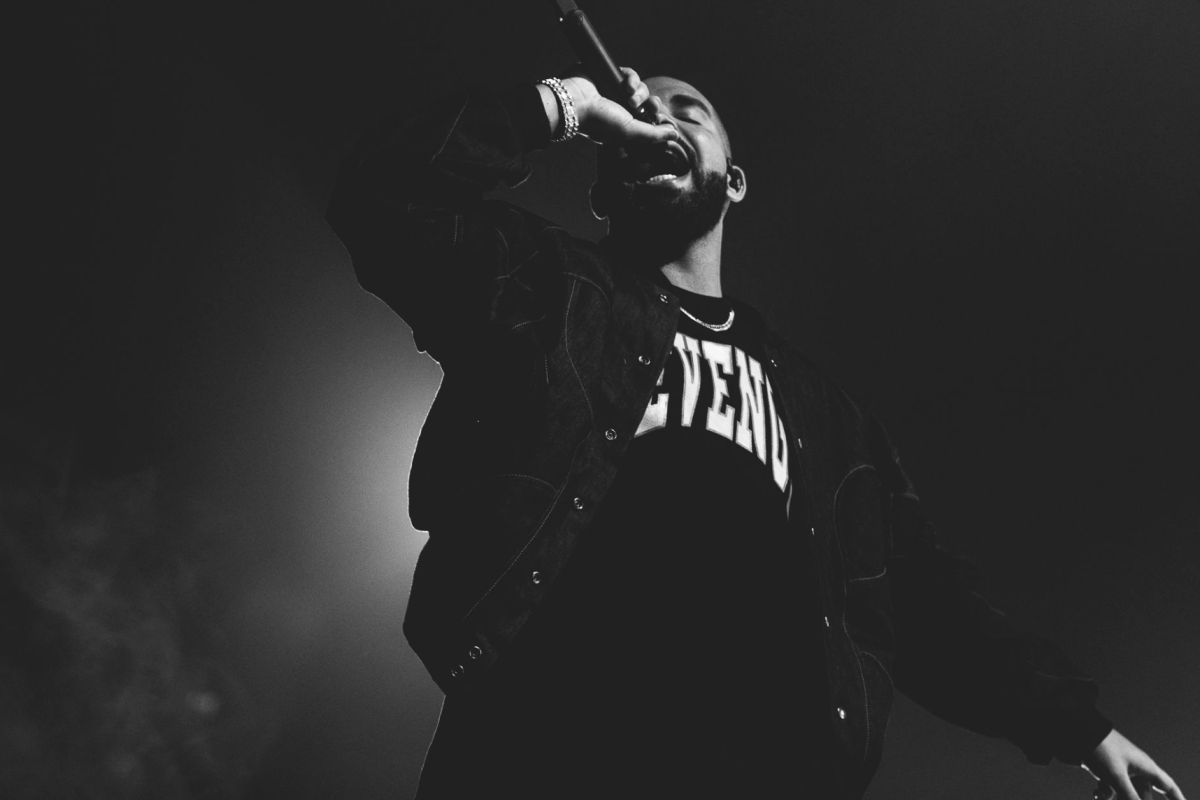 We all know the Aubrey “Drake” Graham story. Former child actor turned rapper, dropped a couple of mixtapes before getting signed by Weezy to Young Money. After dropping FOUR multi-Platinum releases and taking his spot atop the game, he has remained one of the #1 draws in the last 7 years.

All that changed when he came under attack about getting ghostwriters for his songs. He has even been called a music thief for what happened with “Hotline Bling”. Even with all this mountain of evidence, the public (Well, most of the people) doesn’t care at all. They still flock to arenas to see him, they still help him break records on the charts when he drops an album. Never have we had an artist so polarizing that you either like him or hate him. Being the top dog (no pun) in the game means you can make up new rules. One of the new rules you can employ… calling your “album” a playlist instead of an album. Who else could pull this off?1. Free Smoke
Produced by Boi-1da, Allen Ritter, & Akira Woodgrain
Well, Drake came out the gate with some aggressive bars on this one. The beat thumps hard through the speakers. Funny line in the song, “How you let the kid fighting ghostwriting rumors turn you into a ghost?”. Damn, Drake…you just gone take pot shots at Meek forever, huh? Nice start to the album.

2. No Long Talk
Featuring Giggs; Produced by Murda Beatz & Cubeatz
Second track and I noticed that Drake switched the flow up and featured a rapper from the UK named Giggs. Can’t even front and act like I like this one at all. The beat is on the wack side and I’m not interested in Giggs flow/lyrics one bit. SKIP!

3. Passionfruit
Produced by Rogues
The song sounds exactly like the title. This is some cruise ship music if you ask me. This song puts you on a boat playing shuffleboard with a drink in your hand. I say all that to say that I REALLY LIKE THIS SONG! Heartbreak Drake makes an appearance on this track. If you’re keeping count that is the third different Drake we’ve seen on as many songs. Break out the soft bottoms for this one and dance the night away.

4. Jorja Interlude
Produced by 40
This is an interlude and Drake isn’t really saying much on this one. Maybe I’m missing something, but this one you can SKIP!

5. Get it Together
Featuring Black Coffee & Jorja Smith; Produced by Nineteen85, 40, & Stwo
Now something about this beat works the soul. Maybe Drake is channeling my inner African roots with this one. The beat will have you two stepping even if you can’t two-step. It has that House feel to it that will have you dancing throughout the whole song. BANGER! (Drake only did the hook on this track)

6. Madiba Riddim
Produced by Frank Dukes, Nineteen85, & Charlie Handsome
Judging from the title, I’m pretty sure Caribbean Drake is going to make an appearance on this one. Heartbreak Drake is doing his singing/rapping thing over this one and it also has an infectious beat that makes you start bobbing your head.

7. Blem
Produced by T-Minus & Frank Dukes
Caribbean Drake is back for this one. This one will have all the girls doing the dutty wine in the dance clubs. Say what you want to about Drake, but he makes songs that have the women dancing! The production on this one really drives the song home.

8. 4422
Featuring Sampha; Produced by FrancisGotHeat
This sounds like an old Jodeci song to me. Well, just the hook. Drake doesn’t appear on the song. After listening to the album ten times, I still don’t get it. SKIP!

9. Gyalchester
Produced by iBeatz
After a couple of “soft” songs, Drake jumps back into his rapping pants for this one. The beat on this one goes HARD! Drake doesn’t disappoint with the lyrics on this one:

I know I said top five, but I’m top two
And I’m not two and I got one
Thought you had one, but it’s not one, nigga, nah

10. Skepta Interlude
Produced by Rogues
Drake let this guy get a whole interlude? Really? I’m not into the grime scene, but I can tell it’s not for me. No disrespect, but I don’t think they know how to ride a beat yet. I gave it a chance and now I have to tell you guys to SKIP!

11. Portland
Featuring Quavo & Travis Scott; Produced by Murda Beatz & Cubeatz
Drake starts this one off with “My side girl got a 5s with the screen cracked, still hit me back right away!”. The head Migo, Quavo, lends a 16 to the track and I have to say that he is BY FAR stepping his game up. If I was the other two Migos I would be worried. Travis Scott showed everyone how much of his wave Kanye borrowed. Interesting topic of the song, people stealing your wave in the business.

12. Sacrifices
Featuring 2 Chainz & Young Thug: Produced by T-Minus & Deejae
This is my favorite song off the whole “playlist”. Drake, Chainz, and Thugger use a repetitive word flow on this song that is so dope to me. When Young Thug actually raps and puts all the gimmicks to the side, he’s a pretty good artist! But the hook is what will grab people:

13. Nothing Into Somethings
Produced by G. Ry, Wallis Lane, & Nabeyin
Heartbreak Drake is back with the singing on this song. Another “sexy” song that will have all the girls on snapchat fresh out the shower mouthing the lyrics while they’re drying off. Short but sweet song.

14. Teenage Fever
Produced by Hagler
Drake uses a J-Lo sample (“If You Had My Love”) on this one for the hook. He’s doing the singing thing on this track and it’s not that hot. This was the first song on the “playlist” that I heard, didn’t like it then, still don’t like it now. SKIP

15. KMT
Featuring Giggs; Produced by Ness & Chef Pasquale
Giggs is back on this track, and I’m going to give you a tip. If you don’t like Giggs, skip AFTER Drake gets finished rapping his verse. I’m saving your time. Drake caught a little flack behind his use of the slang “Kissing My Teeth” which in the U. S where we say, “sucking your teeth”. Did this dude (Giggs) just throw a Batman line in the song? Really?

16. Lose You
Produced by 40 & Stwo
Drake is back rapping and he is asking his city of Toronto did he lose any of you with all the changing and growth that he’s experienced as an artist. When Drake is on one, he’s on one and there’s nothing you can do to stop him.

17. Can’t Have Everything
Produced by Jazzfeezy & Samson
Once again Rapping Drake is back on the track and this one over some dope production. He throws a slight jab at Meek on this one like:

6 God isn’t going to let this go any time soon!

18. Glow
Featuring Kanye West; Produced by 40, Kanye West, & Noah Goldstein
Don’t worry people, this is the genius Kanye and not that other Kanye we’ve been accustomed to hearing of lately. Singing Drake resurfaces and with the help of Kanye they make a good song. It’s not dope, but it’s pretty good.

19. Since Way Back
Featuring PartyNextDoor; Produced by G. Ry, PartyNextDoor, 40, M3rge, & T0PLFR
I tried to like this song, but I couldn’t get into it. I don’t know if because it’s too long or PND ruined it for me in the beginning. Whatever the case is, I have to tell the people to SKIP this one too!

20. Fake Love
Produced by Vinylz & Frank Dukes
You’ve all heard this one. If you haven’t then I don’t know what to tell you.

21. Ice Melts
Featuring Young Thug; Produced by Supah Mario & S1
The Thugger we are all used to returns to lend the hook to Drake on this one. I have to say that I enjoyed his previous feature over this one. Not saying that this song is bad, it’s just that it has a beat that you wouldn’t normally hear Drake on. This is definitely a #teamyoungnigga beat on this track.

22. Do Not Disturb
Produced by Boi-1da, Ritter, & 40
Drake finishes the “playlist” with a walk off homerun with this song. I’m glad he finished it off with Rapping Drake instead the other versions of Drake. Nothing too dramatic to report on this one, just good to hear the 6 God rapping for the fans. Nice.

Drake does what Drake does. On this “playlist” he gave you 22 tracks and over 80 minutes of music. That music takes you on a musical journey from Canada to the Caribbean. From there it takes you to the UK, with a flyover in Africa, and a pit stop in Atlanta. Drake is all over the globe showing his musical influences on this “playlist” and is expanding the reach of Hip-Hop. Can we credit Drake for doing this all alone? No. But he is doing it on the biggest stage, so he will get some of the credit. Is that fair that he will get credit for it? No, it isn’t. But when you are the top draw in the game exceptions to rules are made. Drake gave you a “playlist” that you can listen to with the fellas, lay up with your lady, or play something for a group of people. Another win for the guy from the Dot!