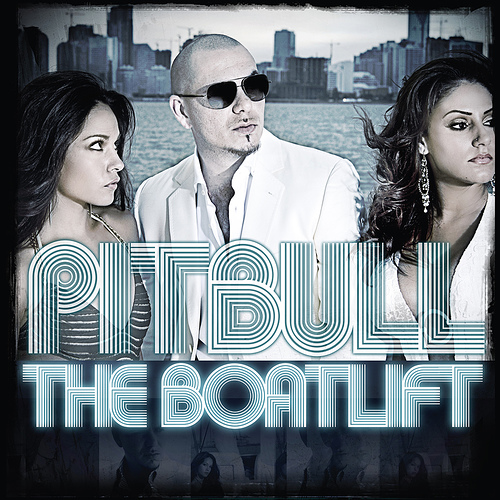 Releasing an album every year is not an easy task, but Pitbull is releasing his fourth album in as many years titled The Boatlift. While his name is Mr. 305 many outside the Sunshine State might not know who he is. But after some singles that created some buzz like “Shake” with the Ying Yang Twins, people started to notice the Cuban from the M.I.A.

The album starts off with “A Little Story”, an intro with Pitbull flowing a cappella about how he chose the rap game over the dope game. This is not only a good start, but showing people that he can actually spit a little bit. The next song is the club song titled “Go Girl” featuring Trina, and when the Diamond Princess is in the building, you know what it is! It is a very up tempo song, sure to have the people in the club dancing. The next song is “Dukey Love”, and before you get the wrong idea, it’s actually a song dedicated to the love of a woman’s butt! Fabo of D4L resurfaces along with Trick Daddy to assist Pitbull on this one. Check your boy Trick out on this one! “I Don’t See ‘Em” is on deck, and the hook is on the dull side, but the beat is hot. The lyrics on this one are pretty good, but the song is hurt from the hook. The next song is “Midnight”, and from the top it sounds like a Justin Timberlake song. I really don’t like this song. SKIP! “Ying & the Yang” is next and the beat makes you want to dance, but it’s not one to check for lyrics. This is a straight club song. Lil Jon lends a hand on “The Anthem”, which Pitbull does the hook in Spanish for all his Cubanos. But imagine a Reggaeton/Lil Jon track, I know, not a good look! SKIP! “The Truth” is another a cappella rhyme from Pitbull, again showing his lyrical ability to the naysayers that say he can’t rap. The Chi is represented on “Candyman” when Twista drops a verse. Pitbull shows some versatility matching Twista’s rapid fire flow on this one. HOT! Jim Jones drops in on “Sticky Icky”, and you can guess what the song is about. Lil Jon’s production is better on this one, and Jimmy didn’t hit us with his “Baalllin!” But don’t worry, the song was still good. Just wish he could have fit it in there somewhere. Switching some gears, we have Pitbull taking it slow on “My Life” where he is talking about what he sacrificed to get where he is today. The song is good, definitely worth a listen. Since we are in the slow lane, Lloyd sings on “Secret Admirer” which borrows the hook from “My Boo.” You might have to be from the south to know that one. But the song is actually decent, a nice change from all that murder/drug/stunting that is going around now. CHECK IT OUT! “Get Up/Levantate” is next up and this song is one of those crowd participation songs encouraging everyone to get out of your seat and dance. I can hear the crowd getting rowdy in the club off of this one. “Fuego (DJ Buddha Remix)” a remake of an earlier song, is another of one to dance the night away to, but don’t sleep the song is on the good side. The next song is “Stripper Pole (Remix)” and the song is about getting drugs out of the ghetto…for real! No it’s about strippers, and this one isn’t all that hot. The singing by Toby Love isn’t pleasurable to the ear, but Pitbull’s rhymes are on point. B-Easy’s favorite MC Yung Berg makes an appearance on “Un Poquito”. Yung Berg said he had a private plane on this one! Yeah! But the production on this one is hot, and YB actually spit a verse that I like. CHECK THIS OUT! “Tell Me (Remix)” is next and I wonder how many remixes can you have on one album? The gears have changed again, back to the slow stuff. I really don’t like this song, not because of Pitbull, but the singing in the song. SKIP! The album closes with “Mr. 305”, another a cappella, and he explains how he got the name “Mr. 305.” I can’t front, Pitbull got some flow with him. It’s short but sweet.

Bottom Line:
Overall this was enjoyable experience for me, this album is straight 305. It represents all the different cultures that make up the music scene down there. This is a club heavy album, but this is what the album was intended to do, make you move your body. If you have ever clubbed in Miami, then you know that you don’t stand still. While Pitbull might look like a newcomer, he’s actually a seasoned vet. The album has more hits than misses and sure to have the ladies shaking it up when his songs come on in the club. This album has a heavy Miami feel to it, and most certainly will keep the home team happy.