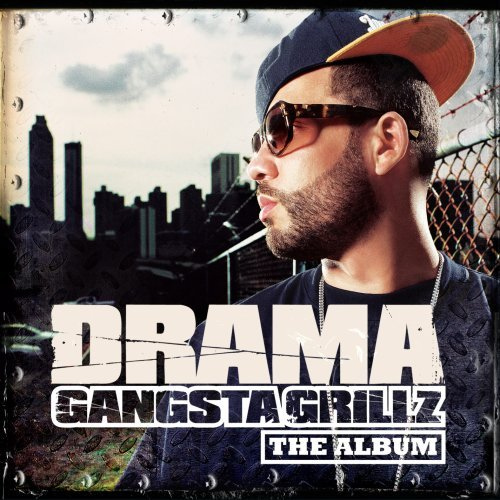 After a year started with a raid on his recording studio, an arrest resulting from the raid, and the arrest of his boss, DJ Drama has had an interesting year. So after being accused of being a bootlegger of his own music, “Mr. Thanksgiving” decided to release a soundscan album titled Gangsta Grillz: The Album. Everyone knows “the iPod king” brings that heat on his mixtapes, but can a mainstream release satisfy his loyal listeners. Who knows, but after much hype the album is finally here, so let’s see what we got!

Gangsta Grillz kicks off with an intro “The Setup”, where Dram makes light of the raid situation. Kind of funny of how STUPID he made the agents look. The title track is next; “Gangsta Grillz”, but it’s nothing but Lil’ Jon getting everybody crunk with some shit talking! The beat is hot, but the real treat comes up after with “Feds Takin’ Pictures” featuring an all star cast (Jeezy, Young Buck, Jim Jones, Willie the Kid, Rick Ross, and T.I.) Don’t worry, the song is BLAZING! Production by Dame Grease and lyrics provided by the stars; WINNER! To steal a phrase from Drama, “now this is what Gangsta Grillz is supposed to sound like!” Next song is “Keep it Gangsta” featuring Yo Gotti, Lil’ Boosie, and Webbie. The beat is on the dark sound, not usually the tempo I’m used to hearing from them, but they give you their typical routine, nothing special about their rhymes or this song…NEXT! WEEZY ALERT! WEEZY ALERT! Well Wayne makes an appearance along with Freeway, Willie the Kid, and T.I. on “Cannon (Remix).” Now this song is old but the production is sick on this one. But notice T.I.’s angry flow on this one, a mad T.I. or is this Tip? This track is CERTIFIED HEAT so you got to hear this one. Lil’ Jon offers another hand on “Makin’ Money Smokin’” along with Willie the Kid (3rd appearance out of 6 on the album), LA the Darkman. Yes, I said LA the Darkman! Not only is this a strange mixture of artists and producer, but the song isn’t all that hot either. But some will like it, some won’t. I’m in the latter of the two. The lead single follows with “5000 Ones”, featuring another all star cast (T.I., Nelly, Jeezy, Yung Joc, Diddy, Twista, and guess who, Willie the Kid!) All of the heavyweights on the song and it still doesn’t do it for me. Maybe I’ve never had 500 much less 5000 ones in the club to make it rain, so I don’t get it. 3 STACKS ALERT! 3 STACKS ALERT! Outkast joins in on the fun with Marsha (formerly of Floetry) on “The Art of Storytellin’ Part 4”. Call me crazy, but 3000 might be the nicest in the game right now! This is one of those verses that make you nod, rewind, nod, rewind…get the picture. Big Boi puts up a good verse, but after hearing Stacks, he gets overshadowed. FISH GREASE HOT! We have a “Katt Williams Interlude” next and Katt is talking about smoking weed, not real funny, but it’s Katt! Back to the music, we have the Drumma Boy produced “187”. On this track we have Project Pat, B.G., and 8Ball & MJG. The beat is funky on this one, MJG kills this one, I repeat, MJG killed it. Check it out! Another skit is next “The Mad DJ” and you have a return of the “mad” rapper, but its about a DJ this time. Not too interesting, definitely not making the cut. Mr. Porter produced the next joint “Beneath the Diamonds” featuring Twista, Devin the Dude, LA, and Mr. Porter pulling double duty. The beat is real smooth, and with Twista and Devin putting up some nice rhymes, this is easily one of my favorites off of the album. CHECK IT OUT! G-Unit is in the house on the Hi-Tek produced “Talk ‘Bout Me”. On this one you got Buck, Banks, and Yayo rapping over a Talib Kweli beat. The beat doesn’t fit the rappers, so you have a bad mix on this one. The hook is bad, the beat drowns out Banks, and Yayo spits the best verse, so that lets you know that this wasn’t a good fit. Willie the Kid makes another appearance on “No More” along with Lloyd and T.I. I like this song. You have T.I. the real T.I. on this song. This is what he does best, storytelling! HOT SONG! Diddy gets a whole minute to get his shine on “Diddy Interlude”, and be Diddy! Back to the music, next is “Throw Ya Sets Up” featuring Joc, Jadakiss, LA, and Willie the Kid. The track provided by Neo da Matrix (best name in the game) is sick, so sick that it needs toilet paper, but don’t think it stops there, no, Joc, Jadakiss, and WTK put in work on this one. Yes, I included Joc in the equation! The Runners produced the next track titled “Aye” featuring Young Dro and Big Kuntry King. Dro beats the track with some hard lyrics and Big Kuntry did his thing, making this one of those “hood songs”! Next up is the Lil’ Jon produced “Grillz Gleamin’” featuring Lil’ Scrappy, Bohagon, Diamond, and Princess. The hook on this one is sick, the beat is tight, and the youngsters put together a good club song! Who knows, grillz might come back? But check this one out! Speaking of grillz, Paul Wall, Slim Thug, Lil’ Keke, and Killa Kyleon shows up for “Gettin’ Money”. Houston is in the building! The beat is real smooth on this one, and the rhymes compliment the production. But what stands out is the hook, “I’m getting money, staying up on my grind, I got the Benjamin’s and Jacksons and Grants on my mind!” CHECK FOR THIS ONE! The Clipse and Pharrell put in work on the song “Cheers”, but you have to check the last verse by Malice, where he clearly is going at Wayne! Wow! Hot song, sounds like a Jay-Z beat, but they killed it! The album closes with an “Outro” about the raid, which it makes light of the situation, again.

Bottom Line:
This album was good, it still had that mixtape feel, but I think that is what Drama wanted. Not really used to getting mixtapes at Best Buy, usually from my favorite Nigerian! But this was solid, put together well, and should keep the core audience happy. Good production, big names, and hard lyrics don’t lose. So Drama, consider this one a “W” in the win category. He proved that everybody eats when he does something.