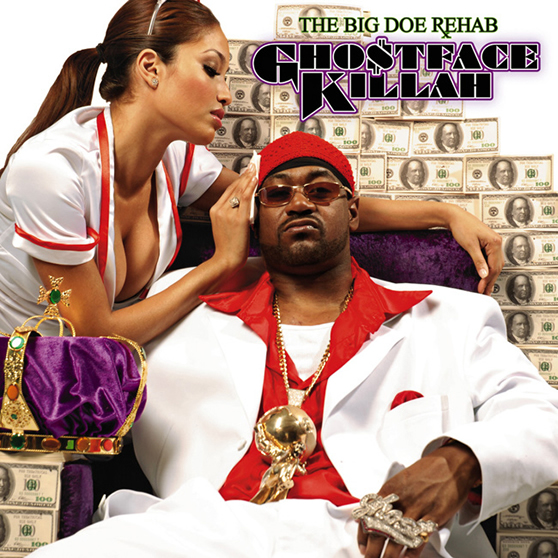 Ghostface has been one busy guy the last 21 months. Releasing his third, yes I said THIRD album in that time frame. That shows how his grind is, putting out quality music in a short period of time.Since the popularity of the Wu-Tang began, Ghost has always been the most intriguing one, well besides ODB, of course. Ghostface scored a gold plaque with Fishscale, came back 9 months later with More Fish, 12 months later Ghost is back in the spot with The Big Doe Rehab.

The album starts off with an intro titled “At the Cabana”, where we have some Latin music playing, and Ghost talking slick to some Ricans. Nothing major here, we have another skit from a movie re-enacted by a rapper. The music kicks off with “Toney Sigel A.K.A. the Barrel Brothers”, a killer track featuring Beanie Sigel. The production is sick and Ghost and Beans murder the track. Ghost laced us with this one, “they said that my projects should undergo therapy/we never voted/we voting for Oprah, Obama, and Eric B.” BANGER! “Yolanda’s House” is next up, with a smooth beat provided by Ant-Live, and vocals by Ghost, Raekwon, and Method Man. The Wu is reunited on the track and they brought some of the magic back. The beat is nostalgic and the lyrics are on point! CHECK IT OUT! Ghost used a Rare Earth sample on “Celebrate”, where Ghost kills the guitar riffs. The beat is tight, the hook gets old after a while, but the song is still HOT. Ghostface continues to use sample heavy music, but that works for him, on “Walk Around”, we have the same thing. Ghost is in storyteller mode and gives us a good story. BLAZING. On “Yapp City”, Ghost’s son Sun God makes an appearance, but this song is one that is forgettable. Not because it’s terrible, it’s just boring. SKIP! Moving along, we have “White Linen Affair (Toney Awards)”, where Ghost swag is evident at the way he attacks the track by Frequency. He names everybody in the game in the song, which is why this song is so hot! The sampling continues on “Super GFK”, this time he takes a page out of Redman’s book with his version of “Superman Lover”. Ghost did his thing on this one, BANG THIS ONE! Raekwon and U-God assist on “Rec-Room Therapy”, the song is decent, just didn’t like U-God’s verse. He could’ve been left off. Next is “The Prayer”, which is something soulful, no rhyming, just some inspirational singing. On “I’ll Die for You”, Ghost gets deep on us, the lyrics are on point, but the track is on the boring side. That doesn’t kill the song, just dulls it out a little. Cappadonna jumped out of the cab long enough to spit bars on “Paisley Darts” along with Rae, Trife, Sun God and Meth. The song is BANGIN! That is all I have to say about this one! Raekwon makes another appearance on “Shakey Dog Starring Lolita”. This is one of those songs where Ghost and Rae give you a visual. As a matter of fact, that is how Ghostface rhymes. This one is okay, kind of boring. But I blame Raekwon for that one. “!” is another skit with crappy Latin music. Maybe it fits the albums feel. I don’t know? Masta Killa and Meth join Ghost on “Killa Lipstick”. Another visual, Masta Killa puts up a boring effort, maybe because of the subject matter, but he didn’t seem to fit in with what Ghost was talking about. Chrisette Michele and her weird sounding voice appear on “Slow Down”, but in a way she fits on this song. The song is pretty hot, worth checking out.

Bottom Line:
This was a solid effort by Ghostface. Like said earlier to put out 3 quality albums in 21 months is hard. Not too many can do it, and Ghost proved that he can. He isn’t going to break any sales records, but he is going to satisfy his audience. Hell, he might even win some people over. You can’t deny his charisma or his swagger, which alone will make people gravitate towards him. Musically, he is the most successful member of the Wu outside of the Wu. Follow me?