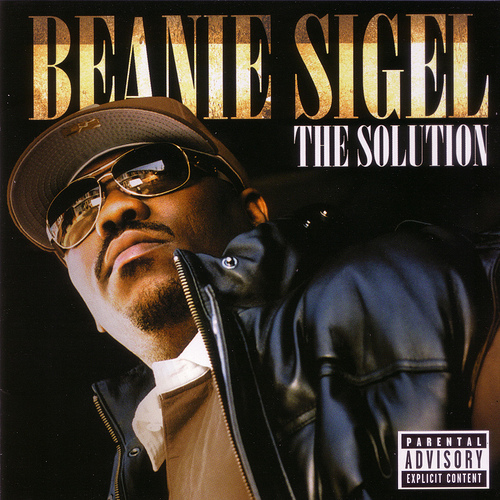 Beanie Sigel has always had this thing. No, I really don’t mean star power or anything like that, just this whole tough guy thing. Now while most rappers will boast all day about how tough they are, some rappers actually give off that air. Styles P has it, Freddie Foxxx has it, shit, even the late great Pimp C had it. It’s just a thing that tells you that maybe a guy really got down in the streets at one time or another. Sigel just wasn’t a tough guy from South Philly though; he got praises from all over Rap community for his actual rapping. Scarface has always been a big fan and who can forget Nasir’s line on “Either” towards Jay-Z; “Compared to Beans you wack.” Well even with all this, some Gold plaques, and a spot on Roc-A-Fella, Beans career has been stagnant in the last year or so. His State Property crew fell apart, then he was held up in label limbo when Dame and Jay split, he got shot a few times, did some jail time … well you can see this brother has been threw a lot. But, now with all that all the way, Beanie Sigel is finally set to release his fourth album, The Solution. Let’s find out if Sigel finally is ready to take that next step.

1. “All Of The Above”
Featuring R. Kelly; Produced by The Runners
This is the first single off the album. I felt anybody could have rapped on this track, plus I really don’t think Sigel rode the beat that well. If you have heard any of the 200 hooks R. Kelly did this year, you really not missing anything here.

2. “Bout That”
Produced by Cool & Dre
I’ve been playing this song a lot for past week or so. At first listen, I wasn’t really feeling it much. But after more listens, you hear how Cool & Dre flipped Soul II Soul’s “Back To Life” and it draws you in. Beanie lines are a bit flossy for my taste, but he matches up to the song well. This is not only one of my favorite tracks on the album, it maybe one of my favorite songs out right now period. Oh yea, see can you catch the DipSet/Jim Jones diss.

3. “You Ain’t Ready For Me”
Featuring Styles P; Produced by Dame Grease
The Beanie Sigel/LOX kiss and make up affair continues here. Actually it a real genuine collaboration because Styles and Beans go back and forth for the whole song. If you like gangster/thug shit, you’ll like this one right here. Good to see Dame Grease still getting some work too. This is an album track, but a good album track.

4. “Go Low”
Featuring Rock City; Produced by Eric Hudson
This song here has a reggae feel to it thanks to the hook and ad-libs. (Apparently Rock City is a reggae solo artist). It’s more “Bad Boyz” than “Welcome to Jamrock” though. Beans touches on the Roc situation here a bit but not much. Song was kinda boring to me though.

5. “Gutted”
Featuring Jay-Z; Produced by Reefa
Compared to other Jigga and Beans collaborations like “What We Do” and “It’s On”, this sounds uninspired. The song is not bad, just not as good as the others. The song basically talking about fake ballers and how they almost go broke trying to keep up. Beans does his thing; Jay-Z does his thing. Something is missing though.

6. “Pass the Patron”
Featuring Diddy, Ghostface Killah, & Peedi Crakk; Produced by Rockwilder
You see the features here right? Doesn’t mean shit. On the hook, Diddy jacks T-Pain’s style and sounds ridiculous. The beat is boring. Ghostface tries but sounds out of place here too. The whole thing is terrible to me. No skip though; check out this car wreck for yourself.

7. “I’m In”
Produced by Chad West
This one here has Beanie Sigel going at the ladies and doing his best “Excuse Me Miss” impersonation. I never really saw Beans as much of a ladies man; to me it sounds contrived. The hook utilizes Bigge’s line, “Once she grin I’m in, game begins”. Not really feeling this one that much.

8. “Hustlas, Haze and Highways”
Produced by Dre & Vidal, Dirty Harry, & Don Cheegro
On this one, Beans is high and laid back. It reminds me a lot of “Imaginary Player” since he’s pointing out the flaws in the game right now. A little too much of the jazz horns on the track for me though; kinda bland too.

9. “What They Gon Say To Me”
Produced by Dre & Vidal
Beans finally gets back on track here. With the beat being kinda hard, it gives Sigel room to spit; “Very seldom to I do the right thing, that’s for Spike. And I don’t play with you kids, that’s for Mike. You niggas ends is ‘Paper Thin’ that’s for Lyte”. Not the best track but better than the previous five. The track uses the “What The Gon’ Say To Me” line from Jay-Z’s “What They Gonna Do” as the hook.

10. “Judgment Day”
Featuring Ozzy Osbourne; Produced by Dre & Vidal, Dirty Harry, & Don Cheegro
The paring of Ozzy and Beans seems kinda weird to me. But alas, this is just a sample; I just don’t think Ozzy Osbourne even knows who Beanie Sigel is let alone jump on a track with him. All that aside, I like the heavy metal themed track; it shows Beans is trying to expand artistically.

11. “Rain (The Bridge)”
Featuring Scarface & Raheem DeVaughn; Produced by Reefa
This song is a tribute to the homies trapped in the belly. Even though this subject has been done a thousand times Beans and especially Face, sound sincere here. The hook is also nice.

12. “Dear Self”
Featuring James Blunt; Produced by Dre & Vidal
Yep, this song features the same James Blunt who did “You’re Beautiful”. Well, not really; just like with Ozzy Osbourne, it’s another sample. The actually sample is not bad though. The song is a deep song that has Beans conversing with his self about his inner battle. When Sigel gets deep like this, this is where he is sometimes at his best.

13. “Prayer”
Featuring Raheem DeVaughn; Produced by Dre & Vidal
This is the obligatory “religious song” that ends a lot of rapper’s albums these days. While this is not a low rate song and I like it a little; Beans sounds a lot like Scarface. When it came on I was like, “It doesn’t say here that Scarface is on this song.” But another good song that has Beans asking deep questions.

Bottom Line:
This is definitely Beanie Sigel’s most mature album to date. While this is not a bad thing, it’s not his best. I’m not used to him taking about money, cars, and clothes as much as he did on this album. I’m used to the thugged out/ prison yard Beans. While there are still a few gems here, this is not Beanie Sigel breakout album we’ve been waiting for.