Gucci Mane – Back To The Traphouse [Review] 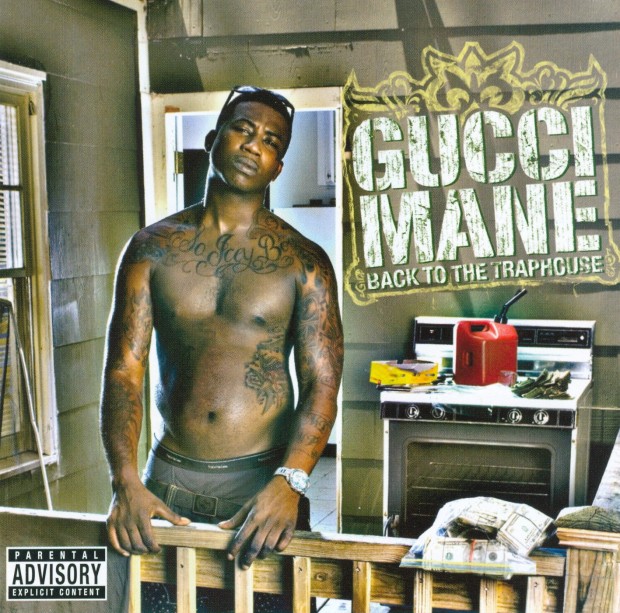 Okay folks, I’m back at ya once again with another album review for the ’07, I decided to review Gucci Mane, even though I’m not a fan of his music (I did like that “Trap House” song though; that’s my shit). However, Gucci Mane drops another album Back To The Traphouse. Here’s another rapper who beat a murder charge! I tell ya, people with money can do just about anything. So therefore I went ahead, and listened to the album since I’m a music man, and I don’t discriminate especially with me being a Southerner. Does this album make you want to go to the Traphouse and start up your own organization? Well we’ll see about that one, huh.

2. 16 Fever
The chorus on here is terrible, and I’m just not feeling this joint. The beat is okay but it’s your typical material. I don’t know what to really say about this joint, I listened to the whole thing and I’m not digging this at all.

3. 15 Minutes Past Diamond
“I shoot Bullets/ while you shoot dice”… Hmmmm… It’s your typical shit; you can’t really get too complex or creative with this joint. Skip this one quick!

4. I Know Why
(featuring Pimp C, Rich Boy, & Blaze-1)
I like the beat to this one, its something about this beat I like. I didn’t say I like the song but the beat is good though and I don’t know why. The late great Pimp C makes an appearance on here, also Rich Boy, and Blaze-1. Hmmmm, not really feeling this joint as a whole. If you like lyrics, then this song isn’t for you. Also this song is typical, not nothing too creative at all. Next

5. I Might Be
(featuring Shawnna & The Game)
This song has been out for a while. Shawna and The Game make an appearance. The Game delivers an okay verse on this one; he had the best part on the song if you ask me. I’m not feeling the “Yaaaahhhhhh!” part at the beginning, he says it with no feeling, and it’s annoying. I’m not feeling this song at all either.

6. What I’m Talking Bout
This track is hot; I like the beat a lot. Once again he kills it with the “Yaaaaaaahhhhhh”. He spits about flossing, getting a woman drunk to take advantage of her, and etc. It’s your typical shit once again; I’m not feeling it but that beat is dope though. I can’t front.

7. Bird Flu
This beat is obscure in a way; basically ya’ll know what he is talking about when he says bird flu. It’s not too complex to understand. “100,000 dollars murder charge, I made bond”, so he is making sure people know that he live by his rep. “I got bird flu, in the summer its Christmas”.. Uggghh! I know what he means but I’m just not feeling it, and its so cliché. The way he delivers the verses are horrible. Skip

9. Jump The Line
Too many lines about 28 inch rims and icy jewelry. I’m not really feeling this joint at all. Its okay, but it will not get play in my ride.

10. G-Love (U Don’t Love Me)
(featuring LeToya Luckett)
Wow, that’s all I have to say about this song. Latoya Luckett is singing on the chrous. Gucci messed up the song by saying “Yaaaaaaahhhhh!!” again and he definitely didn’t have no feeling when he said it. I had popped in this song and it sounded alright at first until he said “Yaaaaaaahhhh!!” Skip, I don’t like this song and I’m being honest as Abe.

11. Stash House
There he goes with “Yaaaaaaahhhh” again. This is like a remix to “Trap House”, I liked the original though, that song was dope and that beat was dope as hell. This song is okay, not too bad but it’s your typical stuff. I heard a lot of tracks like this over the year, so nothing spectacular here folks.

12. I’m Cool
I’m digging this beat to this one. For some reason I kinda like this song, but it’s not all that. Lyrical content isn’t the best but he does the best he could do “I rock so much ice, I should have brought a cooler”. Like I said, he does the best of his ability. Once again he is annoying me with “Yaaaaaahhhhhh”. He doesn’t say it with feeling

13. I Move Chickens
Hmmmmmm, skip. I’m not digging this song, I’m sure almost everybody know the concept to this song.

14. Ballers
(featuring Shawnna)
Another song with Shawnna. I could hear them playing this at the club or something. Teenagers would probably love this shit, but it’s okay. This song isn’t terrible but it’s not creative nor a chart topper either. Also Gucci Mane tries to sing or whatever you call it. I’m not digging that either, and once again that “Yaaaaahhhhhh!” is annoying.

Bottom Line:
Okay folks this album is very clichéd; I’m being honest. Would you rather for me to be lying and say this album is a classic? Well I’m giving it to you raw and being very honest about it. This album got to go back to the drawing board. I mean its club material but longevity is the key. Club artists don’t stay in the game long, look at a lot of artist over the years that try that, and where are they at? You got to have some kind of skill and appeal to stand out in the game. Why you still have Outkast, UGK, Jay-Z, Common, Scarface, and must I need to name more folks? They balanced and actually have skills. I mean Gucci isn’t the most terrible artist I ever heard, but he is close though. He and Jeezy styles are similar, but I dig Jeezy way better. He got to work on that “Yaaaaaaahhhh” better, because it has no feeling at all and it’s repetitive. I’m not down talking Mr. Gucci Mane, but in order for me to show mad respect you have to drop a GEM or at least be kinda clever with some stuff and prove me wrong. I do give Gucci props for beating that murder charge, and defending himself, that’s some G shit. I respect that but when it comes to music…. let’s say music isn’t for everybody. I’ll leave it like that.