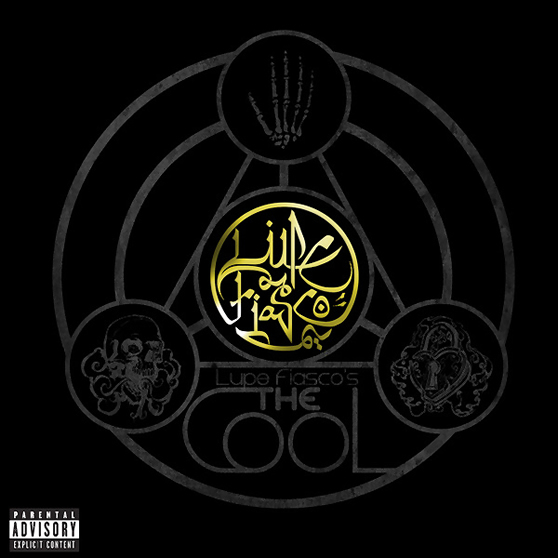 I wasn’t really impressed with Lupe Fiasco’s last album, Food & Liquor. While I liked some tracks off the album and I know he’s talented and people keep telling me he’s talented, I never was a huge fan. I liked the fact that he was different from the average rapper, but that album was at times boring. But then the material I heard from an advance copy of The Cool had me curious and a little excited. Will this be the album that gets Lupe critical and commercial acclaim? Let’s find out.

1. Baba Says Cool For Thought
Featuring Iesha Jaco; Produced Iesha Jaco
The album starts off like Lupe last one, Food & Liquor. I sometimes think poetry on the intros of albums is kinda played. The girl speaking the poetry, Iesha Jaco, is saying some real stuff though.

2. Free Chilly
Featuring Sarah Green & GemStones; Produced by Soundtrakk
Nice laid back beat on this one. Hold up; where’s Lupe? Yea, Lupe doesn’t show up on this track either; just singing. I guess this is a shot out to a locked down friend or something; a weird way to start an album.

3. Go Go Gadget Flow
Produced by Soundtrakk
Okay, here we go. Lupe finally starts off the album with a rapid style flow over a bouncy track. Here he’s basically repping his city and telling you whats been going on since his last album. I’m actually surprised because I wouldn’t expect this kind of track from Lupe; surprisingly good track. The hook is crazy.

4. The Coolest
Produced by Chris & Drop
Now you know sometimes Lupe goes a little deep with the metaphors. He really goes all the way on this one. I could be wrong but I think he is referring to Hip-Hop as a lady who will give him everything. If I’m wrong I’m sorry; it’s late. The track itself is nice and continues the mellow feel of the album complete with choir sounds. Nice.

5. Superstar
Featuring Matthew Santos; Produced by Soundtrakk
This is the first official single off the album. At first listen I wasn’t really feeling this one. But someone urged me to give it another chance and you know what? I started liking it. You gotta give Lupe credit for not trying to do another “Kick, Push” for his first single. Did anybody see Lupe doing his best Kanye impression in the video?

6. Paris, Tokyo
Produced by Soundtrakk
Here Lupe is talking about taking a trip with his girl. But you know Lupe, he could be talking about a skateboard or some shit. The track continues the smooth vibe of the album and Lupe’s rapping continues to impress me.

8. Gold Watch
Produced by Chris & Drop
This one right here is the banger. When the song starts off you gonna think the song is messed up because of the weird loop. When it actually starts, Lupe goes into about what makes him cool and just kills it. The beat is kinda hard too. It’s songs like this that makes Lupe. He names items that he likes (Goyard bags and green Now Or Later’s) and doesn’t care what anybody thinks. Hey Lupe, I like Street Fighter and Japanese manga too. Just kidding; not really.

9. Hip-Hop Saved My Life
Featuring Nikki Jean; Produced by Soundtrakk
Lupe shows off his storytelling ability on this one. He tells a story of an upcoming rapper trying to do the right thing and how Hip-Hop music gave him another path in life. It gets pretty intricate since Lupe includes details like the rapper’s MySpace friends count. The beat is also nice and is an excellent backdrop for a good story.

10. Intruder Alert
Featuring Sarah Green; Produced by Soundtrakk
Lupe Fiasco continues to show more of his storytelling capability with this one. The piano laced track backed story is about a girl who is raped and reluctantly lets another man into her life. It’s songs like this that we need in Hip-Hop. The music is supposed to tell you what’s going in the world.

11. Streets On Fire
Produced by Chris & Drop
The beat on this is a almost too techno for me. The hook is okay though; I think it’s is a sample. Lupe still flows though. Okay song.

12. Little Weapon
Featuring Bishop G & Nikki Jean; Produced by Patrick Stump
Lupe rhymes from the point of boy solider in a foreign country. I didn’t love the song but I can still see its point. The military like drum roll adds more to the effect and theme. Bishop G rhymes last while Nikki Jean once again provides the hook.

13. Gotta Eat
Produced by Soundtrakk
This is the one where Lupe uses hamburger and food metaphors for street hustling and such. It’s shit like this that the rap nerds will go crazy over. By the way, why isn’t Soundtrakk a more in demand producer? This is another beat that shows this guy can really produce.

14. Dumb It Down
Featuring GemStones & Graham Burris; Produced by Soundtrakk
Here is the street single for the album. Over a slow synth-heavy beat, Lupe explains why, despite heavy criticism, he will never dumb down his lyrics. When I first heard this in September, I liked the direction Lupe was going. He goes real abstract on this mixtape banger. The hook is awkward at first, but it fits. The video is crazy.

15. Hello/Goodbye (Uncool)
Featuring Unkle; Produced Lupe Fiasco, Chris Goss, & Unkle
This might be the first song I really not feeling. The song sounds like Pop/Rock to me but hey, I guess you might can attribute that to Lupe jumping behind the boards. Check it out if you might be into that kind of thing.

16. The Die
Featuring GemStones; Produced by Soundtrakk
Lupe, alongside rapper/singer GemStones (formerly Gemini), returns to the rapid fire style of rap from earlier in the album. They go back and forth surprisingly well about beef and guns. Up tempo bouncy track; it’s not long but still good.

17. Put You on Game
Produced by Simonsayz
Once again Lupe takes the perspective of an inanimate object. This time it’s drugs. Yeah, on this album Lupe has been a cheeseburger, boyfriend of Hip-Hop, and a boy rebel solider. While he once again shows that he is talented, it still can be a bit much this late in the album. Not a bad beat though.

18. Fighters
Featuring Matthew Santos; Produced by Le Messie
I’m finally stating to realize that Matthew Santos sometimes sounds just like Adam Levine; just a thought. This is synth-heavy song dealing with…well, I really don’t know. I think is a song dealing with lost but you never know. It reminds me of Kanye West’s “Roses” because the hard drums never really drops in. Not bad.

19. Go Baby
Featuring GemStones; Produced by Soundtrakk
This song sounds like something you might here Andre 3000 on; maybe even Gnarls Barkley. Lupe and Gem sings on the track for the most part. Of course it about girls but it’s a little different. I guess it an okay way to end this album.

20. Blackout (Bonus Track)
Produced by Soundtrakk
Lupe does a stop and go flow on this one over a fast beat. It’s nothing special but hey, it’s a bonus track. It’s okay.

Bottom Line:
With 20 songs, Lupe definitely gives you a lot to listen to. This is a good and bad thing though. While it’s a lot of music, it can get overwhelming for the average listener that’s not a Lupe Fiasco fan. But for an avid Hip-Hop fan, this will be a welcome change. The Cool shows growth and is actually better than his previous album, Food & Liquor. For me, it was a good change from some of the music I’m usually reviewing here. This album surprised me because I didn’t think I’d like it so much. Good job Lupe, you did well.

nappyPicks: Check out the whole album; it’s a vibe.