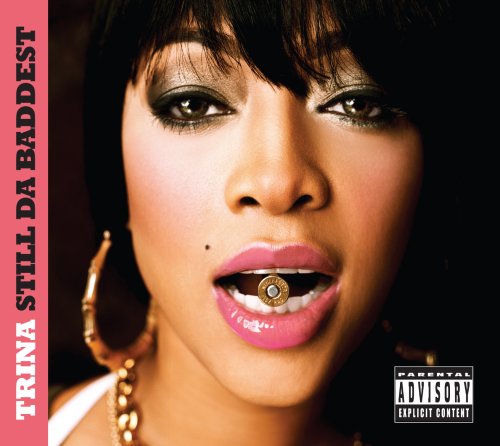 Remember when Trina stole the show on Trick Daddy’s “Nann Nigga”? The potty mouthed chick with the phatty had taken the country by storm. That was just a taste of what was to come. After pushing near platinum numbers on her debut, Da Baddest Bitch, she opened the door for the Southern female rappers out there. But after a disappointing second (Diamond Princess) and third albums (Glamorest Life) moving 490K and 390K units, respectively, Trina found herself at a career crossroads. She has been through a public relationship with Weezy, got a new look, and now is the time if ever to drop something if you’re from the Sunshine State. Can Trina re-create that magic again? Let’s find out!

Intro
Produced by Chris “UNO” Chancelor
Scientists are building the perfect woman, and guess who they put together…you guessed it Trina!

Still Da Baddest
Produced by Young Sears
The title track off the album has Trina letting the females in the game know that she is back to reclaim the throne. Calling herself “Hurricane Katrina” she put it out there that “ya’ll gone learn to respect the queen!” The beat on the song is pretty tight and I can see a lot of ladies loving this one.

Killing You Hoes
Produced by B-Sides & Killa Nova
This is the song that has Trina stunting on these girls. Doing her best Plies impersonation on this song, which is pretty funny to hear her do it. But check her out on this one!

Single Again
Produced by J-Roc
The lead single off of the album, and we have Trina rapping over a Timbaland beat. I have to wonder if Trina is sending out subliminals to Wayne on this one. In the backseat sipping on lean? That has to be…well I’ll let you decide.

I Got A Thang For You
Featuring Keyshia Cole; Produced by Kane Da Kameleon
When the females collaborate together they make some good songs. This one of those songs, it features Keyshia Cole, who is HOT right now, and they made it her second single, which is some good timing. This one will have heavy rotation with the females.

I Got A Bottle
Featuring Missy Elliott; Produced by Jay Roc
Missy makes her appearance on the album on the club heavy sounding track. Is that the only kind of music that Missy likes making? Everything has CLUB written over it. But you will definitely want to cut the rug up when this one comes on. DANCE TO THIS!!

Wish I Never Met You
Featuring Shonie; Produced by Jim Jonsin
This is the track when the breakup happened and all the regret sets in. You know how females run a guy away, and then want them back? Trina got a nice beat to rap over and she did her thing on it. Not on the lyrical side, but her storytelling blends with the track nicely. GOOD SONG!

Clear It Out
Produced by Young Yonny
Trina gets gully on this track…for real! This is the Trina that the hood dudes love! The beat requires her to get gutter on the track, and “Hurricane Katrina” delivers some gale force winds! BANGER!

Stop Traffic
Featuring Pitbull; Produced by Steve Obas
Mr. 305 lends a hand on the song, and the bangers continue to pump out. Trina spitting lines like” I don’t want coca money, I want Oprah money!” The two put together a nice song. I can see the ladies at the shake joint getting paid off of this one!

Phone Sexxx
Featuring Qwote; Produced by Steve Obas
Well this song speaks for itself; I just don’t like the R. Kelly impersonator. She talks about jumping on the chat line to have phone sex. Is that what those chat lines are for? But the song isn’t all that hot to me. I have to say SKIP!

Hot Commodity
Featuring Rick Ross; Produced by Gorilla Tek
The track on this one is BLAZING! The beat drowned Trina out, but Ross saved the day! He brought it back, because the track was too much for her to handle. But the track is nice which makes this one a winner in my book.

Bottom Line:
I really had to step out of the box to review this album. I always wondered why certain females have to talk about sex in their rhymes to make it. But with Trina that is part of her formula. If Lil’ Kim started rapping like Common she would be shelved. So if it ain’t broke, don’t fix it! While Trina’s growth hasn’t changed much in 8 years, she is still able to make a decent album. This album won’t win over too many guys, but the females will have something to jam to. So fellas the ladies have their version of Plies now. Well since she was out first, maybe he is the male version of Trina! This album had more hits than misses so I have to consider this a win for the BADDEST BITCH!

Downoad: Trina feat. Killer Mike – “Look Back At Me”