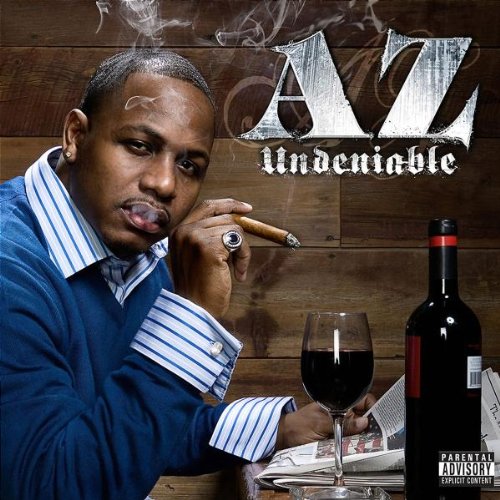 The younger generation is screaming for the older guys in the game to hang up the mic. The older generation is determined to mush the young cats by asserting age ain’t nothin’ but a number and turning back the clock while chanting 30 is the new 20. The fight for relevance is real in Hip-Hop and some of our most celebrated emcees have tried some of the newer styles and flows with little to no success. Does AZ follow that same pattern or just keep it simply A to the Z?

The Game Don’t Stop
Produced by Lil’ Fame
This is the formula that made Sugar Hill the hit that it was. The track is beautifully laced with piano and chords and AZ waltzes through this track as only he can. This is a great lead into the album and one helluva song overall.

Superstar
Produced by DJ Absolute
Another fantastic track that has you noddin’ fresh out the gate. “It’s no stoppin’ em / he’s in the books like Pac an’ em / from early homie had Hip-Hop in em.” AZ gives us another lesson in delivery (the above quoted lines don’t jump and get you until you hear them) and flat out lyricism “Supposedly I’m potent with poetry (the almighty) / most likely in the midst of the shiesty / know the DA got dreams to indict me (do the math).”

Life On The Line
Produced by Jimi Kendrix & Street Radio
If it ain’t broke, don’t fix it. The formula stands here; dope ass track, singing on the hook, AZ lyrically grandstanding at the mic. The track and the lyrical machismo don’t really mesh on this one on closer nit-picky inspection, but on the surface it works.

Fire
Produced by Nottz
One of the illest intro verses to a song I have ever heard. AZ speaks on his life and make up while flexing his creativity. “Cash Cannibal?” Damn. He is really on his shit on this one.

What Would You Do
Featuring Jay Rush; Produced by Lil Fame
I think Jay Rush is the poor man’s Lyfe Jennings but he does his thing. I think he sings a little too much at the offset, but when Cruz gets on the mic, you forget about that part. “Was a fiend for the quap / whole team blinged up / had a thing for them glocks / kept the submachines tucked.” The ability to flip your flow and cadence on demand is a lost art. Shout out to Rakim.

Dead End
Produced by Street Radio
Sounds like a lil’ Jackson 5 sample. How does it work? Fanfuckintastic. Anthony speeds up his Cruz control a little on this one and still doesn’t miss a beat.

Parkin’ Lot Pimpin’
Produced by Street Radio
This is your typical shout out to the ladies on the Hip-Hop album. The track is nicely done (sounds like another little MJ sample on the bass). The track alone saves this from being a skip to me.

Undeniable
Produced by The Bad Parts
“Drama seas / sands so white / Bahamas beach / yo’ plans go right / out of reach / Rambo flights / in sum’n two seata sittin’ up like cleavage / plain conceded, the prayer was a paraplegic / save the chatta’ my swagga’s needed (believe it).” What, you want me to say something after that? He has said it all. Best track.

Go Getta
Featuring Ray J; Produced by Emile
Ray J gets a lot of flack as Brandy’s brotha and is often tagged with the cornball description, but musically, he’s as viable as any Dream or other guy in the game currently getting praise. That aside, the idea of him and AZ together is about as easy to understand as AZ’s lyrics on one listen. That is, before you hear it. The song isn’t bad. The track may be a bit too simple to completely pull this off, but it’s not bad.

Now I Know
Produced by Nottz
I dig AZ on the more smooth R&B suited tracks, but he really shines when the track has a little more grit and bass to it. This song is proof. The track itself is good, well done, but the teeth of it has that extra little grime to it that gives a little more ground to AZ’s flow.

A Game
Produced by Fuzzy Womack
I don’t know if you can do much better than drum and base and AZ. He tap-dances all over this track but stumbles a little with the hook. I would have liked to hear this one with no hook just him and the track. Still a good song.

The Hardest
Featuring Styles P; Produced by Large Professor
Ghost steps up and trades lyrics over a dope ass track. I would love to have seen a clip of these two in the studio for this one. They sound like they had fun without sparing the creativity and flow on this one. I would have really liked a cypher type beat but again, this one works great as well.

Bottom Line:
As the younger generation continues to take over the airwaves with acts like Soulja Boy and Young Berg, the older generation tries to find artists who represent their long lost voice in this Hip-Hop nation. Some folks are starting to call it grown folks rap, for lack of a better term. Undeniable is one of the hybrids that “Cranks Dat Grown Up”. I think that the album may be a BIT too R&B for some folks even though the production itself is great. I think AZ is just one hit away from the stardom he deserves (insert Kanye West here). AZ’s consistency and continued excellence of execution is undeniable as he finds a way to remain relevant while not changing his style. He doesn’t have to because there is one thing both generations should be able to agree on, great lyrics never go out of style. Mr. Cruz has them from A to Z.