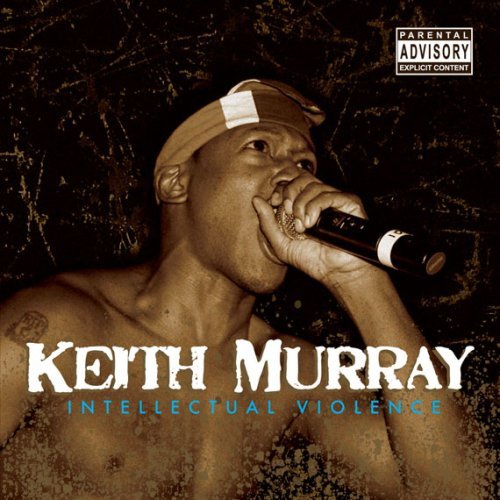 Less than a year after dropping his last album, Mr. Violence returns with another offering. His last album sold only 180k copies, but that’s his most since Enigma in 96. That said, what could he bring to the table in so few months? A reunion with Erick Sermon and Redman on the independent Legion of Doom label may inspire a return to at least the Gold success of his debut album.

Run For Ya Life
It’s a Murray joint. Nice beat, kinda early 90’s feel to it and Mr. Mental does his thing. It’s a regular Murray joint, no more, no less. Cool song.

Talk Dat Shit
Ok, maybe this is a mixtape. I won’t dwell on that(now)…um, moving on. Punchlines and witty flow are the hallmarks, along with violence, of Keith Murray, and he does it on here. I can’t help but wonder if he is mired in the early 90’s because all his tracks start sounding the same.

U Ain’t No Gangsta (Skit)

U Ain’t No Gangsta
It’s a little sing songy for the title, but maybe that irony is what he was going for. The assertion is about folks fakin’ the funk while proving how gangsta he is…all the while, saying he did this and that but didn’t talk about it. I guess it’s okay to talk about it now and still keep ya cred? I don’t know. Song is confusing overall.

Hey Ladies
I despise the hook on here, but the track is aite. Now, substance, dude is just rappin’ but he ain’t sayin’ nothing.

2Niggaz
Some dope storytelling from the man. The track plays as an interesting backdrop to the tale of the streets with a cliffhanger of an ending.

Def Squad
Some BDP sample and clappin’ over another vintage sound gives us reason to nod. An early favorite with the fun antics of Redman and Sermon reunited with Mr. Violence on this track of machismo. By the way, Murray comes REAL correct on this track.

Pen Life
Starts with some random movie lines and then comes into another track that seems lifted from something I’ve already heard. If you have ever watched the show OZ, meet the lyrical version of the show. He paints the same pictures, done well. Just reaffirmed my desire to never go to jail, thanks for reminding me.

Got Our Own Thing
A little Gordon Sollie intro about the LOD leads us into some more grandstanding. Another weak hook that tries to pass off as an anthem but it falls short. I kind of like the track though, and I love the work in of some vintage wrestling lines.

I’ll Go Crazy
Nice piano work features decent deep chord work along with some high end keys that come off pretty well. He speaks out against the shit that is getting regular play and then proceeds to murder emcees…vintage KM. Don’t bring no bullshit around you see / I’ll go craaaayzaaay is the hook that comes off much better than it looks in writing…er, typing.

What Is Trouble
Okay, I hate this song. Well, I hate the hook. See a pattern? The track is nice and Keith speaks on the sad state of radio Hip-Hop and how he is gonna fix it by taking out the lames. He damn near made me piss myself though when he said I’ll snatch out your voicebox and give it to DMC and Niggas swear that they spittin’ that fiya / I’ll tell ya moms to her face you’s a gotdamn lie’ya.

Blokka Blokka
We get some funk on a track. I love this beat (I think it’s original). Take a guess at what this song is about? Guess. Yeah, but he still does his thing. He says even in this song, I don’t respect that subliminal shit, he keeps it plain. Probably the best song on the CD.

Stalker (Skit) – Some Stone Cold in there too

Rat Hunters
Fuck you snitches, lol. What a intro. Somebody is mad. Keith spits stories about snitching in the hood…and the revenge in some cases. I’ll beat that nigga with a bat/Then caught a new charge cause he was a rat/He shoulda been thankful that we spared his life/Now we gotta go get’em with the gat. Looks better on here than it sounds, say that line above to the hickory dickery dock beat…yes, THAT hickory dickery dock beat.

Anger
Creatively, is a dope ass song. If the lyrics aren’t enough to get an emotional draw, his voice is transformed up and down from normal to demonic/screw sounding while staying with the beat. Song is pretty funky.

Don’t Hate Me Cause I’m Beautiful
Murray returns to touch on his biggest hit to date. The feel of mainstream beat and comedic lyrics make this song the best song by far. The track while simple fits perfect and the flow is perfect.

Bottom Line:
His career and life have been an uphill battle but he is making it happen. In the list of lyricists, he can easily hold his own even when not going to his homerun swing of violence. This album seems to be the child of bad preparation. The title is a misnomer as intellectually, this one falls short in comparison to even his last offering. Then when you add in some mixtape beats and overall mixtape feel with skits that loosely or completely don’t fit the album and some horrible hooks, you get an album that is largely uninspired and possibly rushed. These could have easily been the songs that Koch didn’t use for the last album but Murray believed in them. I think that his hardcore fans will still appreciate the album because Keith is, without any regret, the same guy he has always been. There is nothing new on this new album. The problem is that the stuff he normally does well gets lost in this album that seems to have no theme or overall tone, just random songs.